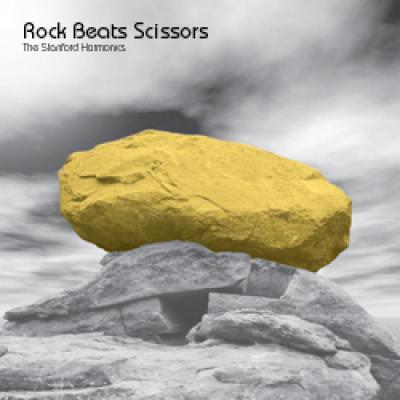 If I were making a college a cappella album, this is what I would want it to sound like. I can't really think of higher praise than that.

The best thing about Rock Beats Scissors is that you can hear what it is at all times: a bunch of young people singing. I am not so naive as to think that this great, natural sound was achieved without lots of mixing, blending, engineering, overdubbing and other studio tools. But the production always lets the voices come through. It always sounds like there are about the right number of people singing, with crystalline versions of their own collegiate voices.

Sadder Day is my favorite song, a big arrangment topped by a terrific solo from Fiona Lawson. As part of the class of 2006, she probably doesn't share my personal experiences with the 1980s landmarks sprinkled throughout the song. But she sings gloriously. The bass intro to Running Away is a perfect follow-up, keeping the mood sublime. The rest of that song doesn't quite keep up, but the tone for the album has already been set.

I loved the energy of Paid My Dues and the audacity of Porcelain. Daniel Holbert delivers a great solo on Annie Waits, making the best of a song that is weighed down by tuning problems. The vocal percussion is great throughout the album, and the songs are different from one another, so you don't feel stuck in the land of Blind Jars of Cold Clear Matchbox Goo.

This album is great. It's so great, it lets itself not be perfect in a few places, just so you can tell it's real. It is real, and it's really wonderful.

The Stanford Harmonics' Rock Beats Scissors is a great album. Most tracks are excellent. Although some fall short, they are made up for by the album's easy listenability.

The album is very together and even, polyphonically and polyrhythmically. The group makes judicious use of studio effects (the video-gamey whine on Sadder Day; bass not overly octaved or pumped; percussion clean and unobtrusive; generally well-mixed parts).

The Harmonics' interesting arrangements feature moving parts like independent melodies, infrequent and thus effective use of words instead of nonsense syllables in backing voices, and percussion systematically varied around verse, chorus, bridge (I like the pops, claps, and snares of Medicine). Occasionally this relentless elaboration lets down. Lady Marmalade is too busy, too audibly hyperkinetic like the song's recent video (a poor man's MTV version of the far superior film).

Part of the album's success lies in the singers' adept interpretations. I rarely felt that the singers were not all in agreement on the feel of a track (Sadder Day is whimsical, Bring Me to Life intense, I Hope You Dance appropriately hopeful and wistful). Sometimes, like many collegiate covers, the songs bite off more emotion than the singers can convincingly chew. On Bring Me To Life, the men are no Linkin Park; on Lady Marmalade, the bridge-rap sounds posed. And once or twice the arrangement forces conflict between the voices (on Human Beings, the basses' "oh-way-oh-way-oh-way-oh" doesn't jibe with the song's hopeful melancholy). But the results are never embarrassing, just slightly cute.

Some of my favorites include Bring Me To Life, I Hope You Dance, Acoustic #3 (it is amusing to me that in a cappella land, 'acoustic' apparently means 'without vocal percussion'!), and Porcelain.

Aside from the last, my favorite songs were all arranged by current members of the group, a fact that bodes well for the future. The same may be said about the soloists. Daniel Holbert will be around another couple of years (singing more like Acoustic and less like Annie Waits), as will the sirenish Vicki Pariksh. A good album to get, and a good group to watch for in the future.

Wow. That was my first thought when I started listening to Rock Beats Scissors, the sixth album from the co-ed Stanford Harmonics. The sound is fresh, and leaps right off the speakers.

Rock Beats Scissors is a solid album. When listened to in order, I wouldn't be surprised if the first four tracks have given a listener a heart attack from the constant excitement. The opening tracks have tremendous energy. They are either power-pop or alterna-pop tunes that seethe with emotion. Medicine I found particularly salient. The harmonized leads are very poignant and penetrating; the edge they have is perfect for the mood of the song. Songs by Hoobastank and Evanescence are gritty and have the perfect amount of distortion.

The true standout on this disc however is the percussion. It is consistently excellent, and drives every song, whether a faster tune like Lady Marmalade or a slower song such as I Hope You Dance. This album owes much of its success to the percussion. This is particularly evident in Acoustic #3, which is done without any VP. It seems empty and devoid of life compared to the other tracks.

The energy is only complemented by The Harmonics' precision. Percussive parts are over-emphasized and over-enunciated. In Annie Waits the group gives new meaning to the syllables "jen-jen-jo-jo-nah-jen" because of the care taken to pronounce each individual note.

Unfortunately, this arranging also works against them. While their approach is perfect for many songs, The Harmonics seems to have an aversion to sustained parts. This gives a driving, percussive force to the background vocals, but the block rarely sounds full, especially on slower songs. Paid My Dues comes closest to a full sound, and offers a hint about what would happen if the singers were allowed to let it fly. They occasionally get a few low-volume oos, but I'd like to see some louder, sustained stuff on the backgrounds.

The songs also strongly favor the women. This is interesting, as the male soloists far outshine the women soloists on almost every song. The arrangements sometimes sound like a women's group with bass, particularly Sadder Day. The basses are always full, rich, and precise, but I sometimes wonder where the baritones and tenors have gone. The women, particularly the altos, tend to take a nasal tone, so the lower women's parts end up grabbing more of my attention. Several soloists sing right through the nose, most notably Ariel on Human Beings.

Overall, however, I really liked the album. My favorite track was I Wish because of the catchy and moving bass line, something not seen enough in a cappella. Porcelain was also terrific, innovative, and effective. Production was awesome!

Rock Beats Scissors is a fine album. If the group can be more inclusive in their arranging, I'm sure their talented group will rise to the occasion.

For ordering information, visit the group's website, or email stanfordharmonics@hotmail.com.