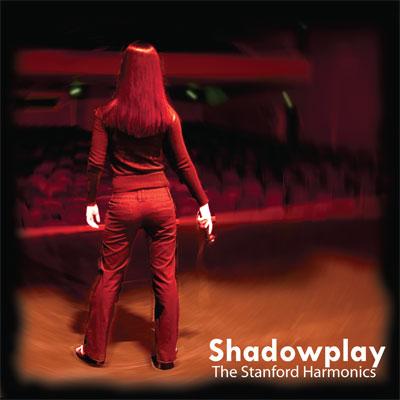 I admit, this album beat me into submission. I was predisposed to like it anyway — Rock Beats Scissors was terrific and I have a thing for the way this group always sounds like people singing, no matter how much they process their sound. But oy, every time I listen to Shadowplay my head hurts. There are no tunes in these songs, just excellent voices putting their heart and soul into shaping repetitive two- and three-note patterns. I'm impressed they got that much out of them; I'm distinctly unconvinced it was worth the trouble. It's also not all that new any more. Off the Beat staked out all this ground years ago, and "Crawling In The Dark" is as good a track as anything on this album. Shadowplay does take the loud factor to a new level — this album leaves Off the Beat's Burn Like A Roman Candle in the dust. But I won't be listening to it for fun anytime soon.

All these songs are "excellent" in comparison to the general body of a cappella music, and it's always nice to hear good stuff. That said, the sonic-wall effect gets really old. In particular, there's never enough space between the leads and the backgrounds, or maybe there's just too much going on — I always had to strain for the solo. The textures are just too similar to have that much going on all the time. And I mean all the time. There's a short softish bit at the end of Faster Faster which takes the song to a new level of greatness, the basses have a moment of glory in Waiting For You, and the album ends fabulously with Bryan "Brat" Tan ending Metallica's The Memory Remains all by himself. Otherwise, everyone is always singing, all at once, at top volume.

Brat has a great metal baritone, but I didn't care for his other effort, the aptly named Blurry, originally performed by the apparently also aptly named "Puddle of Mudd." Other soloists on the album generally handle their material well. Once again, Fiona Lawson is the clear star, making the best of the non-melody in All The Things She Said and not quite getting swallowed on Radio despite the barrage of sound behind her. Stunning voice, hope she keeps us informed of what she does after Stanford. In other notable performances, Christine Olivas does well with Labyrinth, which is actually sort of catchy, Ariel Glassman nails Faster Faster, and Jessica Jacobs nicely handles Stuck, which manages not to have a tune despite a huge range of melismatic swooping and diving.

Anyway, this is a great album of not very interesting music. Enjoy.

The co-ed Stanford Harmonics have delivered another standout album with their latest release, Shadowplay. They have kept many of the same principles that made their 2003 release Rock Beats Scissors, but tweaked their repertoire to more alternative and hard-rock oriented material.

Almost everything I said in my review of RBS remains exactly the same: tremendous energy from the backing vocalists especially evident in the enunciation of their syllables, solid VP, and consistent and well crafted arrangements with the limitation of little bari or tenor lines (much of the album continues to sound like an all-female group with bass). Arrangements tend also to be a little fuller than on RBS, creating more of a full block behind the soloist. I felt that the women in the group had a very immature sound in the block. Vowels are annoyingly spread, and the sound isn't supported at all. This jumps out of the darker texture the songs project and is particularly evident when the backing is singing actual words.

My favorite tracks were the edgier ones with a loud, biting attack of sound that doesn't quit — these also tended to be the more up-tempo, including Headstrong, All the Things She Said and The Memory Remains Soloists fare well, especially considering the uniqueness of the sounds. Each soloist tries to really make the song their own, and the diversity of their sound allows them to cover most artists well. This works against the group on All The Things She Said where the lead duet was filled with two people who simply couldn't blend or match.

Production is excellent. I particularly enjoyed the diversity of the sound presented. Whereas many groups get a set mix and all the tracks are filtered through it, each song here is treated individually, with its own unique blend of bass, chorus, solo, percussion, etc.

The net effect is one of the few albums I own that I listen to in its entirety without getting bored. While it clearly is a highly produced and edited album, I was stuck by how pure it sounds for a album almost totally filled with rock covers. There is little computerized distortion, and its evident throughout that human voices are singing. This is another great album from a group that seems to be cornering the collegiate market on harder rock music. I expect further albums to continue at this level of excellence, especially with a little tweaking of arrangements and vocal production.

The new Harmonics album has some serious monster truck force.

There's buzz about Shadowplay winning a certain large award at the end of the year, and while it's too early to tell, this album will certainly generate impassioned discussion in December. The excellent production is enough to make Shadowplay a must-buy. I don't know how Bill Hare manages to do this, but always finds the very best bits and pieces of songs to pull out and showcase. When I hear these arrangements, I think, "This is how these songs should have sounded in the first place." And, Bill Hare always does just the right thing by enhancing but never creating percussion. No generic over-processing here. You can still hear the occasional human irregularly — a slight pitch change on snare, a gasp or smack or spit explosion — and that's exactly how it should be. I want to know that my mouth drummer is, well, a mouth drummer. So thanks, Bill Hare. You've made my day.

The killer block is the other selling point for Shadowplay. Each singer has a very thoughtful, critical part, and each singer understands how to create drive. The building intro and first chorus on Breathe causes goose bumps. The raw shouts of rage in Headstrong are genuine and appropriate, and the Headstrong tempo changes are incredibly effective. Labyrinth is a delight and a track I never tire of, and the same can be said of All the Things She Said. Faster, Faster will knock you flat on your back, and "Blurry" haunts long after the music ends. The soloists offer diverse sounds and approaches. Ariel Glassman is wickedly sassy on Faster, Faster, Fiona Lawson and Teresa Ingram are desperate divas on All the Things She Said, and Bryan "Brat" Tan justifies his large fan club with his hot rendition of Blurry.

I've saved the best for last, and so have the Harmonics. Shadowplay's last track, The Memory Remains, is an incredible, pounding, aca-metal grand finale. Clearly, Bill Hare collaborated with Satan to infuse this much devilish power into the mix, and clearly, Brat was the right man to front this Metallica cover. Make sure there isn't anyone wearing a pacemaker in the room before you turn it on, and make sure you turn it all the way up. The Memory Remains will bring out the inner head-banger in even the meekest of listeners.

Disappointments? No, but I do have a few items on my personal preference agenda. I don't think artists The Corrs and Seal belong on a monster truck force album, even if the Harmonics managed to write interesting arrangements for Radio and Waiting for You. A few tracks get a bit redundant, and a few soloists are weaker members of the pack. Finally, Bill Hare got a little excited with filters on good soloists, which has the undesired effect of making me listen harder to see if he's covering up an inadequacy. But, none of these points made me love the album any less.

Shadowplay is brilliant. Buy it immediately.