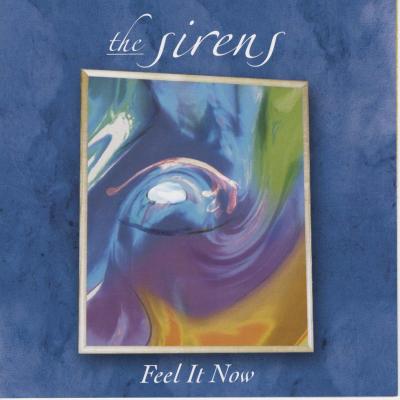 I always hate to pan a college album, but this review is unusually painful to write. Feel It Now isn't just a mediocre collegiate album; it's the poster disc for female trouble. The Sirens tumble into every treble booby trap and end up reinforcing every negative stereotype about women's groups.

The Sirens are good at things women are assumed to be good at. Their tuning and blend are quite strong. Their sweet, gentle approach to block singing works well on quiet, contemplative songs. They are quite accurate, nailing each note of descant duets.

On the other hand, there's a predictable list of problems with every track: "t-t-tch" passing as VP; repetitive, dull arrangements that thin out when they should grow; soloists without the range, power, support, or soul the repertoire requires. Worst of all, the music is just dead. With the exception of belter Molly Terrenoire, every voice on the album seems to be apologizing for taking up audio space. Occasionally, this approach works (Mary Yanovitch's bashful solo on When I Fall in Love). More frequently, block, soloist, or both sound square, tepid, and slow (Mysterious Ways; Babylon).

The Sirens did themselves no favor by producing their own album. The group just can't sound good on such an unforgiving, naked recording. The whole album is SO quiet! I had to crank the volume to the maximum just to hear it. A number of tempos are so slow that I was itching for the fast-forward button during the intro (Will You Still Love Me Tomorrow; Colorblind). The live tracks are not well chosen; they're marred by intrusive audience noise, tempos even more glacial than the studio tracks, and performer errors (Landslide flats over half a step, primarily because of the soloist).

The most important change The Sirens need to make is to improve fit between group and music. There's no law saying you have to cover U2 and Christina Aguilera; if your strength is slow ballads or jazz standards, work with that. If you're bound and determined to stick with the rock/pop angle, you need to have some workshops on natural expression in block. Get some Jackson Jills and USC Sirens albums and listen to the energy and confidence they project.

Feel It Now, the fourth CD from the University of Richmond's Sirens, has some pretty moments, but does little to distinguish itself or make it a worthwhile purchase for the general a cappella listener. The ladies in this group need to work on the basic issues plaguing many collegiate groups — tuning, energy, and tempo — in order to realize their potential and be worthy of more widespread attention.

The basics are lacking on this disc. The tuning is generally okay, but chords rarely lock and ring. Special descants also miss the mark here and there throughout the album. Tempo is a bigger problem: The Sirens take most tunes too slowly for their own good (I'll get back to energy in just a bit), and their tempos fluctuate during the songs. This is most noticeable in their percussion, although the whole group has tempo issues at times.

The biggest issue for The Sirens to work on is energy. The arrangements are largely responsible for this, although the singers could be doing much more. Regardless of what the song calls for, everything coming from The Sirens is very legato, pretty and simple. There is no kick or texture in the arrangements, no life, and little variation. For example, the only aspects of their cover of Fallin' that aim at capturing the feel of the original are the lead and backup vocalists. The rest is devoid of attitude and punch, working against the strong efforts of the leads. The arranger could have written the backgrounds differently, but there is still an onus on the singers (and the director) to bring life to the arrangements.

That being said, there is promise on this disc and talent in this group. There are some very nice solo voices in the group (Molly Terrenoire turns in three energetic solos, including Fallin', and Sarah Hormell does a nice job with My Love Is Your Love, to name a couple). They have a nice buzzy blend that works really well on When I Fall in Love and Lullabye. There is a very nice "bathing in sound" section at the end of Love Gives, Love Takes with good work from lead, harmony, and block. The low altos have a nice depth to their tone. And they put Fallin' right after When I Fall in Love, which is definitely a cute pairing. There is good stuff going on here, but The Sirens have a lot of work to do before they turn out a real zinger of an album.

Feel It Now is a solid debut disc for the University of Richmond's female a cappella group, The Sirens. The group can use this solid foundation to build much better albums in the future. But there is a slight problem ... this is not the group's first release, but their fourth.

This album has the quality of a very young and inexperienced group. The first trap is arrangements, which are lackluster throughout. The group overuses the "ooo" syllable, making every song sound pretty much the same. For instance, the transitions from Tempted, a sarcastic upbeat number, to These Boots Are Made for Walkin', a song of silenced frustration and fronted attitude, to Love Gives, Love Takes, a sappy ballad, leave much to be desired. The essence of every song is the same, with little change in emotion reflected in the arrangement, the background vocals, or even the soloists. Another trap they fall into is the singing of long, extended chords throughout. The songs have very little motion, dynamically, emotionally, or in the parts. The album gets monotonous; this is mostly the fault of the arrangements.

A look at When I Fall in Love will illustrate my point. This is easily the best track on the album. It is also the only non-self-arranged track. The women have more interesting background parts, at times doubling the soloist, other times singing slightly behind, and sometimes holding out chords. Motion in the parts makes the song more interesting. Fallin' also fares fairly well: moving parts and harmonization serve to make the arrangement more interesting.

The poor arranging is complemented by sub-par production. Most tracks have a lot of artifact, sounding much too compressed and almost like an mp3. The mix is pretty decent throughout, but there could always be more percussion on tracks that feature it. This is overshadowed by the poor quality of the recording, however. If these girls worked with a better studio, and I think more importantly someone with more experience mastering, the results would be much better. Landslide and Lullabye, the live tracks, are positively atrocious in recording quality, with a clear metallic ring around the lead.

The pitch in the backgrounds, with the exception of Lullabye and Will You Still Love Me Tomorrow, is pretty solid. Unfortunately, the solos leave something to be desired. The pitch is pretty bad on many of them. Few girls sing within their range (e.g., Babylon is too low, Landslide too high). This is particularly troublesome on songs with male soloists on the original. When the original soloist was in the meat of his range, it's just too low to really belt for these women; Babylon is the worst offender. Terrenoire manages a decent cover on Fallin', and Hormell shines on My Love. The rest of the solos are either bland or out of tune.

All in all, The Sirens wear the trappings of an inexperienced group. I think they have the ability to sing, they just need tools.