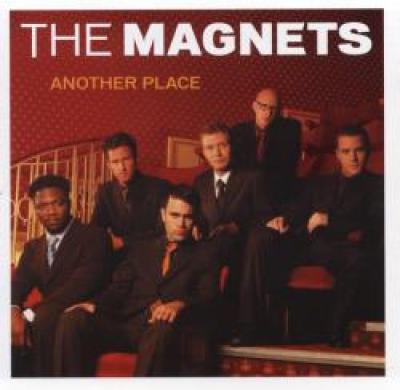 I have been eagerly awaiting the release of this album since completing my review of The Magnets' previous album, Giving It All That. The Magnets, from the United Kingdom, are one of the hidden treasures in the a cappella world, and while this release is not going to garner the group a large amount of commercial success, it is still a very needed and useful building block for a successful future.

Another Place is The Magnets' first voyage into the waters of original songwriting. Only a small handful of tracks on this album are partially or completely written by individuals outside the group. I was secretly hoping that The Magnets would get away from the covers that papered their previous release, but sadly, I was hoping for a higher quality of songwriting from such a talented group of men. It's frustrating to find that the best song on the album, Yes We Can, wasn't written by any members of the group.

The majority of The Magnets' original songs feel disconnected. The abstract nature of songs like Another Place and Similar to You left me puzzled. I would like to see The Magnets attempt songs with structure and movement, songs with lyrics that build and flow. As I listened through the album, I became more and more confused at the message or reasons behind some of the songs. As an example, here is an excerpt of the lyrics from Similar to You:

I just don't know where this is going. If the song had a nice or catchy melody line this would almost be forgivable, but even the melody line sounds aching and raw. To make matters just that much worse ... the pronunciation they use is "you-hoo". They are capable of much more than this.

There are a few bright spots in the songwriting that deserve mention. Tinsel Town and Promise to Love Me are both songs that fit the group and showcase their vocal strengths. Both songs have well-written melody lines, lyrics that function as part of the song, and a structure for the song to stabilize. These are the songs that will help lead The Magnets to many more successes in the future.

Should you buy this album? Yes. The writing didn't fit my tastes, but there is no reason to believe that it won't fit yours. The singing and production on this album are nearly flawless, and there are still enough bright spots (minus the writing) that would make this a welcome addition to any collection. I'm a big fan of The Magnets; they are a very talented vocal group. My personal expectations weren't met with this release, but give them a listen and see if they meet yours.

On Another Place, The Magnets offer R&B and jazz-infused pop originals that listeners will identify as a polished and professional body of work. The album brings a fresh sound to a cappella through a unique combination of familiar contemporary jazz-pop stylings with unusual studio effects on background vocals and percussion. Full of optimistic pop and romantic ballads, there is no question that Another Place is an exemplary piece of musicianship. The question is, will you like it?

As might be implied by its name, the group is not afraid of machinery. Half the album features fairly heavily processed background vocals. A few songs like Similar to You and No Matter What process classic, pure a cappella vowels to achieve an almost keyboard sound. Similar to You, one of the most innovative pieces of a cappella I've heard, exploits very simple oh's and oo's with this processing. Using dramatic dynamics and widely spread chords, the song is comprised of very basic musical elements but sounds alien to the a cappella world. The album's other half is more straightforward a cappella pop vocals.

The processing sometimes goes a little overboard. The title track and Promise to Love Me reminded me of Enya, with chords so verbed out and delayed that they washed over me like waves. In fact, delay-repeated syllables in Promise to Love Me made me wonder how much sound is actual singing rather than digital repetitions. In Love Since Then and Tinsel Town are similarly lush, but the repetitive effect gets a little stale.

The album features only three songs not written by The Magnets. Clearly, the group sets itself apart from 90% of a cappella recordings by this fact alone. Only the '60s anti-establishment song For What It's Worth will be recognizable to most listeners. The majority of songs are well written and catchy, but there were a few I didn't enjoy because of the delay-reverb effects, a soloist, or choppy rhythms. No Matter What is a repetitive and sugary Euro-dance tune that feels cold and artificial. Tinsel Town, a Christmas song that feels out of place, suffers from overly sibilant lyrics and an awkward melody. In Love Since Then features a David Bowie-esque solo and feels disjointed.

Usually, though, the group's bass and vocal percussionist work very closely, achieving a tighter rhythm than most groups. The percussionist's sounds are always clean, crisp and unusual. His rhythm patterns break stereotypical molds and add quite a lot to the tone and style of many songs. His sounds range from mouthy to drum-like to heavily processed. The percussion in Similar to You sounds bamboo-ish, like the fight scenes in "Crouching Tiger, Hidden Dragon", while the discotheque drum machine of No Matter What is hyperactive and sounds insectoid at times. The bass is cleanly equalized and well styled. Fun bass lines and tight rhythmic cooperation make songs like Better Than That danceable.

The Magnets show that less can be more. Songs like Searchin' and Yes We Can use silence and quick vocal percussion breaks to build suspense into choruses and bridges. Stop-and-go drum and bass in Holding Out build up the song's funk value and actually strengthen the tempo.

This less is more philosophy seems to carry over to soloists, too. Though maturely and sensitively sung, most of the solo performances are disappointingly restrained and mellow. Better Than That and Searchin' show off the most personality, but most other tracks probably need to be heard at a live show to hear genuine spark. If sensual male vocals are your thing, though, The Magnets are your boys.

Let The Magnets draw you in. Even if you don't warm to its reserved soloists or lush, jazz-pop ballads, Another Place is worth hearing just to experience its unique synthesis of familiar a cappella elements and creative studio processing.

The Magnets are saucy, suave, and oh so British. Another Place is an immediately distinctive, recognizable album. Put simply, everything about it is powerfully delightful and satisfying. As with all notably successful groups, the second you hear any song on this album you'll know exactly who it is. It couldn't be anyone but the six sexy, super gentlemen of The Magnets.

They've carved out a distinguishing sound characterized by plenty of studio magic, an airy breathiness, and bright but luxurious warmth. It really stands out from the crowd. The album hangs together aurally from start to finish, but The Magnets still find room to define each song with its own unique soundscape. Arrangements throughout are lush and complex, the melodies catchy and memorable, and the groove pleasurably appealing. Musically, these guys do everything right and then they leave you craving more.

At times the lyrics border on nearly painful, typically cheesy pop: "the night time is for sleeping baby / but I can't sleep no more / my body may be next to you / but my heart's walking out the door". But they also offer the can't-we-all-just-get-along, feel-good anthem Yes We Can and seriously powerful Tinsel Town. In the end, the songwriting overall is strong, if not especially complex.

I'm no pop music maven and don't typically care for music of that style. But I'm irresistibly drawn to Another Place. The Magnets' latest release deserves to meet with sparkling success both in the U.K. and the U.S. There's just no denying an album that makes you feel so damn good.

USA — Mainely A Cappella
Europe — The Magnets' website or amazon.co.uk