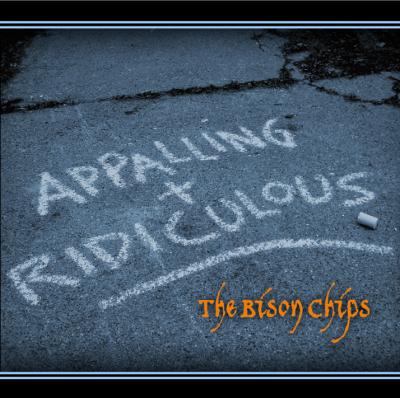 Appalling & Ridiculous from the Bucknell University Bison Chips arrives to the a cappella world a couple hundred yards short of the runway, sans flotation devices. There's not much on the album holding this flight together. They should be thankful it ever got off the ground in the first place.

It's rare to hear an a cappella album these days with such atrocious tuning. This album caused even my most musically inept friends to question, "Hey ... is that right?"

The two songs that abused my ears the most were Ave Maria and Africa. The chorus of Africa borders on comical with the soloist reaching for notes he clearly can't sing and a harmony fellow trying unsuccessfully to float all around him. Franz Biebl's Ave Maria (ironically my favorite choral piece of all time) was slaughtered by consistently flat inner voices, non-existent blend and vowel matching, diminutive instances of dynamics, and half-assed attempts at uniform entrances and cut-offs. I really should be getting paid for this.

I thought the arrangement of The Zephyr Song was a bit busy, but promising in the face of other arrangements. Walking in Memphis is a perfect example of how to ruin a great song with a lame arrangement. A slightly rhythmic background during the verse leads into a powerful chorus of ... <insert trumpet fanfare> half and whole notes on an open vowel, yay! The catchy background lyrics that play off of the melody don't enter until the final chorus and when they do, the voice leading is wrong, the melody is transcribed incorrectly, and the whole gamut is sung with as much energy as a snail in heat. (Not that I think snails don't like to get their swerve on, it's just an analogy.)

The arrangement of Walk on the Ocean is laughably almost polka-esque. If You Could Only See made me wish the title was If I Only Couldn't Hear. Honestly, all of these songs, Save Tonight, Karma Police, and See You Soon, are as bad as tracks come these days. The bottom of the barrel, though, is probably saved for the bridge in Either Way ... damn.

Consumers should avoid this album. The group might be good live, and they might release good albums in the future, but it's my opinion that this album is as bad as they come in a cappella.

Unless you are a close personal friend or relative of one of The Bison Chips featured on this album, do not buy Appalling & Ridiculous. From the photos of beer-drinking singers "masking taped" to the album jacket to the inclusion of Ave Maria and Coney Island Baby on an otherwise pop/rock album, to its incredible 18-track length, to its mix of studio and live tracks complete with crowd noise, Appalling & Ridiculous screams "Yearbook album!". Though the album was likely recorded simply for posterity, there are more compelling reasons that non-affiliated folk should avoid it.

Featuring some truly atrocious blend, below-average intonation, inconsistent rhythm, and rookie solo performances, the album surely must have been sent for constructive criticism rather than out of hope for a cappella glory or platinum sales. As such, my review is addressed to the group.

Guys, you need to learn to blend. Blend is the art of making many voices sound like a few through control of vocal tone, volume, tuning, pronunciation, entrances and cutoffs, and microphone usage. In other words, it is the culmination of most of the skills that a cappella demands. A good way to check for blend is to have a singer who is familiar with your singing voices listen to you while you're singing. If it's difficult for the listener to pick out individual voices, you are blending well. At the very least, you should notice a marked improvement in your blend if you practice sustaining chords on common vowel syllables until they smooth out and the chords ring true. Make it a warm up exercise. Alternate between singing in a stairwell and in a hallway to compare your group's tone.

Though the entire album suffers from singers that stick out because of bad pitch or vocal tone, the blame falls most consistently on the extreme voice parts. Higher tenors are often out of tune, mostly flat (intro of Zephyr Song; bridge of Walk on the Ocean; verses of When We Dance). Several of the basses are flat on nearly all of their highest notes. More damning to the group's blend, though, is the bass section's ugly, guttural tone. The tone sounds forced, as if the arrangements ask the basses to sing lower and louder than they really should (Walking in Memphis; Melissa; When We Dance; Brandy; If You Could Only See). At least they're consistent; there is almost no variation in the section's syllables and tone between songs. The mid-range voices tend to blend better just by the very nature of their in-between-ness; however, there are several moments when overzealous lower tenors or baritones project more loudly than necessary.

Three factors worsen the group's blend. First, the group is rhythmically sloppy. Entrances, cutoffs, and awkwardly stiff syncopation mark the group as being somewhat musically immature (Coney Island Baby; bridge of Blackbird; Baby Driver; Save Tonight). The vocal percussion is reasonably consistent, though mouthy, but is not strong enough to keep the group together. The group that stays together blends together. Second, about half of Appalling & Ridiculous was recorded in large concert halls. The long reverb of such big rooms is more appropriate to legato pieces or classical strings than to the more upbeat selections on the album. The result is an airy sound that highlights sluggish cutoffs. Third, the remaining tracks sound as if they were miked in small groups rather than individually. Singers sound distant from the mic, rendering chords without warmth and helping isolate voice parts from the group.

The solo performances are generally mediocre, featuring soloists with warm tone but little style, phrasing or articulation. Many soloists have pleasing voices but don't seem to know how to use them, especially at louder volumes and higher pitches where the singing is unsupported by good breath control.

All is not yet lost for the Bison Chips. Appalling & Ridiculous features some interesting arrangements, most of which were arranged by people no longer or never at all in the group. The group does put together some nice chords, during moments when everyone is in tune. Despite their musical problems, some songs are energetically sung and a little infectious. From the sounds of the album's live tracks, the group and its audiences have fun at live shows, ensuring a future for The Chips. Musically, however, all may soon be lost if the group's leadership can't shape up rehearsals and develop the skills of the current and future bison herd.

Don't say they didn't warn you. The Bison Chips gave me two aptly descriptive adjectives to use in my review.

Naming your album Appalling & Ridiculous and releasing it to RARB for review poses a huge risk if you're not a well-established, highly-praised group in the a cappella community. Unfortunately for The Bison Chips, this isn't the case. This CD, half recorded live at two performance halls at Bucknell University and half in-studio, is full of flat soloists, poorly controlled percussion, and loose background vocalists that combine for an altogether dissatisfying album.

What's most appalling is the primitive sound of the CD itself. Now, admittedly I don't know much about recording techniques, but I do know that an album doesn't have to sound like someone put a tape recorder in the room when the guys were rehearsing. Even the studio tracks sound mediocre at best. The arrangements are full of "bum"s, "bah"s, and "doo"s, lending The Chips a barbershop feel which is inconsistent with the material they've chosen to sing. From the first song all the way through to the seventeenth (Beatbox, to the listener's benefit, has no sung notes), the soloists are sorely off-key and tend to drag down the background vocalists who apparently were recorded at the same time. Every song on this album is sung too fast.

The ridiculous thing is that there's hardly any original material on here. Nearly every piece has been in the a cappella repertoire for at least five years, and while my pet peeve is overdone songs on an album, what's more criminal is the appalling interpretations. Walk on the Ocean is the worst offender; the arrangement is certainly not written in a consistent key and the beginning pitches imply that the soloist is, how shall I say this, an extremely high tenor. Africa/Love the One You're With includes an inconsistent and conventional percussion beat that speeds up the piece from its already fast tempo. It also features an awkward transition from one oldie into another, the overused Ken Purchase arrangement of the CSNY classic that I thought was too old to be done when I was a freshman seven years ago.

There's no place for a pitch pipe on an album, either, and this one is prominently heard before the musical director's count-off in the middle of the tenth track. Baby Driver and Coney Island Baby, with their typical choral, barbershop sounds, best represent what a group of this caliber should be singing. The group pulls them off half-decently, but Coney Island Baby, one of those "recorded in concert" tracks, is interrupted with howls of laughter, not only from the audience, but apparently from the group itself.

I don't mean to be so rude, but it's really both appalling and ridiculous that anyone beyond The Chips' girlfriends, families, and roommates could find value in this album. Kill the effect of using the lyrics as background words and stick to syllables. Record all of your tracks in a studio that's experienced in a cappella. Better still, don't record at all and invest in vocal training instead. Very few groups excel in both studio work and live performance. As Appalling & Ridiculous proves, the Bison Chips do neither.

Available from the group's website, CDBaby, any of the Bison Chips, or the Bucknell University Bookstore.