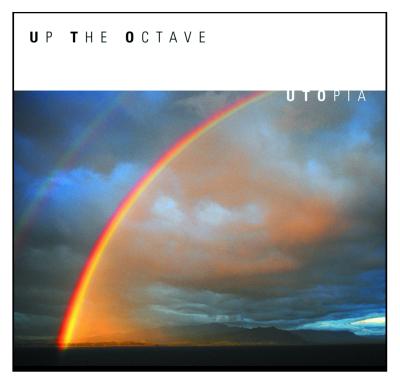 Refreshingly good album from Up the Octave, who have propelled themselves to the top of the collegiate women's ladder. UTOpia scores with good songs and great production, making the most of what it has to offer.

Song choice and timbre show that this album was made by chicks, a refreshing change from the testosterone-fueled a cappella masses. You just don't hear a whole album of quirky folk rock from the State U. Fratboys. I enjoyed the respite from Coldplay and the rest of the "serious men with angst" crew, especially since each and every song is at least good, and sometimes terrific.

This disc doesn't have much of the trebly sound that turns some people off women's a cappella. The production adds plenty of low end, sometimes with octave doublers and other add-ons. But Up the Octave has an amazingly consistent blend — the whole group has a light, thin tone that gives their sound an unusual cohesion, despite the heavy production that otherwise puts its sound squarely in line with the mixed and all-male groups. Tone is a driving force in their selection process, which helps explain how this group can sound this good despite any star voices. Frankly, the quality of the soloists isn't up to what we've come to expect from the best mixed and women's groups. But all the solos are in tune and in appropriate style, ensuring that no song drowns under a poor lead.

And some of the songs are better than good, they're fabulous. Demons is one for the ages — its heavily produced sound and driving energy allow it to hold its own with the very best collegiate cuts out there. Love Song keeps it going, and A Thousand Miles scores with more energy and some great arranging touches at the top of each chorus.

UTOpia as a whole isn't quite one for the ages, what with its generally average leads and a few lackluster bits as the album wears on. Still, this disc is a top quality college album that deserves notice by everyone on the scene.

Back in the day, I sang with Up the Octave (UTO) at one of their shows at Brandeis. At the time, I found them to be a pleasant if unremarkable women's group — nothing particularly objectionable but nothing particularly exciting either. This made their latest album, UTOpia, all the more pleasant a surprise — this is one of the better overall women's collegiate albums I've heard in years.

UTO fairly owns the technique of opening a song, particularly the slower ones. Track after track pricked up my ears with creative arranging and cool effects, from the moody opening of Demons to the ethereal soprano line of Playing Cards With Judas to the discordant, offbeat syncopations of We Are. UTO generally has a lovely block sound that is shown off in well-textured and complex arrangements. This strength culminates in the lush chords of The Angel in the House, a lovely and emotional track that deserved far greater BOCA/CARA recognition. Production is fairly strong, with enough subtle differentiation between tracks yet a consistent sound throughout the album.

It seems like UTO has made some great strides in their recording, but there are still a number of things to keep working at. Firstly, UTO's solo work was solid but unremarkable — there were few if any leads that were able to truly command the song. Secondly, tuning was often inconsistent in leads and background (e.g., the opening of We Are). Thirdly, the upbeat songs were noticeably inferior to the dark, moody ballads and mid-tempo tracks. This seems due in part to poor stylistic choices in arrangement (e.g. the sing-song quality of Alleluia, the comically high soprano lines in Manic Monday). And really, with an anthemic chorus like Shawn Colvin's Climb On (A Back That's Strong) just begging to be recreated, why would you choose to make it a pure solo line instead?

UTOpia was really a good deal of fun to listen to and was a strong candidate for a CARA album win. Here's hoping Up the Octave continues its trajectory and the USC Sirens make room for some new neighbors among the women's collegiate elite.

UTOpia is the second release from the all-female Brandeis ensemble, Up The Octave. It shows great promise for this group and is a well-balanced CD.

The album opens with a bang with a phenomenal rendition of Guster's Demons. Almost everything about it wowed me; the production values, the arrangement, the percussion, the rich tone of the singers, and especially the soloist, former musical director Becca Green. She truly captures the feel of the song and sings with great heart, soul, and feeling. While the rest of the album doesn't live up to the opener, this track shows where Up The Octave could go.

The relative success of the album stems from great arrangements and strong production. The arrangements really are the foundation for greatness, and Up The Octave has managed to amass some awesome ones. The best on the album is A Thousand Miles with interesting and effective syllable choices and movement within the parts. Most are external arrangements, though the Octave women contribute a couple of smart ones, including Manic Monday.

Typically, they sing the arrangements well. Soloists are decent but tend toward stridency, with Feldman being the worst offender. They sing with great energy and a refreshing gusto. Song choices are pretty good, though they tend toward semi-ballads that give the album a small sense of monotony. I'd like to see them try to tackle some faster tunes of differing genres, particularly edgier rock or some hip-hop. And some of their standard fare is also not good — Dar Williams' Alleluia is clearly beyond them with sloppy transitions, poor tuning, and little sense of unity or cogency; this the exception rather than the rule.

Mixing is fantastic. Low parts clearly set the foundation, and sopranos are the icing on the cake. Leads are always at a great level and the background sound is always resonant. Tasteful and appropriate effects are occasionally added in, but there is still an overarching organic feel to the album. Editing, on the other hand, is sloppy. Alleluia is the worst, but most tracks have a few measures where the parts just don't line up, the percussion runs away or gets behind the beat, or the song almost seems to skip, as if two halves were not put together seamlessly. With such a great musical sense from the producer, I was disappointed to hear these sloppy and fixable editing errors.

Up The Octave has an album to be proud of, a solid foundation for greater things to come. If the group can expand its repertoire and stabilize its membership (the group currently has a scant eleven members) this group could really go places.

To order a copy of UTOpia, please contact Courtney Whyte at cwhyte@brandeis.edu, or send $15 check or money order to: