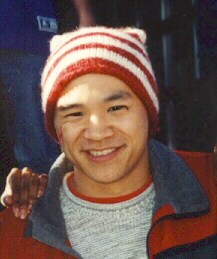 So I'm Jevan. I graduated from Harvard in June 2001 and am currently working in Shanghai managing recruiting strategy in Asia for McKinsey & Company, a big consulting corporate machine.

My road to a cappella was somewhat of a chance encounter. I grew up as an instrumental musician, playing anything and everything (including piano, violin, marimba, tenor and bari sax, and clarinet) at different intervals until I graduated high school, and participating in concert bands, marching bands, orchestras, jazz and pit bands, etc. etc. etc! Singing was something limited to the shower, the car, and the choruses of a few high school musicals.

Upon arriving at Harvard, I was blown away by my first encounter with the Opportunes, our oldest coed a cappella group. I tried out for them on a complete whim and after several callbacks later, found myself in way over my head. And here I am years later, unable to play any instruments anymore and a marginally better singer. While in the Opportunes, I was business manager, tour manager (organizing our first trip to Hawaii), treasurer, and arranged a bunch of songs in between. Unfortunately since graduation, the singing has been relegated to the shower and the car again, much to the pleasure/chagrin of my roommates and friends.

My musical tastes are fairly eclectic and range from respectable musicians (Sting, Bjork) to complete guilty pleasures (e.g., Z100 or 103.5 for NYC residents). But think heavy on the pop and R&B side, with a nice dosage of world music (Angelique Kidjo, Suphala), folk (Joni Mitchell, Eva Cassidy), whiny rockers (Death Cab, Snow Patrol), and old-school/neo-soul (Aretha, John Legend) to spice it up.

Future plans are up in the air, but some up for consideration include human capital management, grad school, doing the starving artist thing, and becoming a surf bum in Australia. Since they're all equally likely at this point, feel free to drop me some input!