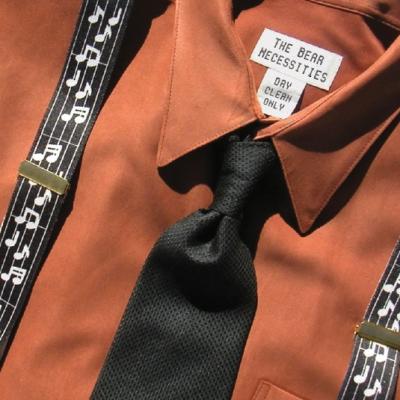 Dry Clean Only, the fourth album from the Brown Bear Necessities, is a decent product. There are a number of things to work on for future releases, but it is certainly something they should feel proud of.

The sound is pretty good. The tuning's not great, though it's rarely painful. The blend, too, is OK, though there are sloppy moments when certain parts will ruin a great ambience with a line that just doesn't fit in. The production is solid enough: not overboard in the processing department, decent balances, nice subtle effects added.

The arrangements, too, are good enough. Sometimes they're a little dull, though Adam Goins did a very nice job with both Beautiful Day and Hopeless (which has a pretty cool intro section, making nice use of the syllables "sha-na-na"). Eugene Song did a nice job quoting Take Me To The Pilot in his arrangement of Elton John's Saturday Night's Alright (For Fighting), though he went a little overboard in the final teases in his otherwise great arrangement of King of Pain. It just gets a little ADD for my tastes.

The biggest problem with this album is the lack of great soloists. No guy on this album sounds fully believable singing a lead. It's like a lot of decent karaoke. They all have their moments, but I kept hoping for a solo that would bring the technical skills, the energy, and the emotional commitment all at once, and it never came. The best soloist is Byung Huh on the Korean pop tune Poison. He is well matched with the song, and sings it with great energy and style. The rest of the guys need to follow his lead.

I have some other random issues with this album, like referring to the 20th Century Fox Fanfare as the Theme From Dry Clean Only on the track list (though it's properly credited in the liner notes) and having it start with powerful percussion joined by wimpy horn parts. Or their decision to pick Brandy as the "Bear-A-Oke" track at the end; why not pick a song with cleaner backgrounds and a solo that everyone's going to know and want to sing? I think Beautiful Day or Crash Into Me both would have made far superior choices. But I would program that final track out of my playlist regardless.

So there you go. There's certainly room for growth from this group, but this release was a decent effort, certainly worth picking up if you see a live show and want a solid memento.

Recorded over four long years, the Bear Necessities' Dry Clean Only is a solidly average male college a cappella disc, with little in particular either to recommend or condemn it.

On the upside, this is a well-recorded disc, and the Bear Necessities' ensemble sound is smooth, blendy, and in tune. A throaty bass rasp evident on the three tracks recorded in 2000 (Saturday Night's Alright (For Fighting), Straight Up, Poison) gave way to a nicer, more rounded tone in 2001 and beyond.

On the downside, the group seems to privilege blend and musicianship over solo ability in its audition process, and most of the solos on this disc are quite lacking. Mike Joseph can't hit Bono's high notes at all on Beautiful Day. I sympathize; I sang the same song in my college a cappella group, and the high A's occasionally eluded me as well. It's painful to listen to. Jarrod Fischer has a problematic relationship with the pitch on Brandy. Jake Thomsen has a nice voice, but Marc Cohn's Ghost Train requires a rich baritone, not his reedy tenor. Brad Naylor is downright sleepy on Right Here, Right Now.

One major exception to the album's solo deficiency is Poison, a masterpiece of male a cappella drag that rivals the best work of Greg Binstock. Byung Wook Huh has an otherworldly male alto voice, and the group's decision to utilize it on a track by Korean dance diva Uhm Jung-Hwa was sheer genius. Their other attempt at drag, Straight Up, doesn't work nearly as well; it sounds fine, I guess, but that song has been done to death in the past couple of years. The Bear Necessities and soloist Noam Katz have nothing new to say about it, and I found myself repeatedly tuning out.

Other highlights: Adam Goins' arrangement of Train's Hopeless is a beauty, with intricate arpeggios darting around the audio spectrum like fireflies on a June evening. Crash Into Me sounds like the old-school a cappella I fell in love with back in 2000 or so; a gorgeous, creative chordal intro leads seamlessly into a faithful rendition of Dave Matthews' beautiful ballad.

Other arrangements have major problems. Big Wreck's The Oaf doesn't survive the a cappella transition at all. This is probably because it's an awful song to begin with, sort of third-rate The Who circa early 1970s. What's My Age Again? is overreliant on unison. Saturday Night's Alright (For Fighting) contains a well-placed quote from "Take Me to the Pilot" but is otherwise simplistic and a drain on the group's energy.

Dry Clean Only is an achievement the Bear Necessities should be proud of, but it presents consumers with no compelling reason to purchase it for themselves.

Dry Clean Only is a squeaky-clean, wrinkle-free album of wholesome a cappella. The album is soft to the touch, gentle on the ears and about as edgy as a grandma-knit blanky. Much like The Pitchforks' album Honestly, Dry Clean Only is a bit of a swooner. Many songs are chick-friendly, yet not particularly exciting, with lovey-dovey themes and dreamy vanilla solo voices.

The album's sound production is typical of the big name, northeast schools: tight, clean, a little artificial. Pitch is solid, blend is fine, cutoffs are suspect, some rhythms are wobbly, and the vp sounds machined. The album struggles in more thought-requiring areas. Poor judgment stains the album, both in song choice and arranging. The 20th Century Fox Theme ushers in the first song (why?). Blink 182's What's My Age Again? is overly choral. Paula Abdul's Straight Up is painfully bad. Jesus Jones' Right Here, Right Now is limp. The last track is a solo-less "bearaoke" track. A bizarre song, presumably Korean, has no raison d'etre, as they say in France.

I was stupefied listening to Poison, a euro-dance pop song sung in what I guess must be Korean. The song comes with no warning and no precedent — there's nothing else "ethnic" about the album. The song's only hint at explanation might be a liner note thanking the Brown Alumni Association of Korea. No translation, no comment in the liner notes, no clue whatsoever. It may be part of the group's repertoire but without an introduction it seems totally out of place on the album

Otherwise, Dry Clean Only is fairly dry; most songs are not sung with genuine energy because their arrangements are lifelessly repetitive. Too often, arrangers find one decent chord, often mildly dissonant, and flog it to death (especially King Of Pain, Straight Up, Crash Into Me). These repeated chords are usually top heavy, like twenty tenors. Worse yet, they are sung on correspondingly open vowels ("ah"s, "ay"s, "bair"s — like the "Bear" Necessities, get it?), drawing yet more attention to their blockiness and repetition. Arrangements show little variation of energy, complexity or tone coloration between and during songs. Only a few songs show a darker contrast; the album feels too bright, like a photo that's been overexposed.

The worst offender, and it is really, truly awful, is Paula Abdul's Straight Up. I can't imagine many worse songs to bring back from the dead, but the Bear Necessities have finally slaughtered a song that appears to have limped its sorry, pathetic way out of the '80s. The background sits on sustained "ah"s through verses and does the lyric-repeat thing through the choruses, "straight up now tell mehhh, whoa whoa whoahhh, ahhh". The blend and tuning aren't great, either; my teeth grated a bit. Leaving their plucky soloist totally, embarrassingly stranded and unsupported, the background drops out during the penultimate Abdul badness of "how 'bout some information pleeeeeez!?". Thrice. The ending, "[pause]... Straight! Up!", is mega-lame. It's like the poor soloist lost a dare.

The Bear Necessities dull the album's only attempt at edginess — Blink 182's What's My Age Again?. The arrangement is way too choral for a punk song, and the group shows its omnipreference for block chords over layered rhythms. Dissonance added to the chords complicates a song that's supposed to be all power chords and raw energy. The soloist's energy and technique are weak. The song bounces along nicely, but that's all this song ever really does, isn't it? The spoken lyrics at the end, "huh huh yeah, what's up? Bring it on, show me whatchoo got" and laughter are crawl-out-of-your-skin uncool.

The album does have redeeming qualities. Some of these same old arranging techniques occasionally work rather nicely. Marc Cohn's Ghost Train, which almost earned a "5" from me, is the best track on the album for the same reason that Paula Abdul's Straight Up is the worst; both rely on big, wide-open chords to create a mood. Where Ghost Train's mood is dreamy and carried me on a satisfying journey from beginning to end, Straight Up made me want to denounce having grown up in the '80s. Sounding like the love child of Elton John and Meatloaf, the soloist on Saturday Night's Alright (For Fighting) made me grin. The Oaf's soloist has an odd voice and phrasing, but the arrangement's interesting chord progressions in the chorus really stuck in my head.

Dry Clean Only has some nice moments, but those moments are overshadowed by bad choices. The album left me a little mad at the Bear Necessities; I hate to see a musically competent group make dubious decisions that mar an otherwise respectable album. If you're into wholesome a cappella covers and have a high tolerance for old school arranging, maybe Dry Clean Only is for you. If you instinctively concur that Paul Abdul should have been tarred, feathered, and deported, do yourself a favor and leave the dry cleaning at home.