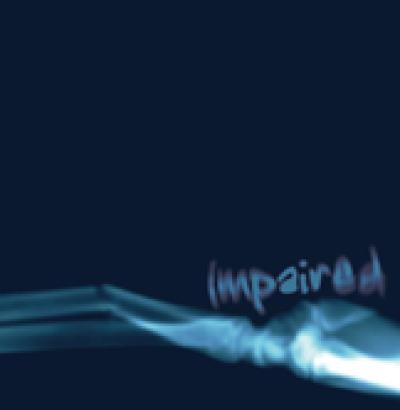 I love getting CDs from the Aires. Seriously, these guys just make some really good music. Their latest release, Impaired, isn't the balls-to-the-wall winner that Black Tie Affaire was, but that doesn't stop it from being a really well-produced, well-arranged, and well-sung album.

The group's tight sound is still intact. From their solid bass ranges up to their phenomenally utilized falsettos, these guys continue to deliver great backgrounds, creating various textures and ambiences with skill. The song selection is great. They know they are really successful with the classic rock material, so they give us Journey, Don Henley, Tom Petty, the Talking Heads, and The Beatles. They also know they handle hip-hop so well, so we've got some Outkast and R. Kelly here, too. Then they fill it out with some alternative rock, a tune from RENT, and a really nice original (Seventh Grade Dance, penned by AJ Bascom). It's a great track list that suits the group and its strengths.

The arrangements and production are great. Many group members contributed arrangements, yet the disc hangs together well as a cohesive whole. Gone are the days of oDo's name appearing everywhere at once (not that that was a bad thing), though Chris "Dizno" Masone is credited enough to earn some individual praise for his percussion on nearly every track and, more importantly, for recording and mixing the CD (with Zach Supalla and Dr. Sound, respectively). The album maintains the production quality that the Aires have exhibited on their last two releases, with only a moment or two where it goes overboard (e.g. the gimmicky and distracting panning on Oh! Darling).

Sadly, this album slipped backwards a bit, from Black Tie Affaire back towards Interplanetairey. One small slight was the reintroduction of some humorous bits that cheapen the final product. Some bits work well (I found the final banter on Remix to Ignition to be cute), but some are confusing (noises in Oh! Darling during the gimmicky panning) or downright beneath the quality of the music they're making (the end of the bird bit in The Boys of Summer) and should have been left out. But this is a small complaint compared to the real backsliding on this album: the soloists. They're competent. Some are really good. But where are the constant home runs that we heard on the previous release? "Competent" is nice, but it pales in comparison to "awesome", and "awesome" is what they need in order to match the rest of the aspects of the disc.

The sleeper standout of the disc is Pillar of Davidson. I say "sleeper" because I barely noticed it at first. It sounded great, but it was only after many listens through the disc that I found I had absolutely no complaints with this track. Great song choice, a great arrangement, and another great solo from Ian Storey make this simply a great listen.

I hope to see the Aires re-fix some of their weaknesses on their next outing, but until they make that album, I'm quite content with this offering. It's not quite top shelf, but Impaired is still a damn fine CD.

I love giving damnable praise whenever I can. And no one and nothing is more righteously deserving than Impaired, the latest release by the boys of the Dartmouth Aires.

I HATE THIS ALBUM.

THE DARTMOUTH AIRES IS THE CLOSET THING TO A POP/ROCK BAND IN COLLEGIATE A CAPPELLA TODAY.

Hate is such a strong word, but it truly was my initial reaction upon playing the disc. I also hated Black Tie Affaire at first, but it soon developed into one of my all-time favorite albums. I don't see Impaired making that same leap. But it doesn't quite live up to that unenviable task.

The album is great. The group even took the complaints that Hanna stated (and I agreed with) and brought the soloists to the forefront on all of the tracks. The guys are ever-present in the mix (which isn't always a good thing) and sing with a conviction and crispness that comes with a belief in yourself and your talent. So it's just "as good" as the last album. Most of the praise from last time carries over here.

What I miss with this album is the passion and emotional connection that was infused into each track before. The guys didn't get lazy, but you can tell that they didn't have to prove quite as much as their predecessors.

The group is completely radio-friendly overall — a great testament to its myriad of music directors, arrangers, soloists, producers and engineers. Now, add to that songwriters. As far as supporting my second statement is concerned, one simply has to listen to Seventh Grade Dance as composed and performed by AJ "Vino" Bascom. He's already an established performer with three of his own CDs. Except for a few collegiate "na-na-na" parts in the chorus, his song slips in just fine with all of the other tracks. You'd never know that it was an "original" song.

And a special thank you for including my favorite song from the musical, RENT. That was a brave choice to differ from the normal covering of What You Own and Seasons of Love. Kudos.

And boy do I hate R. Kelly.

With Impaired, the all-male Dartmouth Aires add another to the long line of albums they have created. Unfortunately, they have been unable to capitalize on the success of their acclaimed 2002 Black Tie Affaire, and here present a mediocre album.

Like some of their previous efforts, Impaired continues the tradition of heavily produced sound. This album is impeccably edited, with little to complain about in regards to tuning and presenting a thoroughly professional final product.

Unfortunately, to my ears, it just doesn't work. My first complaint comes with the balance between soloists and background. The soloists are consistently too up front, with background parts mixed too far back to truly appreciate them. While this technique may be appropriate for several of the tracks, it becomes tiresome when sustained throughout the entire album. Further, there is great energy in the background parts which just falls to the wayside. My other large complaint is the mixing of the basses. Heavily compressed, they are presented with a sonic ubiquity with almost no focus or tone; the bass is more a feeling than an actual part. This manifests itself with the basses mixed either too low leaving a bottomless sound (Somewhere North) or so loud that they supercede the other parts (Slippery People).

In the plus column for the album's engineering, instrumental solo lines (The Zephyr Song) and inner-song vocal harmonies (Ask the Lonely) come out of the mix with well-suited effects, making these small bites that occur in many of the songs a highlight of the album. Arrangements are generally decent but are often mixed too far back or computerized so much that it is difficult to differentiate inner parts or hear the intricacies of the part writing. An unlikely standout is Will I? which layers parts throughout to create a great climax. Percussion is highly computerized and generally appropriate but often mixed too far back. Soloists are typically above average but sound as though they receive quite a bit of help from the engineers. Unlike many collegiate soloists many of these guys actually infuse emotion into their performances, with Oh! Darling featuring a truly spirited soloist.

I applaud the Aires for their repertoire expansion, even if ill-conceived. R. Kelly's Remix to Ignition left me cold at first listen with its slightly obnoxious descant, but after multiple listens it stands out as a decent track despite needing a much more pointed and focused bass. Outkast's Rosa Parks, on the other hand, is almost a total failure despite a strong intro. With a weak arrangement, it is produced poorly with inappropriate percussion and annoying effects, leaving me thinking of a minimalist Buddhist chant melded with an amplified insect buzzing, over-enunciated words, and unnaturally flowing soloists that just don't have enough flava' to match Outkast.

Ultimately, I think the majority of this disc's successes and flaws come from the engineering. While its flashy setup can be fun to listen to the first time through, it just doesn't hold up to close scrutiny.

To order Impaired or any of the past recordings made by the Aires, please visit their web store.