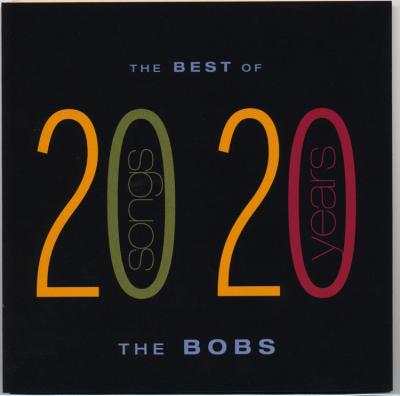 20 years is quite a retrospective. The one truth of the Bobs' latest release is that we can never see ourselves as others do. The Bobs are without question one of the most innovative, talented and quirky groups in the history of contemporary a cappella. In a genre overrun with covers and mediocre originals, the Bobs shatter expectations with funny, catchy, and often simply brilliant songwriting.

Let me school young readers for a moment: 20 years ago, the Bobs, the Flying Pickets, McFerrin, and the Manhattan Transfer made up the majority of the a cappella world. There were other groups out there — but not as universally known. These groups laid the path for so many others.

But The Best of the Bobs: 20 Songs, 20 Years should give rise to false advertising charges. This CD has a few priceless gems, to be sure, which I would gladly buy the CD to own. But I cannot imagine by what criteria it could be called "Best of". Perhaps a better title would have been, "Live versions, outtakes, and gems you may have missed."

What "Best of" offers is a few new or previously unreleased tracks with Gunnar Bob (which longtime fans will adore, btw), a few one joke tunes like Weekend in Cincinnati, some filler (Bee Bop I Love You), and slightly altered re-releases (White Room w/ Janie Bob sharing lead). But then you have Share A Load, Mopping, Mopping, Mopping and Cowboy Lips that take the brilliance of the original writing and add the layers of interpretation that can only come through live performance over time.

Like the Bobs themselves, the mix is eclectic. But what's great on this CD can only be found here. There is no second place to the Bobs. They stand as one-of-a-kind. And this CD captures enough of that to be worth your money, even if if isn't quite the Best Of it claims to be.

Many serious a cappella fans will shake their heads in disbelief when they read what I am about to write — I had never actually heard the Bobs before their Greatest Hits collection appeared in my mail. Heard of yes, but not actually heard. This review will thus be most helpful to similar Bobs virgins like myself, as I have a feeling that people who have heard their work before will have already formed a reasonably strong opinion without my input.

The reason behind my hunch is the overwhelming focus of the Bobs' work on humor. This is the kind of group whose greatest hits compilation includes songs that detail a housecat's plot for taking over the world and describe an erotic rendezvous in Cincinnati. The kind of album with track names like Giant Robot Store and Hey Coach, Don't Call Me Queer. Some of you out there will love the humor and enthusiasm that permeate this disc, particularly in the wacky, off-kilter live performances. Others will find it grating or even offensive, and lament a perceived weighting of humor over musicality. A good litmus test — do you chuckle at the concept of a song about two people meeting at a laundromat, entitled Share a Load?

And still a third group will come out where I did — with a huge amount of respect for the Bobs but with no particular desire to listen to this album again. To subscribe to a humor vs. music dichotomy in this scenario would be an oversimplification. Unlike a number of their peers in this subgenre, the Bobs bring strong solo work and interesting musical direction to the fray (tightly tuned, brassy jazz chords tend to form the framework behind their witticisms). They could probably do with a bit more of it though — too many of the songs relied on repetitive rhythms as opposed to more creative and lush arranging like the background of Weekend in Cincinnati. And I personally find humor albums a difficult sell on the repeat listenability side (think about how many times you actually go back and listen to humor-music albums like those of the Simpsons or South Park). But the first time through is pretty darn funny quite a lot of the time.

My advice to the average a cappella listener out there — this album probably won't get a lot of repeat play in your stereo. If you are particularly eager to lose your Bobs virginity, however, this greatest hits album is probably a safe way to do it. And if you hear the group is performing near you any time soon, spring for a ticket and make your first time something really special.

No a cappella group has ever come close to the creativity, wit, and brilliance that The Bobs have consistently demonstrated over the past two decades. The Best of the Bobs: 20 Songs, 20 Years is a perfect introduction to this peerless quartet.

I love everything about this group and this CD. I love Richard Bob Greene's bottomless foundation; if there's a better bass singer in a cappella, I have yet to hear him. I love Joe Bob Finetti's rough-edged rock-and-roll baritone, gentle vocal percussion, and incomparable vocal trumpet. I love Matthew Bob Stull's hyper-nasal tenor and stubborn unwillingness to blend in the traditional sense (no Bob has ever written or will ever write a song on which that's a problem). I love Amy Bob Englehardt's droll, dorky mezzo and absurd original songs such as Fluffy's Master Plan for World Domination and the new Giant Robot Store. I love old members Gunnar Bob Madsen, Janie Bob Scott, and Lori Bob Rivera, everything they brought to the group, and the way their replacements didn't fill their shoes but rather influenced the group's direction in their own rights. I love their screwball humor, even when it doesn't make any sense (Elwood Decker, Mopping, Mopping, Mopping, Cowboy Lips). I love their forays into social commentary (Hey Coach, Don't Call Me Queer, Swingers, Slow Down Krishna). I love the harmonic complexity of all their songs.

I love the respectful but wild reinvention that characterizes their covers. The Boxer takes the Simon and Garfunkel classic, gives it a funky groove, and adds some beautiful harmonic twists a la Todd Rundgren or Burt Bacharach. I won't ruin Helter Skelter for you, but suffice it to say that it certainly deserved its Grammy nomination and is, for my money, the greatest a cappella cover song ever recorded. And when they decide to go literal (White Room), I love that too.

I love that most of the CD consists of live versions of their greatest songs, a decision that yields many benefits. For one, it's not a redundant addition to the collections of faithful fans. It lets the group be even more energetic than they are in the studio; Matthew Bob's showboating on Cowboy Lips makes the original recording pale in comparison. And it demonstrates what daring performers they are. In one concert well-represented on this disc, The Bobs put all their song titles into a hat and drew at random. One of their selections was The Wind Cries Mary, a Jimi Hendrix cover they apparently hadn't performed in many years. Sure enough, Richard Bob forgot the words ("After all the jacks are in their boxes / And the clowns have all gone to bed / You can hear somebody doing something in this part appropriate to the text of the song / And some more words go in this part right here"). The hilarious results were good enough to make their greatest hits album. Not many groups can claim that.

I love this disc. I love The Bobs. Buy this now. And then buy all their other albums.