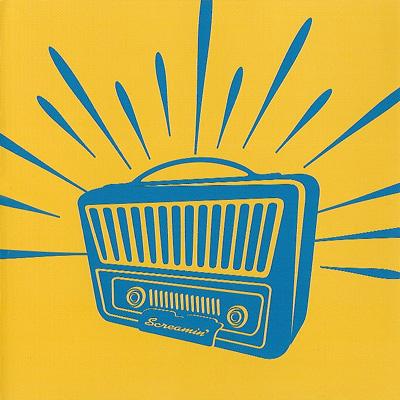 Radio Screaming, the 2005 CARA winner for Best Pop/Rock album has boosted the NYC-based sextet to the top echelon of professional a cappella bands in the United States. The album grooves along at a solid pace, with good arrangements, great soloists and just enough verve to make it one of the best professional a cappella albums of the year.

There are two definite stand out tracks on the album — Spot and I Fall. Duwende couldn't have picked a better opening track than the hip-hop Spot. The fully rapped hit, written and arranged by Geoffrey Barnes and Edward Chung, is one of the best songs of the year, and possibly the best hip-hop a cappella original song ever. Spot is worth the purchase of the album all by itself.

2005 CARA winner for Best Pop/Rock Original Song I Fall is as pretty a song as you will find. It may seem out of place as the only true slow song on the album, but it's so tender that it doesn't matter that it contradicts the rest of the album. Abbey Janes has such a smooth and gentle tone and the sultriness of her voice on the lower notes is pure beauty. Fans of Sara Bareilles' (and UCLA Awaken's) Gravity, featured on BOCA 2004, will love this song.

Gabriel Mann confessed that of all the clients he has worked with in his recording career, Duwende is the only group he has ever sought out and solicited himself to engineer (he mixed the songs, previously recorded by Chung). Coming from one of the masters of a cappella recording, that is high praise, and they do him justice. The writing and arranging are clever and innovative. All of the soloists are top notch, and the background melodies fit perfectly between the solo and the rhythm section.

One of the best aspects of Radio Screaming is that Duwende doesn't hide the fact that its music is a cappella. Unlike similar artists such as Ball in the House, Mann uses minimal effects on Duwende so that the listener can tell that it is only voices making the sounds. But the arrangements and the mixing are good enough that non-a cappella fans won't be turned off.

Not all of the tracks are winners — there are a couple of songs that dragged — but when Duwende hits the spot, they are really "up in the spot."

If variety's the spice of life, Duwende is a great chef; in the eleven songs on the album Radio Screaming, the group nails eleven distinct styles. From the straight-up hiphop of Spot to the Joydrop-esque rock of Take You Dancin' to the carefree pop of Sugar, Duwende proves that they know what they're doing in almost every style imaginable. Gabriel Mann's impeccable production makes it easy to forget the album is a cappella — in fact, it makes less sense to compare Radio Screaming to other a cappella albums than it does to compare it to the work of Top 40 groups.

For one thing, the album is entirely originals. There are maybe 4 bars of allusions to pre-existing songs, and those are all in the first track. For another, the soloists don't even sound like they have an a cappella background, as "musical training" takes a back seat to emotion and soul. The four different soloists each have their own, unique style: Abbey Janes (the lone female) is sublime no matter what range she's singing in, Geoff Barnes lays down rhymes the likes of which have never been heard in a cappella (and sings R&B quite convincingly as well), Jason Baluyut's soulful tenor seems to never run out of notes, and Morgan Phillips sings, in the words of Spot, "like he owns Rock & Roll."

This variety is great on a macro level, but after a closer listen, the album leaves a little room for improvement. Such a wide array of soloists suggests that Duwende has somewhere new to go in the future: instead of just making each song have a different feel, why not mix up the songs themselves? Why not write a R&B song with a rock chorus? Why not a pop song with a hiphop bridge? Also, while constant repetition of two-bar background riffs work for Top 40 groups, Duwende has too much talent for that. They need to step away from the easy out that is repetitive arranging, and focus more on using each member's talents.

It amazes me that even though Radio Screaming is the most exciting a cappella album I've heard to date (and one of the better albums, period), Duwende still has room to experiment and grow. To say I can't wait for their next release is a bit of an understatement.

What a great group. Radio Screaming is a stunningly professional album of original music, snazzy sound and all-around terrific execution. Anyone interested in the development of a cappella as an art form ought to own this disc and revel in its ascendency. Lots of other people should buy this record too, because it's damn good.

Any questions? Everything I am about to say next follows from the above paragraph, so if you get confused please see above. I really did like this album, but I didn't always connect with it. I attribute this to the strength of Duwende's artistic vision, which is excellent and strong and — thank the lord — different from mine.

First the sublime: I Fall is a perfect song. Great melody, gorgeous Abbey Janes lead, nice pulse, and just about every other nice thing I could think of to say about a pop song. It's also the only ballad on this album, and one of the few songs without either a comic or rap twist. Sugar is another unqualified winner, in my unqualified opinion. In a lot of the other songs, yummy textures and beats abound, accompanied by various distracting elements.

See, I like Duwende best when they're straight up. I really don't care for the sing-song tenor rap of Spot or Movin' On. It's not bad, it's just not my taste. (In contrast, I kind of liked the Beck-esque verses of Six-String Cowboy. Go figure.) I also find the profanity gratuitous. There's not a ton of it, and I'm no prude, but it seems incongruous because the sound is so clean cut. To mention the most prominent example, Blow Smoke is incredibly catchy, but it also involves listening to the word "ass" about 9 dozen times. Eh.

Anyway, if you're an a cappella junkie and you don't have this album yet, quit reading already and order one from A-Cappella.com. If you're a different kind of prospective buyer, wander through the sound clips and see if this is your thing. It shouldn't take long, and chances are more than good you'll want to buy in. After all, it's damn good.