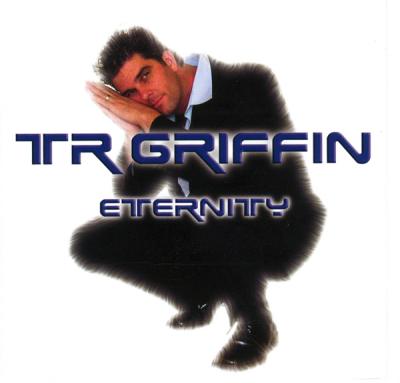 From my last four years as a RARB reviewer and from my childhood evangelical Christian upbringing, I have had ample exposure to the highs and lows of Christian pop music, both a cappella and non a cappella. TR Griffin's album of original a cappella Christian pop compositions, Eternity, is one of the weaker contributions to the genre, presenting listeners with an album of tracks that fall into three distinct categories:

Some advice from the heart to TR, whose effusive liner notes and overly earnest lyrics create an image in mind of a nice man who will undoubtedly find this review harsh if not unfair. This guy is a decent singer; the track background singing is strong, well-tuned and blended (unsurprising given his voicing all tracks, but difficult nonetheless), and energetic. Solo work is pleasant, if undistinguished. But the songwriting is so weak as to derail any sort of musical project TR's instrument can take on. And if Eternity was meant to reach out to non-believers, its heavy-handed approach is unlikely to go far. Take it from a former devotee of Michael W. Smith, Amy Grant, and David Meece - there is plenty of great Christian music out there (even pre-crossover sellout). TR Griffin will need some strong (and likely external) creative direction to join the ranks.

WARNING! If you are not a born again Christian, your chances of enjoying this album are as slim as your chances of entering heaven after you die. Cultural relativists beware: sharing Papa Ratzi's views on relativism, TR Griffin predicts no escape for those of us who are not uber-religious Christians.*

Samplings of the Gospel according to Griffin:

The album opens with a "hoo hoo shoo wah" choral wash over a VP and bass groove. A spoken voice intones: "Eternity. The endless period of time following death. The afterlife. Immortality. The question I have for you is, where will you spend it?"

The last track opens with the same groove and wash but the voice continues to provide a more graphic answer: in heaven or "in a place called Hell which is described as unquenchable fire, pain, weeping, and gnashing of teeth". Griffin closes the album leading listeners in a prayer.

If someone was listening to this album in the next room, though, you'd never guess that it was a fifteen track hellfire and brimstone sermon. Most of the album is religi-pop, sung in a way that is Rockapellian or BiTHish. Many of the songs, all written by Griffin, feature catchy pop melodies. In fact, many of these songs are pretty singable and poppy. The VP patterns are written out like a boy band drum machine. Imagine that Billie Joe from Green Day (Warning, not Dookie) got religion and took choral singing lessons and you wouldn't be far from Griffin's oversung, gushy, pop solo style.

Tracks 2-4 are romantic pop with lyrics like "Girl, wink at me with your nice moves" rhyming with "bod grooves" and "Starlight, starbright, o God, make us soul mates tonight". The album gets real quirky real fast. Funkae Monkey appears to be a Bible reference that's over my head but involves a chimp, Jesus, and God. Schwing, once a reference to popping a boner on SNL's "Wayne's World", is now some sort of Freudianly homoerotic word of rejoice, "God has made all things, schwing, to Jesus we will cling". In fact, listeners who don't really pay attention to lyrics might just think Griffin is a slightly strange one man boy band.

The overall effect is an album that feels both young at heart and weirdly grim. The combination of ominous tracks like both Eternitys, Griffin's reading of First John 1:9, and a haunting, parallel fifth chant overlaying a disturbing spoken word portrayal of post-Apocalyptic Earth courtesy of Revelation 20 in 12 Gates And A River Of Gold plus wacky, fun lovin' photos on the cover that place Griffin in his late 30s or early 40s make you feel a little weird inside, like when your youth group pastor tried just a little too hard to be cool and connect with the kids.

Musically, it sounds as though Griffin knows what he's doing. His interesting, non-standard syllable choices suggest that he's been singing a cappella for some time. As he is the only singer on the album, he manages to blend nicely, with some help from creamy compression and a harmonizer. The arrangements are catchy and fresh, with nice harmonizations and only a few imbalanced chords. Each song has a decent hook of some kind, and Griffin makes sure to get plenty of mileage out of it, often doubling choruses near the end of a song. The studio work is decent, but some of the effects will strike experienced a cappella listeners as cheesy; flange intended to add "mystery" and "awe" (over a spoken Bible passage), overdrive/distortion to attempt blistering guitar solos (which are generally not good), Cher-intonating for added Euro-appeal. The bass lines are good, octavated and warmly eq'ed. The percussion is passable. Some sounds are mouthy, particularly longer sounds like cymbals and extended snares. Griffin could work to tighten his cutoffs and rhythms; both felt occasionally sloppy.

So. If you love pop and the Father, TR Griffin could be your co-pilot. The rest of us should stick with dog, footed Darwin fishes, and Dookie.

*Unfortunately, I can't take credit for this brilliant pun on the new Pope's name. I have to credit Mo Rocca on NPR's "Wait, Wait, Don't Tell Me".

If you can quote the Bible, enjoy Christian pop/rock music AND love a cappella, then TR Griffin's Eternity is for you. If you don't fit all three of these categories, however, I suggest you move on.

Here's the deal: The sound production on Eternity is outstanding; perhaps it is even flawless. The rhythm section — vocal percussion and bass — is phenomenal. Unfortunately, these are the best aspects of the album.

Griffin is a good singer, but his voice isn't very smooth. Something about the tone of his voice is even irritating. He has that New Kids On The Block kind of sound, as do many of his sounds and rhythms.

The tunes are catchy, but the songwriting is trite and basic. Griffin does not do anything new or original, and quotes the Bible for approximately half of his lyrics.

The terrific sound production is also a drawback for Eternity. Griffin overuses computerized sound effects that don't fit into this style of music or these songs. Worse, because so much of the sound relies on the studio work, many of the songs end up very similar. It is hard to distinguish the differences between the songs. It becomes boring and overdone; it's just too much of the same.

Eternity could do without the tracks that recite in spoken word verses from the Bible. The way Griffin delivers the words, with the background music, is too over-the-top and dramatic, and borders on being comical. If he wanted to include these messages, he could have done it with more power and simplicity.

When it comes down to it, technically Eternity is very good. There is just something about it that rubs me the wrong way, and I promise you it has nothing to do with the religious nature of the music. I commend Griffin for spreading the message of something he strongly believes in, and if it brings new fans to a cappella, then I am all for it. I'm just not sure if this is the album that does it.

To order this album visit TR Griffin's website or email him at info@trgriffin.com.