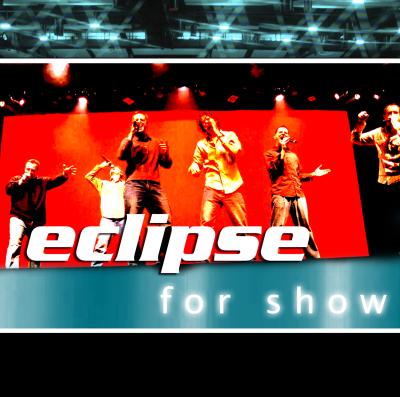 The last Eclipse album I reviewed, Think Twice, marked the group as one of the best out there, worth keeping a close eye on. Eclipse's new live album, For Show, proves that the group is the real deal, just as tight and talented live as in the comfort of the studio. Unfortunately, it does little else.

Most of the songs appear on the group's first two albums. I haven't heard Once, but in the case of the songs from Think Twice, the live versions are spotlessly performed but actually a little less energetic than their studio counterparts. Owner of a Lonely Heart especially suffers from the lack of overdubs and effects, though the listener's appreciation for high tenor Paul Hansen's freakishly good lip buzz bass is enhanced here. I'm largely splitting hairs, but in general I found the studio versions slightly more enjoyable to listen to.

Highlights on this disc include My Maria, with writer Peter Breinholt contributing a beautifully emotive guest lead vocal, and two stunning ballads, Danny Boy and Michael Jackson's She's Out of My Life, the latter of which serves as a painful reminder of just how brilliant an artist Jackson used to be.

I don't particularly care for Zoot Suit Riot. It's stuffed with bizarre, incongruous quotes from other songs, and Kevin Jones' percussion solo shifts tempo so often as to be incoherent. For one of the disc's bonus tracks, former second tenor and current sound guy/songwriter/arranger Patrick Rose (the new second tenor is the excellent Brandon Ellison) remixed Think Twice's Live It On Up with instruments in what appears to be a stab at a lite-techno style. The arrangement is fine, but the tempo needs to be about 15 bpm faster if I'm to be expected to get up and dance. Also, some of the covers on For Show are too overdone for a group of this caliber; what are they doing singing McDonald's Girl and If I Ever Fall in Love?

Make no mistake: this is a very, very good live album from a very, very good group. But it offers nothing new or interesting to those already familiar with Eclipse's previous efforts. I'd pass on this one and wait for the next studio offering.

Fans of Rockapella, the Coats and outrageously earth-shaking lip-buzz bass (popularized in the late '90s in part by former m-pact VP, Mathew Selby) are sure to enjoy Eclipse's high energy live release, For Show. This CD sets middle America pop sensibilities in its sights and hits the bullseye dead on.

High point: The eighties classic Owner of a Lonely Heart stands out as the best of the tracks for its transformative arrangement, jaw-droppingly incredible lip buzzing and infectious Latin-influenced feel. This track takes the talents of the group and applies them to a song of lyrical and musical interest and then takes that song to an exciting and different place through the arrangement.

Low point: What's up with covering McDonald's Girl? A Blenders original, covered by Utah-based student sextet InsideOut and now by Utah-based pro sextet Eclipse? This song is so campy, and taste aside, so strongly linked with the Blenders. Covering an "a cappella original" just reads like an amateur play for a group with this strong a showing. Yeah, everyone does covers. But this is more like one magician doing another's tricks. No matter how well sung, it's lame.

To be nit-picky, tempos and groove get away from the group every so often, though this is a rare problem. But overall, my biggest criticism is that Eclipse sings shallow songs. With the exception of a few tracks, unapologetically cliché'd rhymes express the tired emotions of cardboard characters in obvious scenarios. On the other hand, you won't mind if you've recently said something like, "Oh my god I love that song, it has such a cool beat!" or even better, "That guy in Eclipse just looked right AT ME!"

Eclipse ranks among the very best groups in a cappella today. You won't need to be star-struck to find For Show entertaining, energetic and very, very well sung. You'll rarely be surprised at where the music takes you, but you'll never be disappointed at how Eclipse gets you there.

Fans of the show "South Park" may remember the episode titled "Something You Can Do With Your Finger", in which the lovably crass Eric Cartman endeavors to create a boy band, so that he might earn ten million dollars. In it, Cartman asks his friend, Chef, how boy bands achieve the level of success that he himself so earnestly desires. Chef responds: "All they do is make videos, showing tons and tons of girls screaming for the boy band. Once you get girls screaming, you can't stop 'em. They're crazy!" When I heard this exchange on a recent rerun, I couldn't help but think of Eclipse's newest album For Show.

I don't mean to say that I consider Eclipse a boy band per se, or that the level of their musicianship is on par with a bunch of cartoon cutouts. It's just that For Show, a live album that seems to feature a frenzied mob of fan-girls as an unlisted member of the group, sounds more like marketing than music. Songs like Live It On Up, Kick Back, Relax, and Keep Pushin' On are rife with lyrics encouraging the listener to feel a certain way, or react to the song in a specific manner, that generally fall neatly into the happily upbeat and optimistic paradigms promoted by theme parks. Some listeners may enjoy the bubblegumminess of such tracks, but I started to feel as if I were being brainwashed. Even the parody songs McDonald's Girl and Coca-Cola Losers seem more like advertisements than jokes, as if Eclipse is saying "the only way you can possibly love this album even more is by enjoying a refreshing soft drink while listening!"

I really don't mean to sound embittered or cynical, but For Show is bound to be a difficult listen for anyone who isn't eager to tap into the groupthink of the overzealous pop audience. This is really a shame, because the group demonstrates quite handily that they are capable of good vocalizing. Danny Boy is re-voiced quite deftly, the arrangement catering to Eclipse's pop sensibilities without degrading this revered and solemn classic. Boom! Shake the Room has moments of goofiness, but features some great group percussing. Eclipse's energy throughout the album is excellent (no small feat when they seem to be running at fever pitch much of the time), so it's easy to see how they captivate their particular audience: even when the music turns saccharine, Eclipse never lets on that they are anything but enthused to be doing what they do.

I have to wonder whether I would feel differently about For Show were it not a live recording. It was doubly frustrating to listen to music I'm not so keen on, only to hear an audience full of satisfied fans whose reaction was the complete opposite of mine — in a way, it reinforced my distaste for the album. That said, from the sound of it, Eclipse already has a substantial audience that I'm sure will be pleased with their latest offering, so please excuse me from not screaming along with them.

The album is available from A-Cappella.com and Primarily A Cappella.