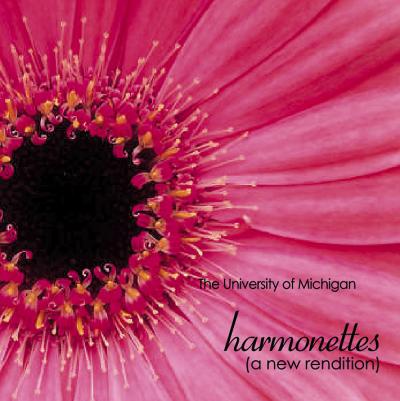 The Harmonettes know something that few other collegiate groups know: who should sing the solos. With few exceptions, every soloist on A New Rendition is well-matched to the challenges of her respective leads. Standouts include Christina Macholan, Racheal Arnsdorf and Heather Guth, all of whom ably deliver a creamy smooth vocal line as well as enough power to bring the energy up more than a few volts.

That said, this album is sufficiently flawed to relegate it to yearbook status. Intonation is a serious and persistent problem, bringing down many, if not all track scores. The arrangements are often empty harmonically and in terms of overall sonic impact. Whether a group member, or the legendary Kirby Shaw or noteworthy a cappella mainstays Aron and Anne Raugh penned the arrangement, it seemed to range from predictable to unexceptional to clever but unsatisfying. On this album, it is the strength and believability of the leads' warm performances that helps the listener become connected with this music.

With the possible exceptions of C'mon and Like a Prayer, the vocal percussion ranged from absent to a kind of novelty. This, I blame in part on the producer/engineer who seemed to leave things in a far too natural state for my tastes. However, those who prefer a clean, unaffected sound will enjoy the production as very little is added.

The Harmonette's blend is usually quite good in terms of tone match, especially in the sopranos, who maintain a noteworthy egoless blend throughout. The ensemble's warm blend leads the listener to believe that this is a group that developed a tight bond from working together and listening to each other. That too draws the listener in on some level.

In the end, the Harmonettes remain likeable and inviting even through their flaws, but some listeners may have a hard time seeing these diamonds shine in the "rough" of the album's weaknesses.

The Harmonettes from University of Michigan included an endearing, friendly note with their CD, expressing how excited they were to put out their first album and how much they were looking forward to getting the feedback. Usually not a good disclaimer, but I crossed my fingers as I pushed the play button.

Sigh. This is going to hurt me as much as it does you, Harmonettes.

A New Rendition is an album that makes just about every mistake in the book of "My first a cappella album". Tuning issues assault the listener on every track, and there's probably not a single harmony on this album that doesn't have a tuning problem during some repetition of it. Many of the songs are rife with rhythmic inconsistencies, from sloppy unisons to abrupt tempo swings. And the tracklist reads like a 'most covered' list from the last two decades of collegiate a cappella.

Let me start there. The Harmonettes don't do themselves any favors by covering so many staples of the genre, especially those from the female canon. Doing songs like Galileo, The Shoop Shoop Song, Both Hands, Like a Prayer, and And So It Goes will inevitably invite comparison with the many who have sung before you. So why do that to yourself? I have no quibble with doing a 'classic' here and there — certain songs get done over and over because they tend to sound good a cappella — but they shouldn't form the majority of your tracklist. Pick some gems that really get you excited to put your stamp on them, and then try arranging them with some other syllables besides "doo" and "ah".

On the technical aspects, there's not much to be said. These songs are out of tune. These songs are arrhythmic and tend to drag. Go. Practice. Nail the basics and when you get back in the studio, use the technical tricks of the trade that are now for better or for worse pervasive in collegiate albums. Even with studio magic this would have been a poor album, but such an unadorned approach works only with the most stellar of voices and music. And that's sadly not what we're working with here.

A short, sloppy sleeper album, A New Rendition falls well below the average mark for collegiate a cappella and offers little more than a weak lullaby.

I was incredibly excited to review my first (mighty!) University of Michigan a cappella album. What a disappointment. Built on soft unisons, lots of wavering three-part harmonies and mostly absent percussion, the Harmonettes' album could pass for a high school glee club product. The inclusion of standard glee club numbers (Lucy in the Sky, The Shoop Shoop Song, And So It Goes) arranged in choral form only solidifies the high school sound. Everything just sounds so... empty. Empty and out of tune, no less.

Empty, out of tune, and brimming with rhythm problems. Trouble was almost unrecognizable Coldplay. Galileo was briefly enjoyable, but only because even a bad Indigo Girls cover will always be at least briefly enjoyable. The Shoop Shoop Song was completely bizarre, largely because the women are singing in a key that is far lower and more minor than the actual upbeat "Shoop Shoop" key. In fact, it may be an exclusive Harmonettes key altogether. Hearing dynamics for the first time on Both Hands startled me. The solo line for 3x5 falls well out of the range of the Harmonettes soloist, and Sweet Dreams is nearly laughable, except for the wonderfully sweet final line. Not surprisingly, Turn Me On fails miserably to do just this, and Like a Prayer was just short of awful.

Their stronger rendition of C'mon was charmingly curious, however. The dynamic reaches a full mf and the percussion is passable! Could this be a preview of what's in store for the Harmonettes?

Finally, I'm not sure why the Harmonettes recorded this album in a studio since the production (except a whole lot of reverb) is almost null. It's nice to hear voices through expensive mics, but that's about all that's nice to hear on A New Rendition.