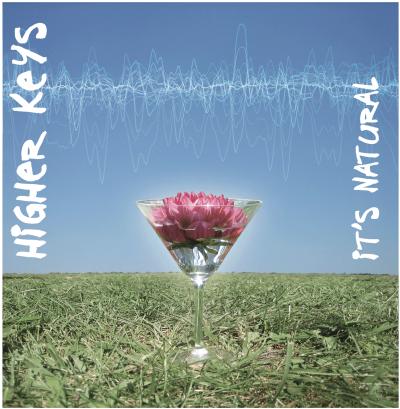 I understand why Brown University's Higher Keys (though you wouldn't know they were from Brown since there isn't a smidge of contact information in the liner notes) named their latest album It's Natural. The recording is unaffected, a bit bare, not artificially treated and a host of other descriptors that my handy thesaurus decided to throw out at me. And like products that tout their naturalness, the album loses some of its enjoyment without the additives that would preserve and present its freshness in more appealing ways.

It's reminiscent of recordings from bygone days when just being in a studio was an "aw shucks" experience. The group has a nice sound and released a decent album even without all of the wizardry of today's producers. But without that jazzy glitz crap so popular in current recordings ... the natural talent of the Higher Keys just isn't all that interesting.

Inexplicably, tuning is a problem on random passages in songs or whole tracks, but on the next tune everything is fine. The arrangements come off as a bit square and static. Dynamic attention and tension comes and goes depending on the change of the weather, I guess. And as is often the case in co-ed groups, the women sing rings around the guys.

No one wants to hear another version of You Can Call Me Al unless it's being re-imaged as a speed metal dirge or something that breathes new life into the song. Here, it's an anemic opener for an album that contains a couple of gems. My favorite is the closing track Leather. The arrangement by Priscilla Sung is just strong enough to showcase Carole Ann Penney's vocal prowess. Sung and Penney exposed nuances in the Tori Amos song that grips at the heart and mind. Naked, bare and completely natural.

On the other hand, some arrangements do nothing but expose the problems that the group has. God Bless The Child features a jazzy breakdown in the middle that confuses more than it complements the character of the song. Crawling in the Dark makes me long for a masterclass with Off the Beat.

The drumming on Don't You Want Me is erratic and overextended, so although someone proclaims that It's Natural, it's also not consistently good.

Waltz for Debby is by far the best track on this album. By working on some music fundamentals, and having Penney sing most of the leads, the group could hopefully turn out all future tracks just like it.

"Why am I short of attention now?" You Can Call Me Al provides apt lyrics to describe my feelings toward the Higher Keys' newest release, It's Natural. This album was blah, so average, I found it difficult to resist my fast-forward button. "Don't wanna end up a cartoon in a cartoon graveyard". Yeah, well, the musical caricatures in the first song alone make me want to lay the disc down to sleep for good. While present in the first track, flat tuning, over-enunciated lyrics, and plain arrangements pervade throughout.

The soloists have a particularly difficult time achieving signature slides and vocal turns in many of the songs, and often add them in at strange places. They do have their small "shot at redemption", however, in tiny bits and pieces. With just a little more control, Charlotte Wilson (Over the Rainbow) would be stellar. I was surprised to hear the solo in that song divided between two people, especially when the first is a soprano and the second a low alto. Women are certainly the better of the sexes when it comes to solos (kudos also to Joy Lee on Angel of Mine and Erica Dieselman on Waltz for Debby), although there are no real winners by any means. I was thoroughly unamused by the leads on Plush and Don't You Want Me. (To answer that question: definitely not with that soloist.)

"There were incidents and accidents, there were hints and allegations" of potential for growth. Angel of Mine offers a nice respite from the nearly campy tracks that precede it. Over the Rainbow and Waltz for Debby are perhaps the best executed songs on the album. They also happen to be the two that were pre-arranged ("OTR" is the familiar Matsuoka Vox One piece, and "Waltz" is by the Real Group's Peder Karlsson.) Na Na Hey Hey (Kiss Him Goodbye) also hints at greatness with a strong all-member "na na na na" ending that only shows signs of weakness when (you guessed it) the men start constructing the chord, and they sing without the women.

The recording style used on It's Natural is perfect for those slow vocal jazz pieces and certainly not for the other tracks. If you're not gonna engineer the hell out of Plush and Crawling in the Dark, you're not going to be very impressive. The minimalistic approach to this Hoobastank song just doesn't work, although I do like the background work on Desperado until it gets flat when the percussion kicks in. Perhaps my biggest qualm is burying Priscilla Sung on Tori Amos's Leather all the way at the back of the album. She's fantastic, and when the Keys aren't overpowering her with chords other than "dum", this is one heck of a number.

"There are angels in the architecture", kids. There are a lot of strong building blocks from which a more solid, better sounding album can be made. "Who'll be my role model?" Look to the Harvard Kroks, maybe the Yale Whiffs. The Higher Keys remind me a lot of my old college group. We, too, did not make stellar albums, and the jazzy pieces tended to sound better on record than the upbeat, more modern tunes. My recommendation is to study other, outside arrangements and older music and apply what you learn to your own work. In no time, you'll be "surrounded by the sound" that you (and RARB reviewers) have been looking for.

(And while it has nothing to do with the review, I want to give my props to Jeremy Jih for having the highest Scrabble score — 18 — in his first name out of anyone in the group. Mine is only worth 10.)

It's Natural could have been a noteworthy sampling of music across genres. As it stands, this potpourri album of contrasting styles and diverse repertoire is rather awkward and unpolished. I hear great potential, but the Higher Keys just took on too darn much.

I do like to give credit for ambition, and It's Natural certainly deserves a nod for giving us such a grand musical tour. There is a song from the '30s, '40s, and '60s, two songs from the '70s and two songs from the '80s, four from the '90s and one modern hit. The styles vary widely, from pop to rock to jazz and classical. I was certainly never bored, but their music just never gelled. If you're going to give us a bit of everything, everything still has to be cohesive through high musicality and solid sound production. It's Natural has neither.

The album starts out with over-covered, average tracks that lead the listener into believing that the Higher Keys are run-of-the-mill. You Can Call Me Al is rather boring and under-tempo, but what I do like is our first taste of my very favorite kind of vocal percussion: totally natural, ultra-clean yet complicated, loud, hard-workin' beats. It's Natural is full of such percussion, and it delights me to no end with each listen. Moving along, Over the Rainbow, while pretty and quaint, is still ... well ... Over the Rainbow. Dorothy was charming in 1939, but she'd like to retire now. The shaky block on Plush slips out of tune and tempo so frequently that the Higher Keys best rename this track "Mush". God Bless The Child was a valiant effort, given the incredibly complex arrangement, but said arrangement is far too advanced for the current Higher Keys members.

In a dramatic turn for the better, the Higher Keys hit Angel of Mine out of the park. It's hard to believe this track is sung by the same singers we've been introduced to. If the Higher Keys make their next album using this track as a standard for sound production and ensemble quality, I'll buy it before they send it to me to review. The greatness of Angel of Mine makes up for floundering Don't You Want Me, which quickly sunk the album back to its original mediocre level. Waltz for Debby was pleasant enough, but one listen is all you need.

I'm still dumbfounded why Friend Like Me from Disney's "Aladdin" is on a collegiate album, unless the stress of college has made the Higher Keys terribly nostalgic. Crawling in the Dark is almost quite good, but lacks the energy and dynamics required to bring it to the "quite good" level. Desperado made me a little irritated. I can hear two low-budget accidents in the background of the intro. Pencils falling off a music stand? Sticks snapping in half? I don't know what that sound is, but all I want to hear is music, please. Finally, Na Na Hey Hey (Kiss Him Goodbye) was rather commonplace, and Leather fell desperately out of tune, leaving a lackluster finale for our tour.

Overall, It's Natural is a strange ride. I never knew what to expect, and the result wasn't eager anticipation, but unsettling worry. I loved the percussion, I disdained a few song choices, and bit my lip over tuning issues. I want to hear razor-sharp intonation, better production, awesome songs from each decade, and a touch of stylistic flair to pay homage to each decade. Grainy '30s? Techno '80s? Ultra-bass '90s? Could be fun...

If you would like to order a copy of this album, please send a $15 check made out to the Higher Keys to: