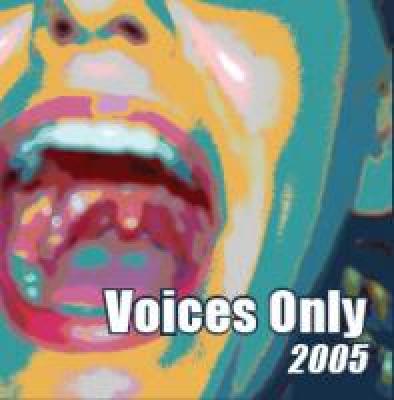 Voices Only is the wrong name for this new compilation, an exhaustive, 30-song sampling of the college scene. It ought to be called "Junkies Only". That should draw in the target audience, without quite facing up to the hard truth. This is not-quite-the-best of college a cappella, a retrospective for the curious that offers very little to anyone else other than recalibration of the average.

All of these songs are decent, ok? Most of them pass their basic competency review, at least within our ghetto. The loud, busy arrangements crash from one song to the next, while the vocal percussion and block chords obscure the group-to-group changes. A few tracks are bad songs interpreted badly, which doesn't do anyone any favors. But the sad fact is, even fewer tracks have any real zing. I was bored until halfway through the second disc, when the Dartmouth Aires stepped out on Ask the Lonely and reminded me that college a cappella can be compelling. Right after that awakening, USC Reverse Osmosis takes on Lighted Up, a really great song. (It makes the a cappella transition pretty well, but if you don't already have Gabriel Mann's Tug of War go straight to CD Baby from here. Much better use of your money than another a cappella compilation.)

As I see it, only a few people should buy this disc: friends, family and collegiate arrangers. There are a number of neat little moments tucked away throughout these 30 songs, awaiting anyone with the patience and attention span to delve. Tunes To Teens is probably a good audience also, since high school students on their way into the acappellaverse will — and should — seek out everything they can get their hands on. But regular people, just looking for a decent listen? They can do a lot better.

You have to understand that this is an album of 30 tracks. It's two hours, four minutes, and eleven seconds of contemporary, collegiate a cappella singing. For me, it's nearly impossible to listen to anything plotless for the length of time in which Hollywood can portray an entire lifetime. Though Voices Only 2005 features good recordings, I found myself tuning out.

Voices Only 2005 suffers from the same lack of theme that left me confused listening to AACI's Sing 2: Eclectic Boogaloo. I imagine that it too was intended as somewhat of a "best of 2005". With CARAs, BOCAs, Harmony Sweeps finals, and other compilations floating around, it's made me wonder what it takes to put together a vocal sampler like this. Is this something just anyone with some cash can do? Though they themselves have already violated a half dozen intellectual property laws, would I even need to ask permission of a group to include them?

If Joe A. Cappella can create a compilation album at will, then what's to stop fans of the voice-only format from a frenzied propagation of sampler albums akin to my sister's '80s mix tapes?

One problem I foresee in this chaotic swirl of fair use commercializing is lack of theme. Having just finished reviewing the 20 tracks of Sing 2, I can report that a cappella, in all its copyright violating glory, is alive, well, and increasingly raising its own standards. With an ever increasing flow of good recordings, it's not enough to simply take good tracks, put them on one (or two) discs, and give it a name. There has to be something tying it all together, especially when "it" is over two hours long.

Though Sing 2 had no explicit musical ties, the album was exciting to me because of the sheer energy of its singing and because nearly every track had at least one exceptional moment that earned a "wow" from me. The producers of Voices Only 2005 have chosen good recordings, but the compilation lacks consistent wow.

Even so, it’s hard not to pick some winners when you have thirty tries. Absolutely spectacular is Boston Aural Fixation’s What It Feels Like for a Girl. The song’s stripped down ambience inspired me to speculate for a quarter hour about the future of vocal music, and I thank John Clark for another brilliant, experimental foray that leaves other tracks feeling Neanderthalic. The artificial bassline of MIT Muses' Feel Good Time is addictive. Radiohead is always cool, and I reveled in the moody misery of Northeastern Downbeats’ Street Spirit. Divisi’s spirited Catch Me if You Can is totally fun. Clemson TIGEROAR’s Never There has some really well-executed highlights. In the Buff’s Collective Soul mashup is still one of my favorite singalong recordings, even a year and a half after I heard it first.

Voices Only 2005 is a good a cappella compilation, and it's worth a listen. I worry, though, that a cappella samplers may become commercialized iPod playlists from any a cappella fan's hard drive. Vocal samplers should be more coherent with tracks carefully chosen to wind tightly around an academic, playful, intriguing, or meaningful theme, say: A Cappella Dance Party, "Okay Computer", Vokal Kombat: Off the Beat vs. Octopodes, Bill Hare's Ultimate Mixing Mix, Catfight: Divisi vs. The Sirens, 10/10: Ten Versions Each of Bring Me To Life and Your Body is a Wonderland. Now that might keep my attention for two hours.

A non-for-profit venture from current RARB/past RARB reviewers Corey Slutsky and Brock Harris, Voices Only offers a diverse and high-quality sampling of contemporary collegiate a cappella.

Distinct from BOCA by including two discs, music from Voices Only includes a good balance of well-known collegiate groups and those who have been lying in the weeds. Disc 1 kicks-off with the completely addictive, party-friendly Stutter by the UNCG Spartones. Cry Me a River comes from the same thread as Stutter, though the UVA Hullabahoos have managed to one-up Justin Timberlake with their energy and drama. The Northeastern Downbeats' Street Spirit is gorgeously haunting, as is the cathedral-esque sound of the Class Notes' Silence, a shining standout on Voices Only. The lovely ladies of Divisi give a playful, sassy performance on Catch Me If You Can, and Collective Soul by Colorado in the Buff is perhaps the most captivating offering on Disc 1.

Disc 2 echoes the diversity of Disc 1, though you'll find stronger soloists here. Wisconsin Redefined opens with a funky and cute rendition of Carwash, and the funky feel continues with Never There by Clemson TIGEROAR. The Upenn Penny Loafer's Missing is beautifully layered, and When I Think About Angels offers the compilation's best soloist (Tanya Marsh) and best production from the powerhouse UVA Sil'hooettes. The Dartmouth Aires lay out it out proper in the emotionally charged, over-the-top Journey classic

The selection process was a rather grassroots, non-official effort. Corey stated: "Brock and I listened to all the songs from all the albums we could get our hands on without submissions. I had access to all the collegiate albums submitted to CARA as I was a nominator. There was no submission process as I was concerned groups wouldn't submit because we were a brand new compilation." I have a feeling there would be great interest in submitting, and hope the producers take a more inclusive approach for 2006. Also, my eyebrows rose when I saw that three tracks from Voices Only came from USC, the producers' alma mater. I won't comment extensively on this, being from a USC a cappella group represented on Voices Only, but listeners could find this decision bias.

Overall, Voices Only is a solid addition to your collection. I was excited to hear from groups previously unknown to me, and the wide styles covered offers something for everyone.