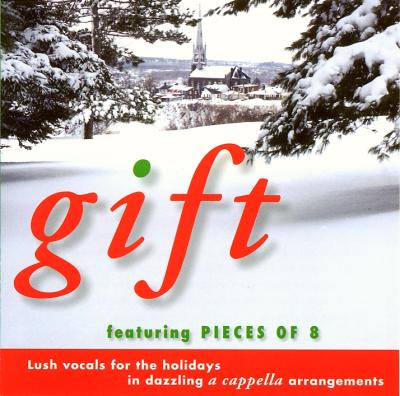 Jazz octet Pieces of 8's new holiday recording Gift goes to show you that even pro groups have a problem capturing the electricity of their live performances on a mass-produced recording. I've seen the group live several times now and they put on a fantastic show, captivating audience members with their sweet harmonies, subtle arrangements, soaring vocals and beguiling personalities. On this latest release, most of their positive attributes are muted to the point of creating a supremely mind-numbing aural experience.

I mean, unless you are releasing an album of sacred hymns and dirges, holiday music is supposed to be cheerful and uplifting and all jingle-jangle, right? Musical Director Charles Mead has unfortunately arranged a 12-song cycle of mid-tempo melodies that have stripped the songs of their originality and verve. He tries to make up for it by creatively weaving several carols together in mega-arrangements, which almost become new songs.

But truly, unless you are paying rapt attention for the full 44 minutes, you miss this bit of ingenuity. It is such a shame because the singers in Pieces of 8 have some of the best voices in the business and Mead's arrangements generally capitalize on the vocal talent in his possession much better than he does here.

An exception isSanta Claus — it starts out at what, in context, could be called a brisk pace with a sparse vocal line by the guys singing I Saw Mommy Kissing Santa Claus which then explodes in a glorious chorus of Santa Claus is Coming to Town. And if the rest of the album weren't so slow and plodding, the contrast and juxtaposition between Santa Claus and What Are You Doing the Rest of Your Life? would be brilliant. The latter's sexily sophisticated tempo underscores the longing and desire that the end-of-the-year desperate flirtation calls to mind. Also, their island-inspired take on the Twelve Days of Christmas breathes some new life into the standard. You almost believe that they can actually "sang".

The RARB reviews are starting to repeat themselves in terms of comments and changes needed with the group. They seem to be stuck in a '90s paradigm of vapidly square swingin' jazz when they record. That means they come off sounding more like Beachfront Property and less like Manhattan Transfer, The Real Group or New York Voices. ‘Tis a Gift to be simple but not if you are going to call yourself a jazz group.

It's tough to enjoy a Christmas album at the end of February. It's even harder to like one that sounds like a high school a cappella group with just a little bit more grip on the notes. But the "tick tock tick tock" that features in the first track really just reminds me of how long and drawn out the album really is. Pieces of 8's Gift is more like a third-string stocking stuffer instead of the great big, beautifully wrapped present under the tree.

Gift comes with none of the oomph that is expected from a group that's been around for so long. Blend is a severe issue, along with contrived arrangements that offend the ear. For example, Silver Bells is not the holiday concert, mall-in-October issue "It's Christmas time in the city" tune, but a jazz-ish, bizarre mix of Carol of the Bells, Do You Hear What I Hear?, and finally Silver Bells. The whole thing seems so amateurish, not to mention the oddly-placed baritone quickly adding in "Christmas is here" in between breaths. This song alone is a mix of major and minor keys, dissonance that's too off-putting to be interesting any longer. It's just weird, not to mention slightly creepy. Much of this, sadly, is applicable to the entire album.

The fact is, this album is both Falling Together and Across the Blue Meridian, but with mistletoe. There's not much to add to this review that hasn't already been covered in my previous two encounters with Pieces of 8's albums. Simply put, sometimes you just want your Christmas songs straight up. Charles Mead's creative license with the arrangements make it feel more like winter on acid.

In my last review for Pieces of 8, I wrote the following: "Most vocal jazz groups have a distinct sound, a distinct identity. The striking arrangements contributed by artistic director Charles Mead give Pieces of 8 a chance at this but, with weak production and no trademark sound, Pieces of 8 is anonymous."

Former RARB reviewer Adam Ballard had this to say about independent bass Clayton Cromley on the same review: "...[he] sounds like a fish out of water, flopping sadly about as he tries to keep up with the over-the-top showboating going on in some of the upper voices."

I don't think either of us are to blame, because it can be hard to focus on parts of a whole ... but the distinct sound and distinct identity of Pieces of 8 comes from this very fish and these very showboats. And let me tell you, this fish and these showboats are working overtime in Gift to bring the listener quite a present indeed.

Let me give you a little back-story about my recent Piece of 8 epiphany. The group kindly sent me free tickets to their Wisconsin holiday concert. Many of the tunes from Gift were on the bill, and all were enthusiastically received by the audience. In fact, there was so much whooping, giddy chatter, and overall ruckus that I put down my program and thought, "Now what the heck is going on here? This isn't a rock concert!"

So I watched Pieces of 8; I watched them quite closely, as my seat was quite good. And that's when I realized that Clayton, our fish-bass, was a one-man show. His exposed, odd bass lines from Pieces of 8 albums didn't sound jarring live; they sounded creative and whimsical, and his efforts to ham them up only aided their uniqueness. He was not flopping around — he was boldly soaring out of the water and splashing down like a whale! And those upper voices that seemed too forceful on the last album? They were a hit live, as the audience was treated to precise vocal gymnastics with flips reaching the upper atmosphere of sound. So what's going on? Is Pieces of 8 just a group you've gotta see to appreciate?

Well, the audience really appreciated the new spin on old Christmas favorites, and so did I when I listened to Gift. Though I would have changed the line-up of the album (always start with an up-tempo piece, right guys?), I'm rather pleased with the selection. I delighted in the playfulness of Silver Bells, which features lovely moments of Clayton proudly bouncing along. Sleigh Ride was a wonderful dance-like rendition, which showcased the strengths of each Piece and came with authentic horse-clomping sounds (though a bit too much cracking-of-the-whip for my taste). The elegance and warmth of Count Your Blessings / White Christmas was serene, and moments of dense, rich vocals were perfectly placed in the arrangement.

Twelve Days of Christmas sounded, compellingly enough, like island music. And who would have thought God Rest Ye, Merry Gentlemen could be intertwined with My Favorite Things? (Charles Mead, apparently.) But Prayer for our Children is the star of Gift. An effective drone, sensitive solos, and powerful lyrics makes this song completely engaging. Santa Claus is a wild and surprising version that you'll want to listen to again immediately after it ends, and What Are You Doing the Rest of Your Life? is a tender and appropriate closer for Gift. And through it all, we hear a funny, endearing bass and women who gracefully soar above the staff to add excitement and awe. These elements make Pieces of 8 truly distinct. Apparently, it takes some of us longer to appreciate the little things...

The production on Across the Blue Meridian left much to be desired. The production on Gift could have also been upped to bring-out the best bits and Pieces. I say turn down the reverb, and make better use of studio software. Fortunately, Christmas music never needs a lot of tinkering, so they're off the hook this time. Most will enjoy Gift as a product and won't have to see the Pieces live to understand their talent and charm, because the best part of this album was the absolute exuberance the listener can hear from each Piece. You can hear them smiling, and you can feel their happiness as they sing. It was just wonderful. So next December, buy Gift for the jazz lovers in your life. They'll really like it!