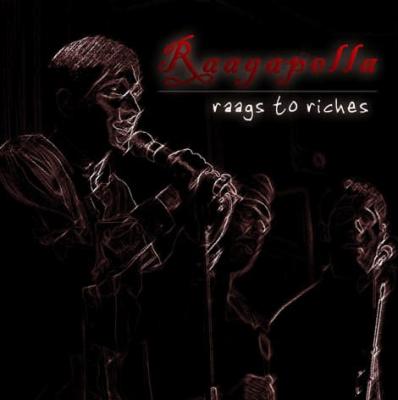 You just know Penn Masala, having had the Hindi collegiate niche all to itself, was pissed when Stanford Raagapella hit the scene. Raagapella is a reasonable challenger, having recently won a South Asian a cappella competition and putting out a debut album Raags to Riches that is relatively clean and competent. Unfortunately, Raagapella fails just as Masala had before them to turn their gem of a genre into a real sparkler.

I know we've been through this before, but let's lay it out again - just because two songs can be combined doesn't mean they should be. The opener Yun Hi Chala has a smooth, lilting energy with nice stylistic details, but then veers into a minute of one of the most boring Dave Matthews covers ever; by the time the two are melded again, they've lost me. Even worse is the haphazard switch between languages in some tracks. For example, the frantic Nachna Tera Naal sounds like a MicroMachines commercial when the verses switch to English, whereas the sleepy Oh! Carol switches languages repeatedly over the same vamped chord progression.

But Motel got a deserved giggle for its un-P.C. rewritten R. Kelly lyrics and strongly accented soloist for comedic effect. And Chak De meshed with This Love fairly well. The genre mix can work, but it requires a little more thought and strategy than is evidenced here. In particular, I'd prefer to hear more fully integrated songs rather than the song A, song B, both combined pattern that has been ubiquitous so far.

Beyond the creative elements, Raagapella is a solidly average group. Their tuning never really derails, but there is some screeching along the tracks at times. Soloists are adequate to a man, but none really called for a repeat listen. And I would have liked the mix to pop a bit more and lend the album a bit more energy. Where is the vitality that is so indicative of Indian music? Bill Hare and album director Mehul Trivedi let the chords of Tu Hai Aashiqui Hai and Vande Mataram shimmer, and it's unsurprising they're the best tracks on the album. Of course, this might also owe quite a bit to the fact that they are also the best songs in a fairly tedious choice of repertoire. Back to that whole thought and strategy thing ...

Blah blah blah — see my last three Masala reviews to hear more of the same. Let's hope the new kids on the block and the veterans push each other to new heights and finally fulfill the promise of this genre.

A debut collegiate album that's slick, fresh, and filled with musical splendor. Sound good? Then buy Stanford Raagapella's Raags to Riches when you finish this review.

Raagapella's music comes to us in Hinidi, Punjabi, and English, and it comes to us in such an innovative, cultural bending and blending way that Raagapella is performing a cappella unlike any I've ever heard. The languages, the colorful voices, the skillful craft, the traditional, ethnic music mixed with modern pop and hip-hop, the top-notch production value, and the wildly ingenious arrangements make for an unforgettable listen. Upbeat and super catchy Yun Hi Chala suddenly transforms into Dave Matthew's Stay. Pleading Oh! Carol drops in the notes to the familiar oldie but goodie Crocodile Rock by Elton John, and lively Chak De spins into Maroon 5's This Love. And just in case you're bored (doubtful), you can rock-out to their incredibly amusing take on Motel by R. Kelly. Because "Girl, you wanna come to the motel. Baby, you don't have to be Gujarati. Feelin' the way you carry your sari, girl, and I wanna get with you 'cuz you'z my jati." There is humor, there is warmth, there is talent, and there is fun. What more do you need?

I feel that this style and sound is what Six13 tried to achieve — but came up short. Here the singers skip from dance beats to lush melodies to rap to culturally authentic offerings with precision and flair. My only complaint is that the vocal percussion at times creeps too far to the artificial side, an odd occurrence for producer Bill Hare. Regardless, Raagapella is now a shining standout in the capable Stanford a cappella community.

Raagapella is a seamless fusion of western and eastern grooves, lyrics, harmonic progressions, melodies and even tuning systems.

Their self-proclaimed mission of sharing their love of music through their diverse backgrounds provides a wealth of resources to draw inspiration from. Lyrics are either taken straight from Hindi, Punjabi and English or are melded between the three. Harmonies are frequently very simple western chords (often I and bVII) but are presented in a drone-like tradition of Indian music that give this entire album a trance-inducing effect. I always felt relaxed and settled after listening to Raags to Riches the whole way through. Background ostinatos and solo riffs draw from raagas to create "super blue notes" using micro tonality.

This would be a good time to point out that this Stanford group didn't just mutilate Rockapella's name to avoid copyright infringement. "Raaga" are the modes or scales used in classical Indian music. They differ from our western scales not only with their use of micro tonality, but also with their designated uses. Some raaga are explicitly used at certain times of the year, day or season or for certain ceremonies or to express certain moods. Imagine only being able to use Dorian in the winter and Lydian at birthday parties. Check out this Wikipedia entry for a more elaborate and detailed explanation or raaga and Indian music.

Anywho, one of the most endearing qualities of this album, besides that it's creative and is performed well, is that it's smothered in a thick coat of joyful pride. Raags to Riches is one of those rare albums that is born of a sincere compulsion to share deeply rooted ideas about music/heritage/life/etc. rather than to "rock so hard they couldn't keep us off BOCA with a stick and group X will finally stop stealing our auditionees!" (For those of you playing the RARB home game, you'll notice that I've said something similar for a few albums before, and they scored well too. Hint, hint, nudge, nudge, dig deeper and make your albums more personal and you'll get more recognition than just being a cover band.)

Whether you are multiculturally starved and need a boost from another section of the world or you are just looking for some creative music "Raags" is worth your riches.