Voices On The Dark Side 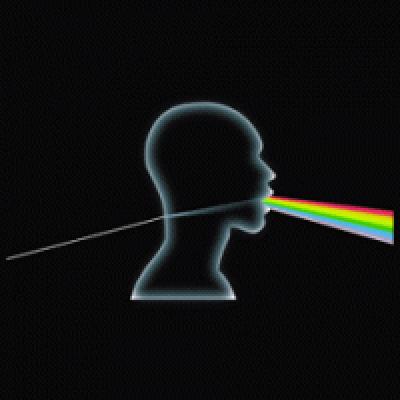 Voices On the Dark Side's cover of Pink Floyd's Dark Side of the Moon presents three challenges and a musing:

I'm not a huge Pink Floyd fan. It's always seemed to me that Floyd was for stoners and that enjoying the trippy, solo-heavy Dark Side of Moon (DSOTM) required supreme patience or an altered state of mind. Its nearly 5 minute average song length doesn't exactly lend itself to the snappy, post-Beatles songwriting to which we a cappella fans are accustomed. Furthermore, as a solo-driven band, Pink Floyd is horizontally oriented, not one to indulge in the vertical layers of rich harmonies that a cappella favors. And DSOTM isn't exactly spirited, around-the-campfire, sing-along stuff. Many less ambitious a cappella groups would laugh at the concept of covering an entire album, much less one this challenging.

As of this paragraph, I haven't yet listened to Voices On the Dark Side's concept cover album, preferring instead to bone up on the original. I've listened to the Pink Floyd album straight through nearly ten times in three days (and several times since then), and to my Floyd-hating wife's dismay, it's growing on me. I really dig the use of "found music", like heartbeats, the cash register and coins of Money, and the clocks of Time. I'm intrigued to hear how Voices On the Dark Side will evoke them. I like the stylized wails of the backing vocals. I eagerly anticipate the lead vocal entrances, and I'm abashed to find myself even singing along.

First, imagine a version of DSOTM that's distinctly jazz-infused instead of gospel, where guitar solos are either scat or distorted voice effects. Singers will recognize the stylized singing and sophisticated feel of a cappella jazz instead of the swirling emotion and rawness of soul and gospel. Voices On the Dark Side's version feels more controlled and less improvised.

Second, Voices On the Dark Side "doesn't scare the shit out of" my aforementioned Floyd-hating wife. DSOTM is paranoid, lonely, and cold. It's edgy, caustic, and bitter. Voices On the Dark Side's version is softer, less raw. It's warmer, filling in the sparse moments. The album is joyful and venturesome instead of cynical and jaded. It's more palatable because it's more human.

Yet A/B listens made it instantly apparent that Pink Floyd is more relaxed and loosey-goosey, while Voices On the Dark Side is taut and painstakingly planned. The Floyd feel is more genuine, with a vibrance that's lost in the translation to voice. An exception is Any Colour You Like, a very enjoyable track with a real funk motion.

Voices On the Dark Side's On The Run was surprisingly trippy. Frenetic bass and VP are functionally identical to the Floyd version. The backing vocals move from vocal warm-up session to whale song to 180 degree, pan-bounced, pitch bent arpeggio to '60s sci-fi effects. It's disconcerting, and it's great. I missed the sense of tornados and B-2s coming over the hill, but this difficult track is a success.

If I had any disappointment, Time and Money would be it. I was intrigued to wonder how Voices On the Dark Side would evoke clocks, chimes, cuckoos, cash registers, ripping receipts, and crashing coins, or at least match the rawness of the original. I was surprised to get vocal warm-up sessions. The interpretations are unquestionably clever and worthwhile, but I was hoping for something revolutionary. Money's hacking and spewing is followed by an extended scat-a-thon. Scat fans will love it, but for me the song grew tiresome. Fortunately, the lead vocals on both tracks are astonishingly accurate in tone and intent and really make up for my minor letdown.

As of this paragraph, I have just finished watching "The Wizard of Oz" with Voices On the Dark Side. I have to report, if Floyd didn't intend DSOTM to be an alternative soundtrack to Oz, there are some amazing coincidences in this world. While nearly 30 awfully well-timed coincidences throughout the movie are convincing, hundreds of other incoherent moments are left wide open. Is Voices On the Dark Side's DSOTMA Oz-compatible? No doubt. In fact, the group adds touches to make the album more Ozzish than the original ("zee ah zee", witch bike theme, the lion chomping stings at 2:00 of On The Run, better emotional pacing of The Great Gig in the Sky). Check the Community Reviews forum for a complete listing of DSOTMA-Oz synchronicities (as well as my unedited 1,200 word review).

A cappella has been a genre traditionally dominated by covers. It is therefore surprising to me that I've yet to hear an album that is an entire cover of another album. This is what Dark Side of the Moon A Cappella has created, faithfully reproducing Pink Floyd's landmark accomplishment The Dark Side of the Moon in its entirety. Liner notes even indicate it's "Wizard of Oz compatible", though I didn't try it out myself so can't vouch for its veracity.

The album is solidly done. Arrangements are representative of the originals, and ample use of effects recreates much of what Dark Side did. A personal favorite of mine was the guitar solo on Time. Arrangements go beyond pure reproduction to use the uniqueness of the human voice to portray what instruments sometimes lack. The opening of Money is a fine example of this.

Tuning is great, but blend-wise I found the women's parts too far forward and generally too strident. Bass Dan Riley deserves recognition for his consistency. Soloists are across the board. Money stands out as one of the better examples; solo work on The Great Gig in the Sky was just plain awful — poorly sung, nasal, all over the place, and not pleasant at all to listen too.

Yet, after dozens of listens I am still unsure of where I stand on this album. At first listen I thought it was amazing, yet I am left less and less impressed with each successive repetition. In the end, I have to ask myself what the point is. Yes, it's certainly cool, it was fun to listen to (especially at first), and I certainly give lots of credit to the crew Freddie Feldman has assembled for what can be considered a landmark accomplishment in its own right. But when one gets over the uniqueness there isn't a whole lot there. Most telling, taken individually I don't think any of the tracks, with the possible exception of Money, would cut much mustard if they weren't part of the entire cover album. But then again, maybe that's the point. In the end, while this album is good I think Pink Floyd's Dark Side is better. While this album may add to the a cappella scene, I don't see it as adding anything to the original, which is why I still question my feelings about it. Either way, it's certainly worth a listen.

First, the moody, psychedelic, spooky feel of the original didn't really make it to the a cappella version. And really, that moody, psychedelic, spooky feel is why Pink Floyd's Dark Side of the Moon has such enduring value. I'm assuming the absence is because the original is heavily instrumental, and it takes a tremendous amount of creativity to be a vocal band trying to capture a specific mood without much ... vocal music. It's possible Dark Side of the Moon was chosen precisely because of the scarcity of vocals — to really show what the a cappella genre is capable of. Regardless, words are few, effects are abundant, but the trippy feeling just isn't as present. Second, the dominance of women got quite taxing. Too much vibrato, too much shrillness, too much brightness for the dark side. And finally, the a cappella version just didn't capture the sonic density of Pink Floyd's work. It's difficult to articulate, so I'll keep it simple: Pink Floyd's work just sounds fuller.

Still, I commend this effort and have recommended it to many. I'm sure it took a huge amount of patience, experimentation, money, and love. And as a result of these factors, a few songs had moments of jaw-dropping excitement. The Great Gig in the Sky has an awesome solo from Stephanie Lewin that's on equal footing with Pink Floyd's soloist. Us and Them is stunningly expressive, and is also on par with the quality of the original. And the beloved spotlight song, Brain Damage, will certainly please Pink Floyd fans to no end. It's cool, it's intense, and it offers something all a cappella fans should hear.

Basically, if you like Pink Floyd, you should enjoy this. I prefer the original, but still enjoyed the a cappella version enough to tell you to buy a copy.

The album can be purchased from DarkSideVoices.com, A-Cappella.com, and CDBaby.com.