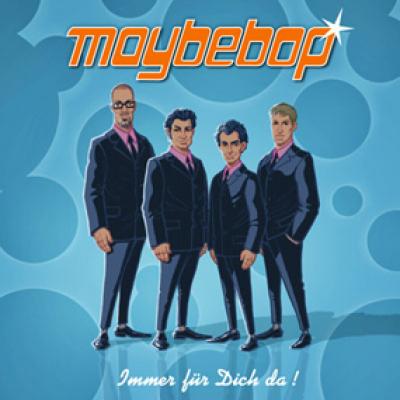 Aside from the two versions of Smells like teen spirit and one Nothing else matters (the two most alternative themed tracks on the CD), Maybebop is singing sweet harmony directly to the Fatherland. Love great production and tight inventive harmonies but don't speak German? That's OK. Lyrics, shmyrics. This stuff is high energy, fun and dead-in-tune. I do sometimes wonder whether my enjoyment would increase or decrease were I to read some translations. But a visit to www.maybebop.de, our heroes' website did not uncover any English. So top-notch nonsense it remains. Is it all sunshine and flowers or pedophilia and killing sprees? Buy it and try it both ways. Or learn German. You could also do it that way.

On Immer fur Dich da! '90s upbeat pop appears to be the dominant flavor: a little rock, a little boyband. But there are some lovely moments of jazz and even classical counterpoint thrown in. The arranging and production work hand-in-hand to create some creative and exciting soundscapes that allow each song to transcend its dominant genre and usually belie this group's status as a quartet.

I didn't care for the strong accents on the English lead in Nothing else matters which seem slightly unintentionally comical, nor did I care for its reverb-y "neer neer" style guitar solo. The live version of Smells like teen spirit has some bumpy sections But this is but a hiccup in an otherwise excellent collection of material. I doubt that any of the leads will completely blow listeners away, yet the ensemble sound will easily pick up the slack. Maybebop's harmonies, production and energy are nothing less than stellar.

This "neuss" just in: Maybebop's Immer fur Dich da! is a must have.

Another year, another cheery album from German pop quartet Maybebop. These guys need to cover Shiny Happy People, as it would be a practically eponymous track. I associate Maybebop with tight, glittering pop harmonies on engaging German tracks and slightly goofy English covers, with a smile-'til-your-cheeks-hurt tone running through upbeat and melancholy songs alike. Immer fur Dich da! cuts the English covers to one relatively credible Nirvana tune and fills out the rest of the repertoire with pure, unadulterated Deutsch a cappella. Playing to your sweet spot is always a smart strategy, and it largely pays off here.

So it's all the more disappointing that Immer fur Dich da! is a really good album which is about six mediocre tracks too long. Some more judicious self-editing could have resulted in a real gem. Instead the listener finds his pace slowing over the course of the album, from an energetic initial sprint to a slow trudge to the finish line. Maybebop does some fun work along the way, particularly the bubbly opener and the space-age closing to Engel. But the solid if undifferentiated latter half of the album is dead weight dragging down the rest of this buoyant music.

Immer fur Dich da! roughly translates as "Always there for you". And indeed, Maybebop comes through with another solid and enjoyable listen — if not a masterpiece.

Maybebop's Immer fur Dich da! is quality a cappella that is enjoyable to listen to once or twice, but unless you understand the German language, it would be hard for me to recommend.

The problem with the album for me, which is to be expected I guess, is that aside from the Smells like teen spirit and Nothing else matters covers, everything is sung and spoken in German. In my review of Weihnacht I wrote that I wished Maybebop would incorporate some English into their liner notes or their web site so fans from other parts of the world could know more about the group. Unfortunately, the group hasn't answered my request, and I know just as little about the group now as I did then.

Still, I was able to enjoy some of what Maybebop has to offer. The guys all have good voices and they have a spectacular blend. Their best skill is their ability to create resonating harmonies, as evident on tracks such as Zartlich Allein and Schlussel Zum Gluck. For once, I'm glad that a group added a live track to an album of studio-recorded songs, because it shows Maybebop's skills. The live version of Smells like teen spirit sounds pretty identical to the studio version, except for some effects and wizardry. My favorite track is the album's opener, Du zweite Wahl, a really great song that has a nicely layered and groovy chorus.

Really, what it comes down to with Immer fur Dich da! is your level of knowledge of the German language. If you can understand the lyrics, then my guess is you'll really love this album. If you can't follow along, then you'll likely be frustrated. I think a crossover album — half the songs in German, half in English — would really expand Maybebop's fan base, and would end up being a really excellent release.

To order the album visit the group's website and enter the "maybeshop".