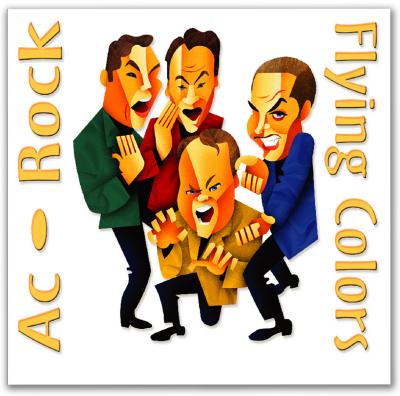 Modern doo-wop doesn't get much better than this. The boys of Ac-Rock are back in top form, knocking out 13 strong songs with great-sounding arrangements and a crowd-pleasing panache. Rampant professionalism is such a great touch.

The songs on Flying Colors competently cover the 1950s through the 1970s up to the 1990s. Each song seems calculated to win fans at a corporate reception, a school or a festival. As in the past, this group seems at home with the '70s and churns out a number of Crosby-Stills-Nash-Young stylings. But on this album, Livin' La Vida Loca and the Kenny Loggins tune I'm Alright have plenty of kick too.

Old school numbers also fit the bill. Flying Colors has two Leiber/Stoller tunes and a convincing Little Darlin'. The genre breadth bodes well for any prospective hirer — you want love songs, we got love songs; you want lively, we got uptunes. Heck, they've even got old Chicago and new Chicago. Does Anybody Really Know What Time It Is? and You're The Inspiration are not the strongest songs on the disc, but neither lets down the side.

My favorite track was Draggin' The Line, a cool cut with an ageless appeal. Thanks to RARB, I own all 5 Ac-Rock recordings, so I can confidently say that Flying Colors stands up to anything they've done and is a decided step up from their previous effort, the wimpy and uninspiring Out Of The Box. Personally, I like this kind of music better live than on disc, but at least the recording shows they've got the goods to deliver.

A cappella groups everywhere can learn a lot from Ac-Rock. The group has stayed together for at least a decade, with a solid bunch of albums to show for it. I bet there are also legions of happy audiences, and I hope there are many more legions to come.

Ac-Rock, an all-male quartet, adds to its already considerable RARB ink with its latest release, Flying Colors. With a bit of a twist on the traditional, Ac-Rock raises the bar for itself in the competitive market its occupies.

A glance at the set list illustrates a tendency toward more traditional songs, such as Draggin' The Line and Little Darlin'. Unfortunately, even for the more updated numbers (Livin' La Vida Loca), Ac-Rock can't manage to update the arrangements. The disc ultimately falters because of its repetitive and uninteresting arrangements. Especially toward the tail end of the album, arrangements seem empty and missing something. You're The Inspiration just doesn't sound right, and despite a strong opening Does Anybody Really Know What Time It Is just doesn't have any of the power or energy of the original.

Thankfully, Ac-Rock manages to bring a bit of modern technology to the album, giving their sound some edge the modern listener has come accustomed to. Tracks such as I Think We're Alone Now and Elenore<;song> illustrate a practiced hand in the studio, and some neat effects are sprinkled throughout the track list. Production is stellar and tuning and blending almost never falter. The bass lines are especially consistent and well performed.

Still, Ac-Rock is at its strongest on traditional tracks. Down on the Corner and Little Darlin' were two of my favorites. The group hits its groove and clearly knows the genre. If it can improve its arrangements a bit, its updated repertoire will better fit its updated sound.

Empty, easy arrangements and a bit too much of the goofball factor make it hard to love Flying Colors.

It's too bad Flying Colors wasn't as good as it should have been. The track selection is a solid feel-good offering, and the guys certainly like to have fun. But they tried a bit too hard to win us over, with plenty of over-the-top impersonations and never-ending comedic schtick, but not enough strength in their arrangements to support such an approach.

Ricky Martin they're not, but their borderline parody style translated well on most of their oldies. Mark's spot-on recitation of Little Darlin' is pretty incredible, though his awkward exposed bass line would have been better doubled or digitally coated (his exposed bass line on Draggin' The Line sounds much nicer). Elenore and I'm Alright were stronger tracks, James Dean, I Think We're Alone Now, and You're The Inspiration not so much. I must say, I was rather surprised to hear a sleeper version of You're The Inspiration coming from four guys who match their socks to their bright blazers and engage in some sort of kung fu on their liner notes.

A bit of advice for the well-intentioned guys of Ac-Rock: use I'm Alright as your sound baseline. If you record a track and it doesn't sound at least as full and interesting as this one, you have more work to do.