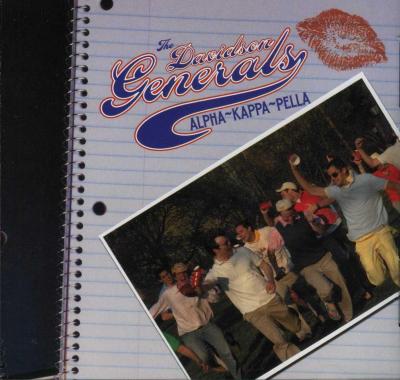 Hang on to your hats, folks, but there is yet another a group pitching a tent in the rich a cappella terrain that is North Carolina — and quite a nice tent it is, too.

The group is the Davidson Generals and the album is Alpha Kappa Pella, which I believe is their third release. This is an impressive effort from a group that is not even a decade old.

Thirteen members strong, the all-male ensemble admittedly starts off a bit slow, with Lana Sims' too-literal and too-simplistic take on John Stephens' Used 2 Love U (though I'll admit it delighted me no end to see a collegiate a cappella group covering a song by a former collegiate a cappella musical director). The guys take a step forward with Gavin DeGraw's Chariot featuring a lovely solo by Lewis Beard and an arrangement by Russell Howard that, while still a touch too simple for my tastes, finds a way to use long, sustained chords effectively to evoke the right feel without being boring.

But Alpha Kappa Pella really hits its stride with the Generals' cover of Maroon 5's This Love with a fantastic energy created by Howard's rock solid arrangement and solo. From then on, the album is a consistent and nicely ordered smorgasbord of enjoyable music, capably rendered and tastefully produced by James Gammon who has quickly established himself as the go-to guy for collegiate groups in the mid-Atlantic states. It's not all stellar work, but it's safe to say that there are no real clunkers to be found, and there are quite a few gems as well. The gents do a wonderful job with The Promise in an arrangement borrowed from the Duke Pitchforks, and Dave Peet turns in a CARA-nomination worthy performance on At Last — I'll admit that when the song started, I couldn't quite believe an all-male group was going to tackle this song given the iconic nature of the Etta James version, but when they were done, I was quite glad they did.

The liner notes don't delineate a Musical Director and, indeed, the album features contributions from at least seven different members of the group as arrangers. The results are a bit of a hodge-podge, with Russell Howard's two aforementioned tracks probably the strongest offerings from within the group. Lana Sims' four tracks are a bit less consistent, with with The Call falling flattest sans a solid kick drum sound and an arrangement that sits heavily on the song's tarantella-like rhythm to the point of monotony. Sims' Mayberry on the other hand still has a mostly unison rhythm in the background, but the energy and in the background block makes it fun nevertheless. Other tracks like In The House of Stone and Light are pleasant if uninspiring, and Down By the Riverside pretty much delivers what you'd expect. The Streets of Philadelphia, also borrowed from the Pitchforks repertoire, is soothing, but its somewhat artificial ethereal quality is noticeable and the solo is a bit too trained and formal when it should be tired and weary.

Solos are uniformly good, though rarely superb. Dave Peet and Lewis Beard, as noted above, and Will Perreault on The Promise are the standouts, with Drew Patterson deserving of honorable mention for Fill Me In. VP is heavily processed in most places, extremely noticeable (and ineffective) when not, and oddly, mixed a bit too far back in the mix now and again — and it's not credited anywhere on the album, which only reinforces its almost "inhuman" feel.

Some slightly more developed, layered arrangements, a bit more realistic use of VP, and a little more attention to "feel" in matching soloists with material are really my only bits of advice to the Generals for improvement. Otherwise, they should just keep up the good work and I'll just look forward to enjoying it.

The cover of Alpha Kappa Pella features the Generals tearing across a lawn clutching the classic red plastic cups that adorn every college party. While I enjoyed this album, it was short of the party I expected.

You'll quickly notice that the Generals have great blending and a great bass section. This sound helps to combat the soloist thorn of Alpha Kappa Pella. Many of the solos had shaky tuning, safe deliveries, and weak vocal technique. This shortcoming garnered Alpha Kappa Pella a "3", so I hope more time is spent improving the solo work for the next go-around. It's interesting that the soloists don't measure up, considering the group sounds pretty darn good.

The digital treatment given to the percussion on Alpha Kappa Pella isn't always favorable, either. The percussion/vocals divide is deep on tracks like Used 2 Love U where the super synthetic beat doesn't support the natural vocals and simple arrangement. But it's soul R&B - it should have some slick beats, right? Still, these drums don't match the style of the vocals and so they don't complement them. The strength of the original Used 2 Love U is just not conveyed here. Yet the divide is closed on tracks like Please Forgive Me, a piece where digital drumming creates an awesome atmosphere and supports the vocals. Really, their percussion is hit and miss.

But Alpha Kappa Pella certainly had its moments of greatness. Tracy Chapman's The Promise is the standout on this album, a beautiful song and a beautiful arrangement that manages to be gracefully understated yet still driven. The liner notes tell us that this arrangement is courtesy of the Duke University Pitchforks, who contributed another great arrangement on this album, The Streets of Philadelphia. I'm not sure if it's my player's fault or an unfortunate CD booboo, but the end of The Streets of Philadelphia gets cut short. All the same, I'm glad groups feel generous enough to share, because these works are wonderful and should be passed around.

The Generals certainly have some areas to improve on, but I love their spirit and wide array of covers. Be sure to give Alpha Kappa Pella a listen.

Most male collegiate groups tend to be singing groups with fraternal tendencies but the Davidson Generals seem to be a fraternity with some singing tendencies. Among an atmosphere of popped pastel collars, beer funnels, red plastic cups, a stein glass, and what I'm going to euphemistically call an "initiation paddle", all on an album with a pseudo-Greek title, the music feels like a haphazard yearbook soundtrack.

The first thing that popped out at me was the discrepancy between the drumming and the singing. While the tone and intensity is pretty much uniform in the singing regardless of the style, the drums are unique from track to track and run the gamut from raw and human in the intro to This Loveand At Last to a hyper produced, nearly electronica feel in Please Forgive Me. Such an inconsistent rhythm section would usually grate on me, but in the face of tonal monotony it was refreshing and usually the only way for me to distinguish between tracks for the first few listen throughs.

Another thing that caught my attention after a few times through the album was that The Promise seems to be the only song with all thirteen people singing. It sounds full with rich tone that is appropriate for the song, and I found myself coming back to this track quite often. Almost everything else could be done by a talented quintet, which left me disappointed that more of the album wasn't more like The Promise.

Some questions: What's up with the last phrase of The Streets of Philadelphia? It stutters and skips to the next track awkwardly, and I'm sure it's not a scratched disc because the counter matches the transition exactly. What's with the lonesome "yeah" at the end of Rain King? The song had ended so well and out of the ether comes this shout that sounds like the soloist forgot the song was over. Also, why couldn't the last 46 seconds of Please Forgive Me be used earlier in the song? It built so well all the way to an incongruous "bounce" that I wished it had been put somewhere with lyrics to help keep the song moving.

Alpha Kappa Pella provides a generally decent listen with a few gems shining through. I bet the group has a lot of fun, but the Generals need to be more consistently engaging with less stagnant consistency to rise to the next level.