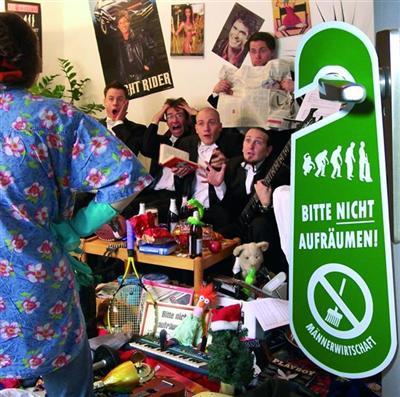 Rarely have I been so pleased to have absolutely no idea what is going on. Those who hear Bitte Nicht Aufraeumen! need not know that Maennerwirtschaft is a modern day version of Germany's Comedian Harmonists to enjoy the album. With this spirited half hour album moving along at the lively pace of three minutes per song or less, listeners will be too busy bopping their heads to scratch them.

Maennerwirtschaft is known in Germany for a "special mix of songs" that is inspired by the longstanding European musical tradition of "the most famous vocal group in Europe ever", the Comedian Harmonists. I'd never heard of them, either, and so I listened to this album several times, as thoroughly entertained as befuddled, before doing some research. The Comedian Harmonists were a European musical sensation of the 1920s known for close harmony, using the voice to mimic instruments, and singing anything from classical ensemble pieces to contemporary popular music to spoofs. Sound familiar now? Yeah, they were—in spirit—an early all male collegiate a cappella group.

Maennerwirtschaft carries on in this proud tradition, singing a mix of old timey parlor favorites in the style of the Comedian Harmonists, medleys of early rock ‘n roll and R&B, and spoofs of David Hasselhoff, who is huge in Germany. Many a cappella groups that attempt send ups like these fail embarassingly, yet Maennerwirtschaft succeeds, singing with an infectious energy, impeccable precision, and understated irreverence that left me chuckling and bemused that I was entertained even through the language barrier.

The album's Comedian Harmonists's songs will strike the listener immediately. First, a rollicking piano accompanies each song, punctuating gaps in the singing, just as the Comedian Harmonists performed them. Surprisingly, the accompaniment is not a distraction. Instead, it is so well integrated into the fabric of each song that it helps to set the musical style for the vocal lines, freeing them from the drudge work of composition and allowing for greater expression. Second, Maennerwirtschaft sings with manly gusto, in full male chest voice with burly vibrato, achieving a sameness of tone and style without attempting blend. The result is a "manly man" sound, with hints of the bluster and swagger of the Roaring Twenties. Soaring beautifully over the close, underlying harmonies is a wonderfully focused tenor voice, whose tone strikes the perfect balance of chamber choir color and the brassy, strident nasal sounds of Tin Pan Alley busking. Despite the beerhall ambience, Maennerwirtschaft sings with extraordinary precision and a light, nuanced touch. Every sliding chord moves smoothly together. Each of the very many German consonants and sibilants is perfectly aligned across all voices. The intonation is flawless and chords ring true. Maennerwirtschaft's work is a tongue-in-cheek coup that is entertaining without reservation.

The early rock ‘n roll and R&B on Bitte Nicht Aufraumen! is not as strong as these stellar tracks. The English pronunciation is excellent, but some of the phrasing is sometimes slightly off the emphasis that a native speaker might use. The vocal percussion sounds are a little overprocessed, leaving snares in particular sounding like a drum machine. The "doo bah"s of some basslines and roundness of some open vowels are a little stiff. But each song's musical style is otherwise dead-on, even when an arrangement spans several genres. The energy is genuine and Maennerwirtschaft's enthusiasm is catching.

So it's unfortunate that The Hoff Himself, Blanco-Schreck, and Schn... aeh... Mampfi get lost without the cultural context of being German. This is not a problem for Maennerwirtschaft's intended listeners, who are Germans. Though all three songs are catchy and upbeat with head bobbing melodies, just listening to them doesn't explain puzzling phrases in Hoff, hyper-cheery singing in Blanco, and chomping sounds in Mampfi. A Google search will explain the hilarious context of The Hoff Himself (so will my upcoming Forum post), but it's disappointing that Maennerwirtschaft doesn't reveal to non-Germans just how wicked they really are.

A full appreciation of the genius of Bitte Nicht Aufraumen! took me a lot of time on Google and Wikipedia, a situation Maennerwirtschaft recognized when it sent an extensive cover letter and three pages of notes with their CD. Yet I enjoyed the album quite a bit even before I allowed myself to read their correspondence. Afterward, I just enjoyed it more.

Bitte Nicht Aufraeumen! is a tricky album to evaluate. Affected with German accents, this eccentric collection of everything from American rock 'n roll classics to TV theme music to the "legendary German vocal group Comedian Harmonists", which, according to the group-supplied crib sheet, was founded in the '20s in that country and performs a kind of barbershop-rag music that is backed by piano. This in itself makes the album (whose name I don't dare try and type more than once) much less a cappella and quite more in the realm of vocal music one might consider standard. Before I delve into a review of the music, I must add that while it is nice to have an English explanation of the thirteen tracks added to help my own understanding of what Mäennerwirtschaft is singing about, the translation is not standard in the liner notes. For non-Deutsch speakers, this exclusion could prove to be a barrier to enjoying the music.

For once you know that the original lyrics to the music of David Hasselhoff's Looking for Freedom is actually saying "...My chest hair is like a coat...In the TV shows Knight Rider and Baywatch, I am the super trooper hero", suddenly the songs hit a whole new level of enjoyment. Yes, as a piece, Knight Rider is novel and The Hoff Himself is perhaps quite entertaining for the Hoff-loving Germans, but as an American trying to listen to it solely on its merit of a cappella excellence, that track and the seven other voice-only songs are nothing to shout about.

Interestingly enough, like the Swedish album I reviewed prior to this release from Germany, this collection also has its fair share of American medleys and doo-wop classics. Yet where Vocal Six excelled in interesting arrangements, pizzazz, and energy, Mäennerwirtschaft lacks originality and creativity. The soloists are quite nice, but not much of this is anything new to the a cappella scene, even as an import. The arpeggios in Pretty Twist on the Rocks' Twist and Shout are practically out of high school choir warm-up exercises. Save for the booming and likeable bass, there's little else that's at all appealing to the seasoned a cappella listener. Only You is a bit campy, even with its mid-song genre changes from tango to waltz and then to the aforementioned Comedic Revelers's rag. All You Need is Love and Chuck Manson und die Les Monkees are poor reworkings of tracks left better to the original artists, although there are some interesting effects inserted into the Marilyn Manson section for all of five seconds that might have saved the album if used appropriate throughout instead of focused right there.

I suppose the true mark of success for a foreign release is if the vocals are good enough to engage me, motivating me to look for translations and finding out more about the group's origins and history. But even with the information supplied by Mäennerwirtschaft, I'm indifferent to the music. With harmonies and arrangements that might come straight out of "A Cappella Arranging for Dummies" and songs that are old hat, the English pieces are characterless and clichéd. The Comedian Harmonists pieces, with support from the piano, perhaps convey a better idea of Mäennerwirtschaft's true personality, but sadly all but one of the translations have been left out from my RARB package. And so, while I don't want to categorize American listeners as any more sophisticated than our European counterparts, this album may simply be too far out of our cultural understanding and contemporary appreciation of vocal music and a cappella to be enjoyable.

Bitte Nicht Aufraeumen! opens with a standard oldies medley, an expected track for many male groups despite their whereabouts or language. Next up is Wochenend und Sonnenschein, a pleasant and lively song with piano accompaniment. It's actually one of five songs sung with the ivories (gasp!). The album quickly shifts to ultra-comedic with Knight Rider and Baywatch love. Sometimes comedic albums just aren't funny. I assure you, even for the English speaker, Bitte Nicht Aufraeumen! is a hoot. It's also very interesting. It's not everyday you hear the Beatles sung with a German accent and fresh beat, a pleading "Mein gorilla!", or a wacky techno song about a reptile, a tune that took Europe by storm in 2004.

But I was surprised to learn this hodgepodge of songs was very intentional — Bitte Nicht Aufraeumen! translates to "Please Don't Clean Up!", meaning that the guys enjoy their wide mix of repertoire. Eclectic line-ups are expected in Land of Many Covers a cappella, but it only works if you can sing each style equally well. In Maennerwirtschaft's case, the tracks accompanied by piano are the standouts. And in the end, I think great music always trumps the laugh factor. The piano is very quiet, so it doesn't distract the a cappella listener's ears much, but the piano loudly improves their singing, helping the blend and even the dynamics. Obviously, this is a pretty big problem if Maennerwirtschaft wants to market themselves to the a cappella crowd. The true a cappella gem was Blanco-Schreck, a medley of popular German songs from the 80s. The guys explain that they tried to capture the originals' exaggerated energy. Heck, exaggerate everything if it sounds this good!

Bitte Nicht Aufraeumen! is one of the most unique albums you'll hear, and a very endearing one, too.