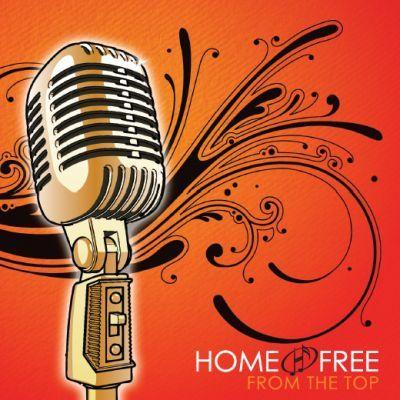 Take one look at the track listing, and it isn't altogether too surprising that From the Top, Minnesota-based Home Free's first studio album, comes off as all over the place. How could an album that's part Disney medley, part original, and part standard cover material ever seem coherent?

Frankly, it's impossible. But judging by the liner notes, Home Free didn't care much as they recorded. The notes exude the group's enthusiasm just to get in the studio and try things they've always wanted but never had the chance to try. Thus the result of all this excitement and effort is the pleasantly erratic From the Top.

And the bizarre track list notwithstanding, From the Top is an enjoyable snippet of contemporary professional a cappella. One senses an attempt to be creative and innovating while remaining loyal traditional arranging and producing methods with this album. Several of the attempts at original music fall short, however. How Nice I Really Am is predictable; Time of Your Life and Spellbound lack not energy but the strong hook of Life is Easier With You, the album's best original piece, to make them palatable.

The album's opening two tracks are better examples of the group's striving to mix things up. The total revamp of Bridge Over Troubled Water may not be groundbreaking or as powerful as the original, but works nonetheless. So does Change the World; Chris Rupp's arrangement flips Clapton's smooth vocal on its head, replacing it with a powerful turn by Matt Atwood, which fits well with the urgency and energy of the backing vocals. Both feature the crisp tuning and blend and good solos that characterize most of the album.

There is, though, the matter of the egregiously long Disney medley that monopolizes the album's middle third. Of the four remarkably literal takes on the classic numbers (all from different movies), only Go The Distance comes close to paying the original justice. The rest sound thin and lack texture, as if their arrangements were incomplete. Matt Atwood wanders in and out of his French accent on an uncharacteristically poor solo on Be Our Guest, and Friend Like Me is too much of a sleeper to be placed alongside the three other Disney megahits.

From the Top meanders off to a vanilla ending after the medley. The final two covers are perfectly adequate, but nothing more: a disappointing end to an album that started so well. For a first effort, though, From the Top should be considered a success. Now that the group has gotten the "I'd love to someday do this song" bug out of its system, the group can return to the studio with a plan and definitive voice for its second project and have a go at creating not just a great CD of songs, but an album.

What might be comedy to one person simply isn't funny to another, just like good music to one person is aural torture to someone else. Home Free bills themselves as "a perfect fusion of comedy and four-part harmony", and I listened to this album several times to find any humor in the album. Other than a line of "I've been stalk- ... loving you" (in the original song How Nice I Really Am), nothing comes close to humorous for me, and I was left confused and unfulfilled.

If you're looking for a group to perform at a corporate event, on a cruise ship, or to be the next sound for a commercial about sparkling teeth and toothpaste (think circa 1950s), look no further than Home Free. Their bubble-gum happy sound, and an album that can sound auto-tuned, says "Smile along with us! We're all friends!" on nearly every track, which doesn't jibe well when singing about something other than Disney® (don't worry, there's a medley from your favorite cartoon characters).

If you've read my past reviews, you are no stranger to my opinion that auto-tune and other processes should be used sparingly so as to not strip the raw emotion of singers or overall mood of a song. At times, Home Free seems to use auto-tune and other post-production effects so heavily that these same sounds may well have come from a synthesizer than a human voice. The production is clean with solid cut-offs and a well-balanced sound from bass to tenor to vocal percussion, but a total lack of any dynamics or feeling from anyone beyond the soloists was utterly disappointing. How can you take an impassioned, tug-at-your-emotions song like "Ain't No Mountain High Enough" and have it dripping with more sugar than a Krispy Kreme? Home Free pulled it off successfully (or unsuccessfully, depending on your perspective).

Along with the aforementioned songs, they delve into a few pop tunes (Change the World, The Way) and pull out more feel-good tracks like God Bless The USA but all of them sound the same — lots of production and uninspiring singing. Chris Rupp, the arranger on the majority of the album, does a good job keeping arrangements moving by mixing up verses, choruses and bridges with some variety, but it's not enough to salvage the album. Fortunately I was able to listen past all of the things I disliked about From the Top and appreciate his talents as an arranger. All told, you won't listen to this album and think "there's bad singing on here" or "these guys don't know what they're doing", but you won't listen to it again unless you want to picture them performing at your next insert-generic-trade-show or high school event.

Home Free will strongly appeal to fans of the Colorado Sweepstakes champion group, Face. Simple, straightforward arrangements that serve the song over the syllables, strong rock leads and solid, unobtrusive production — it's a formula that works for both groups. But where Face rarely deviates from rock and funk, Home Free is a bit more liberal with their helping of humor, cutesy songs and even the lush but cheesy bit of Americana, God Bless the USA,. Lots of variety, but a little blurry on the identity.

Fans of the big collegiate sound with its current emphasis on creative background syllables and multitudinous interwoven layers aren't likely to enjoy the arranging on From the Top. This isn't a recording that reveals tiny hidden complexities on multiple listens. But neither does this release fall prey to the traps of the multilayered big college sound. Backgrounds are never unintentionally funny and they don't compete with leads.

I wouldn't be surprised if the Disney Medley and How Nice I Really Am made a splash in collegiate circles. The nostalgia of the former and sophomoric humor of the latter combined with effective, transcribable arranging are sure to inspire the flattery of imitation.

While I enjoyed listening to this release, I had a hard time reconciling the rockin' side of Home Free with their funny or cheesy sides. While this might work well in a concert setting and it may equally well please fans who want to hear the group's full repertoire, it left this listener a bit befuddled as to the group's "true" nature and made me second guess just how rockin, even these light rock covers were. "All things to all people" does not a signature sound make. Nonetheless, whichever frosted mini side of this group you latch onto, you're likely to enjoy From the Top.