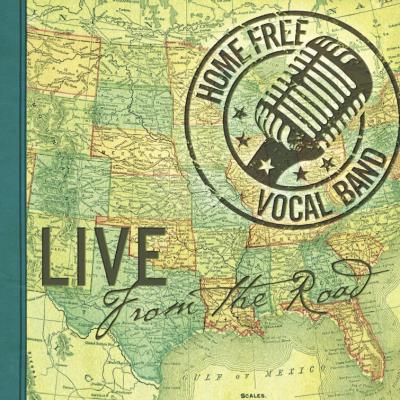 Home Free's Live: from the Road is a high-energy delivery system for incredibly predictable, heavily recycled humor and upbeat but oft-repeated song choices. But before you rush to judgment, remember: the formula underscores Disneyworld, Glee, sitcoms, and most of the entertainment we think of as commercially successful. The audience at Bemidji High School absolutely adores these five guys, and you will too, if you turn your ironic hipster dial all the way down and your classic American rock and oldies dial all the way up.

Home Free has impeccable, fast-paced timing in its comic delivery. The guys know how to read an audience and they press all the right buttons. They aren't the cool kids or the artsy kids; they're the "Awww shucks we're just having a good-old time, if that's okay with you" kids (well, parent-age kids). But listen up singers: making this stuff work requires high energy salesmanship and Home Free knocks that out of the park. It's a lesson that many a group could learn from.

All Home Free's singers are enjoyable and technically strong (although the album sounds as if tuning has been corrected in post, so reality may differ). The group boasts a standout tenor (vaguely reminiscent of the 80s singer, El Debarge, but better), an impressive percussionist (who combines both vp and beatboxing techniques to great effect), and one of a cappella's truly great basses, the twangy, soulful, master of range, Tim Foust.

Lil' Red Riding Hood is a masterclass in bass solo singing and this track alone is an absolute must-own. Revisiting and surpassing his impressive solo on Blue Jupiter's Ear Candy, Foust takes The Bobs' classic cover to new levels with artful melismas and a truly stunning use of range. Low Cs abound, but this bass is also perfectly happy popping into a high tenor B-flat in falsetto, or belting out a powerful tenor G with ease. Forget all that, because it's the song's ending that will make you hit rewind on your iTunes as Tim delivers a sustained low G below bass low C. Yes: a fourth below the lowest note that most low basses can sing on their best day. No, it's not an octave pedal. Oh, and ladies, he's also tall with great hair. So, enjoy.

In a fit of programming genius, Home Free follows this wall of bass-iness with high tenor, Rob Lundquist, on the perfectly suited Hey, Soul Sister. It's arranged with deft dynamics and smart special aca-effects, but miraculously, it doesn't lose the simplicity or infectious energy that made the song a hit in the first place. And, for my money, this is Home Free at its best: not clever, not cutesy, just great, soaring voices.

The group even applies that gestalt to originals, as Foust's country tune I've Seen demonstrates. It's a simple and genuine Americana melody with lyrics to match:

I've seen rain on the Mississippi Delta
I've seen the sun rise on Baton Rouge
But of all the things these eyes have seen, baby nothin' compares to you

Which brings me to credits. While Tim Foust wrote (and is credited with) I've Seen, "The Beatles" performed but did not write I Saw Her Standing There. That song was written by two Beatles in particular, John Lennon and Paul McCartney. That's who should be credited and that's who should be paid their 9.1 cents per copy. This lazy oversight is particularly discouraging to see in a professional band like Home Free — a band that has its own originals and should understand the need to credit the artists whose work is essential to our music. I imagine Tim would be disheartened to see future recordings of I've Seen credited solely to "Home Free"; it would certainly raise an eyebrow as to whether he had been paid his compulsories.

There are chuckles to be found, but's a rare person that will listen to the humor on Songs that Didn't Make the Cut repetitively. But there are treasures on Live: from the Road, and every listener will be able to appreciate the non-stop energy and virtuosity that is Home Free at its best.

What are the advantages to doing a live album, especially in today's increasingly studio-obsessed times? Can the electricity of a live performance still be felt, even if the listener isn't in the room with the band? Does "stripping down" and moving away from the tracking and overdubbing and "studio magic" bring a more honest purity to the recording?

Well, dear reader, you may be guessing that the answer to all of the above is "It depends". And you're quite right, it absolutely depends on the band in question. Truly great live albums through the years, such as The Band's The Last Waltz and Queen's Live at Wembley Stadium, have made their mark through infusing high energy and emotional resonance into the recordings. The best live albums are the albums that set out to accomplish things that studio albums cannot.

And on that front, Home Free's sweet and sincere Live: from the Road succeeds with flying colors. Culled from two live high school performances, Home Free imbues the proceedings with high-flying energy, old-time showmanship, and (most of all) exceptional talent. All the old tricks are at play on the album: audience participation, witty interludes, and a decent number of requests for the audience to scream louder as they cannot currently be heard.

It's really hard to describe the album as anything but "fun" or "good natured". Home Free's live show is obviously designed with the intent of getting kids interested in music, and the repertoire reflects this: well-known tunes, a cappella staples, and sing-alongs populate the track list. For a jaded critic or a worn-out a cappella listener, the material often veers into the realm of being hokey or dated, but for the casual listener it's nothing but a good time.

Home Free, as a band, is tight. The bass and vocal percussion groove, and the upper voices fall into place exactly as needed. The soloists are uniformly excellent. The arrangements are professional and efficient, using the available singers to create the fullest possible sound, and they showcase a variety of textures and sonic pallets. The band's time feel is the only noticeable shortcoming in this live setting; grooves tend to feel pretty elastic, and sometimes there is a disconnect between the rhythm section and the upper voices.

Home Free is an all-male vocal band from Minnesota, and Live: from the Road is a live album (if you couldn't guess from the title). It was recorded over two days in March, 2012, but the recording sounds seamless, as if it was all performed on the same night.

Despite the smoothness of the recording, this is still a live album and carries with it all the warts that live recordings usually have — and this isn't unique to the a cappella world. Audience noises (laughter, applause, call-and-response, etc.) bleed into the recording, there are occasional tuning/tempo issues (although, quite impressively, these are very few and far between here), and there are tons of jokes, intros, and other moments that are likely very engaging in person but just don't work on a recording — especially after more than one listen. Such moments really influence my desire to hear the album again; things like the instrumental breakdown during I Saw Her Standing There, the audience participation moments (It's All Right, e.g.), and even entire songs (Songs That Didn't Make the Cut) are tolerable or even moderately funny without the visual aspect of a concert, but once I've heard it once, I get the joke and don't need to hear it again.

That said, there are a few truly impressive moments on Live: from the Road that deserve to be highlighted. The vocal trumpet on Haven't Met You Yet is outstanding; it really adds a nice flair to a song that's been done so many times this year. The arrangement of Hey, Soul Sister has some gorgeous nuances to it, especially at the beginning; unfortunately, the group doesn't seem to credit who wrote the arrangements in the liner notes so I can't cite anyone by name, but this arrangement is definitely one of the highlights of the album. Tim Foust's original I've Seen is excellent as well; this is a great song that really comes across well in the live setting.

Most importantly, the guys' energy is palpable: while I didn't love every arrangement choice (some classic songs such as I Saw Her Standing There and Bridge Over Troubled Water have a glossy jazz feel to them), the group's style definitely keeeps the concert moving along. There is never a moment when the concert lags in energy, and that's one thing that does translate beautifully on this album. Home Free isn't doing anything revolutionary with its song choice or arrangements, but these singers are definitely having as much fun on stage as the audience is having in its seats: this certainly comes across loud and clear on Home Free's live recording.

To order this album, visit the Home Free online store.