After This I'll Show You My Rock Collection (2007) 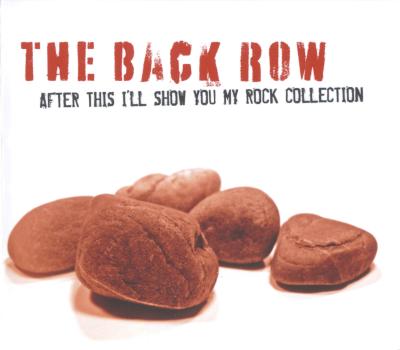 The gentlemen of The Back Row are from Colorado College and After This I’ll Show You My Rock Collection is their second album. The Back Row is the brainchild of Ian Goldstein, who formed the group in 2003, contributed 8 of the 11 arrangements on the album, and has recently graduated, leaving his “baby” behind. Ian should be very proud of what he and his group have accomplished. It will remain to be seen how the group fares now that its driving force has moved on to other things.

On to the merits of the album, analogized: A former law professor of mine is a fabulous chef. He often invites people to dinner and asks them to bring whatever ingredients they desire. He then uses those ingredients to whip up a delightful tasting menu. I once asked him, “What would you do if your guests brought hot dogs and Twinkies as ingredients?” He wrinkled his nose and replied, “Then they would eat hot dogs and Twinkies.”

So, a master chef can only hope to showcase his ingredients. How does this apply to the Back Row? The aforementioned founder Ian Goldstein recorded every track on this album (the ingredients) but then shipped it off to Bill Hare (the chef) for mixing.

While there is something to be said for groups who track things themselves, there is a risk that the sound will lack that crisp professionalism that can come from recording with, well, a professional. Bill works his magic, though, and we end up with a delightful tasting menu. There are some standout tracks (Separate Ways, Sexyback), but it is not clear whether these and the other tracks coast on modest ingredients that have been whipped into much better shape by a master chef.

This is not a judgment on the use of studio effects, but the use of ample studio effects makes it difficult to evaluate arrangements and the underlying skill of the group. Without all the effects, the pumped up bass and EQ’d percussion, what would be left? The soloists are quite good, and the underlying arrangements are competent and accurately capture the original songs. But there are no “gems” for the ear, no clever use of words in the background, no weaving in of other songs, and I can’t even tell what the original syllables were in a lot of tracks because of the effects.

Some of the songs just can’t sound great live: What a Feeling (a trance song) is a studio creation, not an a cappella song.

Still, I enjoyed listening to the album — not because it was a cappella, though. I enjoyed it because the album has a lot of songs I like and they sound just like the originals. That is a big accomplishment in and of itself, but is it still enough in this brave new world of big name “chefs”? Why listen to an a cappella transcription of a song when I could listen to the original? Where is the added value?

Make no mistake — The Back Row is an energetic bunch who clearly strive to produce high-level a cappella, as demonstrated by their gorgeous (and surely expensive) album design, and tapping of a cappella aficionados Bill Hare and Mike Boxer (from Six13) for this album, with thanks to Deke Sharon, too. But by the end of the first few tracks, we've already heard the shortcomings of The Back Row at length: men straining for high notes, shaky intonation, and a heavy reliance on engineered effects to save what might otherwise be weak and mundane on After This I'll Show You My Rock Collection.

Cool production is great. Singing with precision is even better. I suspect Bill had to dig up some extra razzle-dazzle to keep this album at an acceptable level, as several tracks feature light, pure vocals and an absolute arsenal of distorted, probably-meant-to-distract noises, as heard on What a Feeling and Separate Ways. Yeah, the engineering ups the funk level. But a balance of solid musicianship with funky engineering would have been extra sweet, taking The Back Row from a group with good advisers to a group that holds its own. Separate Ways does have an excellent front man: soloist Jon McDonald has the sort of raw, gritty tone that does Journey justice. I Don't Want to Be features another great lead given by Casey Andree, though the unpleasant and highly exposed 'gah-nah' bass line takes away from an otherwise solid track. And though the engineering work on Sexyback is modest compared to other tracks, the effects still make the JT tune sizzle.

Razzle-dazzle might be a Back Row speciality, but in the absence of solid musicianship, ballads just don't hold up. In a throwback to the Boyz who swooned the world in the early '90s, The Back Row gives an earnest rendition of I'll Make Love to You without a soloist capable of this riffing R&B feat. What Hurts the Most, the poignant country song by Rascal Flatts, also comes up short without a lead who can carry it to the end. Though both performances weren't highlights, neither soloist held back, and really, that effort is what makes The Back Row a group on the move.

Based on the praise for their first album and their current gusto, I'm pretty sure these guys will have a long Colorado tenure.

After This I'll Show You My Rock Collection is my first real love-hate relationship with an album of my RARB reviewing career. How could an album so slick, so technologically advanced be so incredibly underwhelming? How is it that I've been listening to the same group sing both Cupid's Chokehold and I'll Make Love to You? Spin after spin, I just couldn't get a real grasp on this album.

The Back Row have released an unbalanced album, the byproduct of (what seems to me) excessive risk taking and reliance on studio production and not enough attention to what it is they were recording. Heavy, well-produced bass or baritone lines dominate many songs, but there's rarely enough of anything else to give the songs a full feeling. The verses suffer the most (see I Don't Want to Be, Cupid's Chokehold, What a Feeling, and Dani California), as the tracks on After This generally pull themselves together for their choruses. The source material ranges from smart, a cappella friendly picks like I'll Make Love to You to the endlessly repetitive What a Feeling and the inane Cupid's Chokehold. The Back Row's soloists are just as inconsistent: Casey Andree and Jon McDonald shine on I Don't Want to Be and Separate Ways and I'll Make Love to You respectively, but the album has its fair share of sub-par performances. Ed Stevens and Joe Wykowski are unconvincing on Sexyback, and Matt Mrachek just didn't do it for me on the Rascal Flatts cover. Bill Hare's mixing gave the album an initial "wow" factor — but there just wasn't anything here to hold my attention or get me excited.

Don't get me wrong — there's a lot of good here. The Back Row show flashes of brilliance, as in the aforementioned choruses of many of their songs (Dani California has an especially strong chorus). Whenever their arrangements and production choices gave these boys a chance to really sing, regrettably only twice on this album, they shine. They are obviously a group eager to be on the cutting edge of recording technology and tackle a wide variety of source material.

After This may be hit or miss and a bit disappointing, but I'm coming away from this album excited to hear what they do next. If After This proved anything, it is the potential for The Back Row to become the next big thing in men's a cappella. This is, after all, only their second album — who could reasonably expect them to have hammered out all the kinks already?