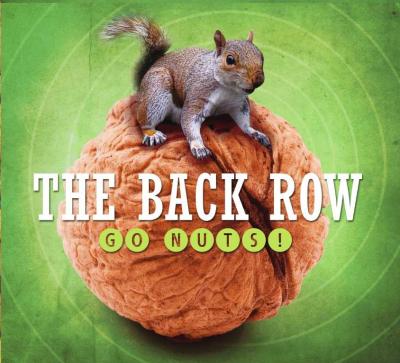 Fact: any a cappella group that can take an everyone-alive-knows-it song like Black Water from The Doobie Brothers and make it sound modern and hip is probably worth listening to. The Back Row's latest release Go Nuts! is certainly worth listening to; it's peppy, it's got a party atmosphere, it packs a punch. There's nothing overwhelmingly innovative here, but everything is sung well and sung with great gusto (wish I could add a little plus sign after the "5" for "Energy/intensity"). Go Nuts! is the kind of album that can both start and end a great night, and that's a pretty swell thing indeed.

Whereas After This I'll Show You My Rock Collection seemed too reliant on studio work, Go Nuts! strikes a good balance. You'll still hear plenty of extra finesse from Bill Hare (which is part of his job, after all), but you'll also hear such novelties as natural phrasing, vocal accuracy, and extra snappy diction. Well now! Add the more interesting track list and stronger soloists, and Go Nuts! is a step up in every way.

The Back Row's vocal maturity works well on the particularly atmospheric songs. Fireflies is intricate and intense, and the guys make it seem like a cakewalk. They also easily handle the very specific character of Cake with Wheels, and capture a peaceful groove on Brighter Than Sunshine. The timeless spirit of Billy Joel is also alive and well on Only the Good Die Young. A lesser group couldn't handle these advanced nuances.

There's only one weaker track, and it isn't weak because of the vocals, the energy, or the interpretation. Tubthumping builds itself on unison shouting, which adds a lot of fun and happy mayhem, but it's questionable whether all these shouting voices are always in sync (it's a very loud, very busy track), and at the end of the day, it just sounds too frenetic. With its quick tempo, this song really needs to be super clean.

But one lesser track doesn't take away from the overall huge effort and resulting payoff from The Back Row. Go Nuts! is an upbeat delight, and the guys should give themselves (and their squirrel friends) a nice pat on the back.

We here at RARB seem to be facing an ever-increasingly common problem: the greater body of work in the a cappella community is getting too damn good. Why a problem, you ask? Well, it's certainly no issue for my ears. But when I sit down to write, I oft find myself inclined to write the same thing: "Well, this would have been outstanding fifteen years ago!"

Well, Go Nuts! would have been outstanding fifteen years ago. But it's not fifteen years ago, it's today, and today, Go Nuts! is only slightly above average. That's not to say there isn't quality to be found on The Back Row's latest release; it's just to say that you've probably heard lots of this type of record before.

What you probably haven't heard is a version of Fireflies that tops theirs. The intricate arrangement and the bright, likeable soloist make this track a standout. I also really dig Check, the opener, for its introductory energy.

Beyond that, you've got a nice collection of a cappella covers ranging from The Doobie Brothers to Billy Joel to Incubus. By 2010's standards, Go Nuts! features fairy standard soloists and decent production (a little muddy sometimes, and a little heavy on the studio magic). I actually quite like the song selection, but the arrangements are often simple or too obscured by the post-production work to really let the group stand out. Still, you can't help but enjoy the groove found in Wheels or the fraternal debauchery present in Tubthumping. It's definitely a fun listen once or twice.

Forgive me if I don't sound more excited. The truth is, we've got a nice record here. I think it's above average in quality. But even so, hundreds of other groups across the country are putting out records a lot like this one. The question to the reader is, how much disposable income to do you have to buy them all? And the question to groups out there is, what the heck are you going to do to stand out nowadays?

Go Nuts! is bizarre, off the wall, and fun! Almost every track has layer upon layer of backs, overdubs, and noise tracks. It's as if the production team brainstormed three or four things that could improve each part of each track ... and then did all of them. This album sounds like producing it was a party from start to finish.

Upon hearing the first notes of Check, you know you're about to experience Bill Hare at his freest. This opener sets the album's tone as strongly and unabashedly nuts. This track has more sforzandos than you'll know what to do with, a massive brass section, a party track, a Beastie Boys quote in the bridge, and has had just about every studio trick in the book applied to it. I half expected Michael Bay to jump out of my speakers and blow up a helicopter.

Later on comes Tubthumping and its iconic, hooligan-inspired gang vocal refrain. It's infectiously raucous, and almost worth the price of the album on its own.

Some middle songs, you could take or leave. Brighter than Sunshine and Black Water don't grab a your attention like the other tracks, and Man On The Moon hits you over the head with the same idea over and over again. There are only so many ways to put a voice through a Lesley speaker.

The Back Row made good choices in fitting their song choice to their available soloists. Unfortunately, this keeps them from the highest rating in solo quality. They're all well-executed and appropriately assigned, but nothing really blows the listener away. Ed Stevens, however, deserves recognition for putting on an excellent Brandon Boyd of yesteryear. He shreds himself on Nice To Know You. The song is perfect to close this album; it leaves you feeling like you were just refereeing a fight between Chuck Norris and a herd of wildebeest.

Go Nuts! is exactly what it promises to be. It's slick and professional, and completely over the top. Some of these songs will be on regular rotation on my (aptly named) "Go Nuts" playlist. The whole album, probably not. For now, I'm going to go listen to Tubthumping again and do a Matt Emery dance.