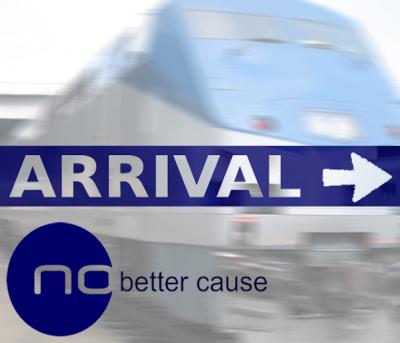 I think the other reviewers are gonna dig Arrival, but to put it up front here, I've gotta say that it's not really at the top of its game. Sure, production is slick, it's got a sweet intro with Q-U-E-E-N as far as rhythm, beats, and smooth vocals go, but for me, No Better Cause's album is too much of a mish-mosh of genres and styles, done up to pass off as R&B, to make any sense as a piece in its totality.

So we'll start with the good stuff. Musically, I enjoyed a lot of the originals here, which are Duwende and House Jacks-influenced. They've got great composition and execution, especially the R&B pieces like the first track, bass-driven Times Like These, and The Way It Should Be. Smooth Operator is a decent interpretation; it's grounded in samba and cymbal hi-hats with a good jazz vocal line woven in the middle, but it breaks down into a sort of bass riff that ruins it for me.

But in the song-writing category, No Better Cause needs some better lyricists. They're so '90s boy-band, so catered to the 'tweener set that one can't escape the sentimental, mediocre pop drivel dripping from the soloist's lips. Never is the biggest culprit with junk like "You pushed me to the limit when you played with my mind, now you'll never get me back, I put the past behind me". Not only is it contrived into a too-fast vocal line, it's pretty crappy. I don't even think Nick Carter would have deigned to sing this.

Further, I can't help but scoff at the new arrangement of Dust In The Wind. Forget the elegant simplicity of the Kansas masterpiece; No Better Cause's version is again a pop-synthesized *N Sync knockoff. It's smooth contemporary drudge, with JT-inspired hiccups and background vocal slides that sound jarring when one recalls the original. Add to that, the track pushes on for an unnecessary four and a half minutes.

What blows my mind, though, is that there's perceivable talent heard here. If No Better Cause stuck to the pop-inspired yet firmly gospel like Rock My Soul, I'd find the album so much more cohesive. But toss this in with Valentine, another sappy track whose every other word is — you guessed it — Valentine, and one is not quite sure what No Better Cause's "cause" really is. Are we singing for a woman or for the Lord?

I don't mind either one; I'm all about love songs and spirituals. But to try and create a cohesive album by making everything stylistically the same detracts from the essence of the music. It places emphasis on bad songwriting that might have stayed hidden had the songs stayed true to their originality and varied at least a little. Arrival is sadly a one-trick pony, well-executed, but repetitive and tired. This reviewer requires a little more demonstration of technique, a little more creativity of style to be impressed than the stuff No Better Cause offers in its latest album.

Oh, and PS: There is nothing I hate more than a website that automatically plays music.

Great talent has arrived! With fresh takes on covers, a collection of originals, and one heck of a percussion/bass combo, it'll be hard to stop listening to No Better Causes's Arrival.

No Better Cause is comprised of five guys from Lincoln, Nebraska who can seriously wail and effectively create their own instrumentation sans standard production tricks. That said, the production is still top-notch and enhances their natural talent well. You'll particularly enjoy refreshing Bill Catlett's difficult bass work, which sounds outstanding and adds wonderful character to the group's overall sound. (As an aside, I had to check their online press kit to see who sings bass. Listing each member's voice part, and which solos they sing, should be included within the liner notes.) Playfully woven into Catlett's bass is Michael Evans on vocal percussion. These two are a powerful, gifted duo.

The covers on Arrival take unexpected turns toward greatness. Smooth Operator is as soulful and sexy as you'll ever hear it. Dust In The Wind is skillfully creative, with crazy chord progressions, a novel edginess, and lots of fire from the Catlett-Evans team. Rock My Soul is a super fun, traditional power gospel — one that you wish carried on a few more minutes. And Let's Groove really sheds a new sound on Earth, Wind, & Fire. The Lincoln 5 are clearly musical inventors.

Having six original songs and six covers on Arrival is a nice balance. However, some of the lyrics for the original songs need work. Never is a serious offender in the cliché/overdone pool, with words (taken from the liner notes) such as: "When I tell you that I love ya, you're probably thinking 'this is all pretend'. Well, here's another song about ya, and this'll probably be the end. I never shoulda toldya that I loved ya, I never shoulda said I'm thinking of ya." Given their advanced music, such elementary lyrics are unfortunate. Times Like These and The Way It Should Be are also built from basic lyrics that don't complement the sophisticated music. A little more imagination here would really make this vocal band hard to top.

The blend and tuning sometimes slips, too. Exposed tenors and the occasional flat voice creeps into the mix. When there are only five voices, it's easy to hear imperfections. Still, the talent and joy present on this album is unmistakable. Purchase Arrival — you'll be glad you did!

On Arrival, No Better Cause seems to have arrived at a point where they want to sing more than Christian music. If this album is any indication, they will probably continue in this direction, and might well be advised to do so. The album takes on pop covers, originals, and Christian contemporary tunes with decreasing success and passion.

No Better Cause brings a nice, street-corner groove to their music. Anchored by strong traveling bass lines, as well as some nice arranging in general, NBC crafts a unique rough-hewn sound without sacrificing musical complexity. Their style is a nice complement to some soloists, particularly the performer who sings the teeth off of Dust In The Wind.

The production on Arrival is generally faithful to the group's distinctive sound but too frequently disappoints. Certain tuning flaws could have been easily corrected without diminishing the organic feel. The percussion creates the effect of a machine trying to replicate human beatboxing. I had to check the liner notes to make sure this wasn't the case. I'm not sure the style is conducive to this sort of sampling, and one gets the impression that the group was a bit unsure of how to use all the bells and whistles afforded them by the studio.

More disappointing is the group's failure to execute on tracks that should be closer to home. The gospel tracks here, infrequent though they may be, are uninspired and lack the finesse that elevates a catchy cover of Earth, Wind and Fire's Let's Groove: perhaps this portends a new musical direction for the group, which would not be unreasonable based on this effort. Part of the problem is lackluster source material. The soloists do their able best with a turgid DC Talk number, and the original If God Is My Witness is indicative the group's songwriting skills.

To the latter point, I suppose I should be pleased that No Better Cause has produced an album comprised half of originals. I would be more enthusiastic were the originals on par with the covers. It's easier to sing catchy hooks when catchy hooks are present in a song. On the whole, the original tracks lack musical direction. I have no idea what the group is trying to accomplish with the dissonant Valentine, which lays a cutesy love song about correspondence on top of a curiously dissonant background. Dissonance is not the group's forte.

Even on some of the weaker originals, though, No Better Cause succeeds in instilling its trademark sound. These dudes can sing, and I am excited to see what they can do when they can find that heart of what makes their covers so compelling. Until that time, I can't strongly recommend the album as a whole, though you could do much worse than Arrival.