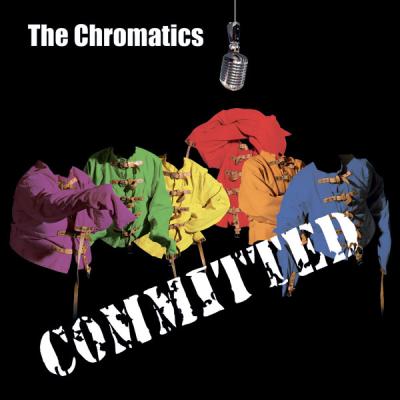 The members are all admitted science geeks (their website isn't clear on this, but I think they all work for NASA), which perhaps accounts for much of this quirkiness. Committed mixes social commentary with pure strangeness, and the total effect is oddly pleasing. None of the vocalists would win a Best Soloist award, but I can safely say that Committed is the most creative and interesting a cappella album I've heard in a long time.

Mixing spoken word, vocal sounds, and singing, the arrangements are clean without being simplistic and the singing is in tune and appropriate. But Committed isn't really about the singing, it is about the songs. For example, really terrible songs can be made more than tolerable by a stellar soloist, and cheesy lyrics can be downplayed when the melody is really beautiful.

The Chromatics' original songs aren't of the catchy hooky pop variety, but they are very well written both lyrically and musically. It is all about the lyrics, which are just crammed with words. Yes, all lyrics have words. But when I say crammed, I mean there is none of the "oh, yeah, baby, love, say, rain, cry, please, miss, do, take, give" generically interchangeable words and phrases found in so many amateur attempts at original music.

Most of the songs have a message. We Must Relax comments on the frenetic pace of life, noting that even we do get a vacation, we rush through it. La La Land comments on the fakeness of people on television and magazines and the fake promises that you too can be like them. Suburban Dream comments on all the fixtures of suburbia, including granite counters and "four cars, no kids".

There are also some rather silly songs. In Science of Love there is a spoken interlude involving drilling open a woman's skull and learning it was filled with yummy chocolate. In Lonesome Cowboy Chant it took me a few listens to realize that his Cowboy Chant was pig Latin for "I don't like cows they really stink!" (That made me laugh out loud).

This isn't an album to be listened to casually. It requires an active ear. The music is different enough that it probably won't become a favorite, but Committed is definitely worth a listen.

The Chromatics have titled their latest album Committed. They don't mean "committed" in a determined "We're committed to our music!" sort of way. No sir: they mean they're committed in an asylum.

But the straitjackets on the cover probably give that away. And they're even colored straitjackets, because they are, after all, The Chromatics.

You'll probably need to listen to Committed twice in a row. During the first run, you'll be left saying, "Who are these people?! Why are they obsessed about going off the deep end?! This is the most bizarre a cappella album I've ever heard." And your thoughts would certainly be valid. But start from the beginning again, and this time enjoy their creativity and amusing lyrics. I'm sure their ... nuttiness ... will grow on you.

There are certainly heavy themes present on Committed's tracks, almost all of which are originals. Mostly we hear about how life in the working world translates to life in suburbia (not well, it seems). Throw-in elements of science and technology into the mix (read their online bios to understand their inspiration), and you've got quite an existential album. Passing Notes reveals: "From empty homes in suburbs that don't know us, typing e-mail just to keep each other sane." Tongue-in-cheek Science of Love states: "This love thing, this teasing specter, it's gotta have a cause since we're just a bag of chemicals that follow simple laws." And even with the bittersweet lyrics of Life Cycles, where we affirm we're all just passing through, there's a tenderness present rather like Kermit the Frog singing from his pond. The songs on Committed continually remind me of the song "Once in a Lifetime" by Talking Heads. Because you may find yourself living here, you may find yourself there, but still, the days go by.

Musically, there's room for improvement. While a few of their arrangements have memorable harmonies and textures, many sit soundly in the average category. Offsetting their lyrical achievements is their lack of strong solos, all of which sound just fine, but never more than that. The group sound is also just fine, but again, never impresses. They're in tune, they're clearly enjoying what they do, but the energy is a bit low, dynamics are sparse, and the blend could be snugger (like their straitjackets).

You'll probably find Committed entertaining, or downright ridiculous. Either way, props to the The Chromatics for reminding us that life makes us all a little loopy, but there's still time for fun.

Purists who used to listen to Weird Al will want to pick up this spunky, pop/jazz sextet's album, Committed.

The Chromatics' music, as the cover art implies, is not at all normal. Ten of the eleven tracks are original, and their lyrics are satisfyingly diverse. They offer satirical perspective on today's American lifestyle, a scientific dissection of love, and an ode to bad hair days. Refreshingly, the Chromatics avoid the themes of relationships and problems therein, which seem to provide low hanging fruit for so many budding songwriters.

Instead of the overly dramatic pain and love songs that saturate the airwaves, The Chromatics keep it light and playful. "Our spiraling molecules all look the same/ Must we always be fumbling and fighting in vain?" Many of the themes are serious, but they don't beat us over the head with the drama.

The raw tuning and the organic rhythm section will please some and frustrate others. The tuning isn't perfect, but it sounds 100% natural, and the sound works well with the character of the group. The percussion and bass fall far short, however. Adding punch to the percussion and depth to the bass would really add a lot to playfulness of the music.

Not all of The Chromatics' musical and lyrical gestures succeed. The bass/alto duet in Passing Notes feels very awkward, and the bass syllables in Sunday Morning, Yellow Sky are distractingly obnoxious. The reggae vibe in Life Cycles works well with the lyrics, as does the witches' hex vibe in La La Land, but The Science of Love is just awkward in a "Hide me, Ben Stiller doing something embarrassing" sort of way. Suburban Dream is predictable.

I can't say I enjoy all the music, but I certainly appreciate the creativity and personality The Chromatics pour into their performance.

To order this album, visit A-cappella.com or send a check to: