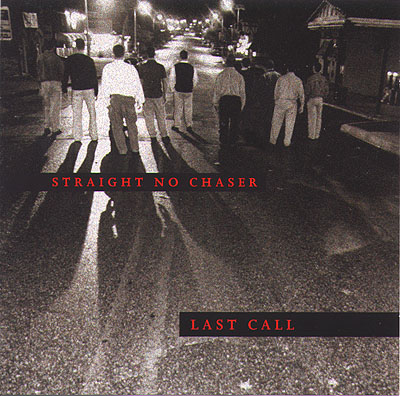 Hot damn, folks. There is a new presence on the college scene and they are from, of all places, Indiana.

Jerome Collins is one of the best soloists in the country. All of the soloists — and by extension most of the group — have voices that would stand out in most other groups. That such a group could be assembled in just two years, and come equipped with such a range of interesting, ambitious repertoire is remarkable.

This is a first album. It's a baby group. I bet their heads are the size of prize-winning pumpkins, given the accolades they've amassed so quickly. Their youth even gives them an out on the plagiarism front - yes, they do copy the Virginia Gentlemen's Insomniac note for note, but they do it as well or better and after all, they are new.

Ghost Train seems to be the favorite of the a cappella establishment, and it is nice, but it is a distant third in my list of favorites. It's very nice, very subdued, could have come from anywhere. I am drawn to This is How We Do It, with its better-than-the-original solo and kickass slowdown after the rap bridge. And for sheer listener involvement, it's tough to top Hi-De-Ho, which is definitely closer to sultry than any group of college boys has any right to be. I was singing it for days, and it's been a long time since any college a cappella track has landed in my head.

Welcome aboard, guys. Good luck with that sustainability thing - you've set yourselves quite a standard.

Just like the first song on this album says: "This Is How We Do It". This is how most college groups should do it.

Straight No Chaser is a group from Indiana University that is just oozing talent and potential. They have made themselves quite a name in the Midwest, as well as the nation. Last year they made it to the (currently defunct) National Finals of the National Championships of College A Cappella. While they did not win, they were quite a presence at the competition.

Last Call is their second album, and hopefully not their last. Their first album was not a great album, but it was good. This album is a totally different beast. It is polished, it is well produced, and it is done with a real sense of professionalism. Probably the best college album I have heard in the past year, with the possible exception of the latest Rochester Yellowjackets album. The production is really what sets this album apart from the typical college album. The group has a really balanced sound, where nothing sticks out inappropriately. Not even the percussion is overdone, which is a common faux pas among college men's groups. And it's not just the sound production. The jacket design is clean and classy as well. (College groups take note!)

Starting with a kickin' version of Montell Jordan's This Is How We Do It, they give you 11 more songs filled with style, soul, and good (often great) soloists. Other songs that are really well done are Marc Cohn's Ghost Train, Jamiroquai's Virtual Insanity, and Usher's You Make Me Wanna. When it comes to soloists I really like Jerome Collins' voice, who is the soloist on a few of the best songs on the album. Coincidence? I think not.

I have very few problems with this album, but there is one worth mentioning, and that is the group's choice of singing the Virginia Gentlemen's arrangement of Insomniac. For those of you who have the Best Of College A Cappella Volume Two, you know this song well. It is probably the signature song of the whole album. Straight No Chaser chose to do the same arrangement of the song on this album, and they just don't do it as well. The way I see it, if you are going to do a cover of a cover, it HAS to be as good as that first cover if not better. Since the Virginia Gentlemen's version was just SO outstanding, this makes the SNC version rather lackluster. It almost seems a bit cocky of them to try and emulate it. It was good, but not nearly that good.

But other than that problem, there is nothing else to say, other than this: BUY THIS ALBUM. This is worth the money.

Ah. Finally, some keepin'-it-real grooves at the collegiate level. Exceptional studio production values, tasty solos, and silky smooth back-ups make SNC's Last Call a true pleasure and a certain repeat play. Cross-over R&B is the main "flava". And the basses are so creamy and rich you just might gain a few pounds listening. This is one of the most radio-friendly collegiate albums I have heard in quite some time. If you like the style, this one's a keeper.

Simple and powerful arrangements keep these songs emotionally charged. The heartfelt intensity of each solo seems to invite the listener to believe in the place and mood of each song. These guys are genuine. For a group that released their first CD in January of 1998, this is a very impressive sophomore release. For listeners who worry that the "studio magic" may be more to credit than talent, I direct your attention to SNC's 2nd place victory in the National Championship of Collegiate A Cappella and feature story on CBS news. Of course that's not to say that Dave Weber's golden-ear mixing and recording don't deserve the special credit and thanks that SNC rightly give them. The strong production on this album does just what it should: it highlights the group's talents.

Last Call is so groove-ridden, it may just bust some preconceived notions of the straight-laced Midwest. What do they feed these guys out there? It's no wonder Straight No Chaser has received Indiana University's official sponsorship. I already prefer many of SNC's performances and arrangements to the original artists' versions. That's quite an accomplishment. Listen up R&B fans: buy and enjoy.

This group has to be considered one of the hot success stories of college a cappella. According to it's liner notes, some of the original members were still part of it, and was only two years old at the time of recording. Since that time, they were the runner-up at the NCCA's, they achieved sponsorship by Indiana U's alumni association, and they were a feature story on CBS news. By what I heard here, I can see why. And the fact that they did this in two years astounds me.

The feeling and vibe I get here is that they don't picture themselves as collegiate..and if I never heard the words Indiana University in here, I would have thought them to be a really good professional group for two reasons. One, they're really good. Two, they're individually miked. As any pro group can tell you, there's a world of difference between how a group makes music singly miked and when they aren't. And SNC uses their experience there to the hilt.

They hit the ground running with This Is How We Do It, and it grooves well. Tasteful percussion, a full sound, and a convincing lead.. hey, that's all I ever ask for in a cappella. =) From there, their song choices are very eclectic but always seem to make sense...they cover Jamiroquai. They cover Van Morrison. They cover Disney. They cover the Beatles. Heck, they even cover other college groups. And in most to all cases, they at least do the artist justice...in others, they surpass it. (IMHO, SNC show the VG's how it's done on Insominac) They did a really good job of mixing their repertoire so that the suits at corporate/alum functions and the students at their concerts would feel equally at home and enjoy what they're hearing.

If I had anything to nitpick about, is that their forays into R & B come off a little squarish...as if to remind me I'm listening to a group of nice, midwestern boys. =) Overall, though, this group is incredible, and I fully recommend this effort.

Yeah, I know that SNC placed second at the NCCA last year. I know that they won their regional. Yet I had a really hard time getting past the fact that they have a history that dates back to roughly the mid-90s. I had a hard time with the fact that they are from the a cappella capital of the world — Indiana (???). And I had a hard time with the fact that a group of predominantly white college students pictured in tuxedos and khakis in their CD packaging would choose what would seem to be a heavily R&B flavored repertoire for their first album.

Serves me right for judging a book, er...CD by its cover. Right from the very first track, this is a tight CD. Direction and focus just blew me away. I'm not an R&B fan, it doesn't figure to be a large part of my collection. Yet EVERY track just seems to ooze gold. Even the songs that aren't excellent are still very, very good.

All groups should take note: the vocal percussion is NOT center stage here. It's part of the meal, but it's not the main course. Lack of ear-splitting VP allowed for a full appreciation of Danny Ponce's and Walter Shilanskas's outstanding creative arrangements. I only wish they hadn't done a transcription of Insomniac from the Virginia Gentlemen's version, which can be found on BOCA 2.

As I write this, the CARA nominations have not been announced yet...this album better be nominated for many, MANY awards. The Brown Derbies swept last year for Nightcap, and this album far outshines Nightcap in every way.

To single anything else out on this CD would do a disservice to the rest of the CD. I'll leave it at this: Guys, you done good; everyone else, why haven't you bought this CD yet?

For current ordering information, visit Straight No Chaser's web site, or write to