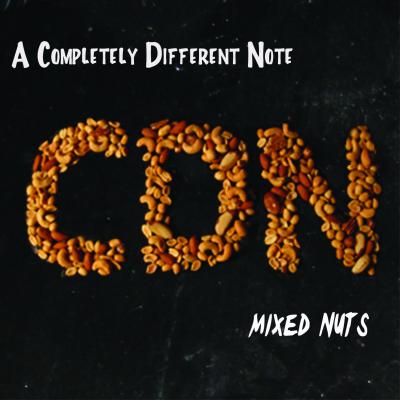 The gentlemen of UConn's A Completely Different Note describe themselves thusly in the liner notes to their latest CD Mixed Nuts: "With in-house arrangements and the occasional deviance from contemporary college genres, CDN has a sound that is fresh to both the experienced and novice listener."

I'm afraid I have to take some issue with this assessment. CDN's sound is certainly not going to be "fresh" to an experienced listener, and even for a novice, I daresay CDN may confirm more age-old stereotypes about collegiate a cappella than it will contradict. Mixed Nuts is a decidedly mixed bag, offering a few too many milquetoast, borderline cheesy versions of pop tunes that would perhaps feel more at home in a glee club. Indeed, the further CDN moves from contemporary a cappella, the better the group's music.

To be fair, the album sounds bright, clean and polished, for which CDN undoubtedly owes no small debt of gratitude to the folks at Liquid 5th Productions. It certainly sounds as though autotune has been applied liberally and VP effects/sampling and/or an octaved bass fill out quite a few arrangements which, absent them, would sound even more simplistic and uninteresting than they do already.

And there are a few moments where CDN provides a fleeting aural glimpse of what sort of contemporary group it could be if their arrangements added another layer of sophistication and their singing could escape the more formal, trained, at times Broadway sound that confines them now. Counting Crows' Round Here has a lovely, detailed ("out-of-house") arrangement from Nick Lyons and an intense, raw, unafraid solo from Miheer Sane — attitudes that one wishes were more present throughout the CD. Yet far too often, we get tracks like the sing-songy, wildly under-tempo opening track (One Week) and the Chili Peppers-Lite FM sound of Under the Bridge (complete with a ringing "major" ending that smacks of top hat and cane), both of which had me shaking my head in disbelief (and not in a good way).

Then again, perhaps CDN shouldn't be in any hurry to sound contemporary, for it's when these gents go "old school" that they shine the brightest. Irish Lullaby is absolutely lovely and Shenandoah is positively exquisite, featuring an opening countertenor solo by Jordan England that is breathtaking, even for a former glee clubber like me who has heard and/or sung this song dozens of times.

Maybe that "occasional deviance from contemporary a cappella genres" by which CDN defines itself should become more of a regular thing. From the only sporadic excellence of Mixed Nuts, it could make for a far more compelling album.

If there were an award for "most unintentionally ironic group name and album title", A Completely Different Note's Mixed Nuts would be a strong contender. This album is precisely undifferent, a compendium of standard male a cappella, rehashed with few updates or twists.

One look at the track list was enough to make me sigh. These men from UConn manage to cover an overdone song from many different eras, from the traditional Shenandoah to the recently popular Gone. While arrangements are decent at capturing the feel of the originals, I couldn't get past the lack of anything new or compelling about the material or how it is presented. One of my favorite arrangements was Under the Bridge, especially the penultimate measures that really catapult the song into its final chords. Unfortunately, such moments of excitement are the exception rather than the rule.

Singing is so-so. Pitch and blend in the block are tight, but often so heavily processed that Mixed Nuts doesn't sound like voices. Overall, the mix is top-heavy, tinny and thin. Bass is nearly non-existent, and the sparkly, punchy, too-tenory mix started to grate on me after a while. A few nice effects, especially guitar solos, add some flair throughout, but overall the album felt detached and staid.

A Completely Different Note needs the most improvement in regards to soloists. Almost every track's soloist sounds young, whiny, and petulant. Of course, it doesn't help that many of the soloists on the originals sound whiny and petulant as well, but more emotional and vocal depth would have served Mixed Nuts well.

A highlight for me was A Completely Different Note's exceptional countertenors. Shenandoah especially shows off some great high-register singing from several different members, complemented with some nice reverb. Perhaps I'm just a sucker for beautiful, pure vocals, but I found the counter-tenor trio the most interesting part of the entire album.

Mixed Nuts features mediocre singing and mediocre material, and is quintessentially a yearbook album: fun for family and friends but a snooze for the rest of us. A Completely Different Note needs some serious work before anyone else will start paying attention.

On their website, the men of A Completely Different Note pride themselves on having "the talent to fill a concert with musical flavors for everyone to enjoy." Unfortunately, unless vanilla is your favorite flavor, I'm afraid there isn't much on their latest album, Mixed Nuts, to get excited about. It's a pretty bland piece of work overall. Almost everything about this album sounds very average compared to the rest of what's out there today. There are a few moments that hint at possible good things to come, but the men of CDN have some work to do before their recorded sound is going to turn heads.

Simply put, this album on the whole lacks the energy and creativity that might have kicked it to the next level. It doesn't help that track one (the Barenaked Ladies' One Week) is probably the weakest on the album. The soloist's rhythm and pitch are all over the place in a poor attempt to capture Steven Page's signature delivery. The group doesn't give him any help, as they sound lifeless and generally not locked into the groove. A start like that does no favors for this album as a whole.

It would be easier to forgive such a weak start if things improved from there. Sadly, they do not. I can't figure out why a group who so actively advertises their musical diversity and the fact that they sing things "completely different from any other a cappella group" would release an album that begins with One Week, Under the Bridge, and a Journey Medley! Add those to the later appearances of Lady Madonna, Fat Bottomed Girls and Ben Folds' Gone and you've got an album of mostly standard contemporary a cappella covers; most of which are arranged as transcriptions without any distinction or special creativity. Where's the originality?

Luckily there are a few sprinkles of interest on this vanilla sundae in the form of Irish Lullaby and the much RARBed about Shenandoah. Neither one adds much in terms of creativity to the bulk of what is already out there, but there is very little to fault in CDN's delivery of these classic tunes. The countertenor solo at the beginning of Shenandoah is indeed beautiful. Unlike the pop music on the album, which often sounds awkward and forced, the choral music is actually well phrased and beautiful. I found myself wishing that the guys could have applied some more of this musicality to the rock tunes. It would have made for a much more interesting album.

With all of the buzz about CDN I have to confess that I was expecting something much more from these guys. This isn't a terrible recording, but there is precious little here to distinguish it from any album made by Male Group X within the last few years. While I applaud this group for turning in some solid choral work, they're going to need to take a few more chances with their contemporary repertoire, as well as pump up the energy the next time around if they want to make it to the next level.