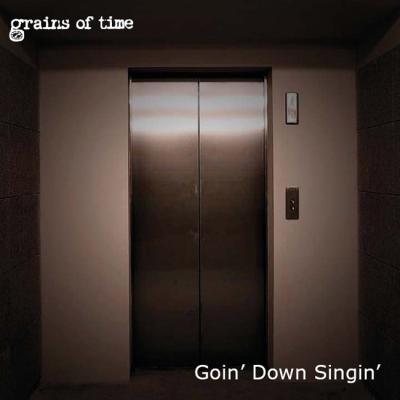 North Carolina certainly has a well deserved reputation for being chock-full of terrific collegiate a cappella and as very likely one of the oldest scholastic groups in the state (at 40 years), NCSU's Grains of Time has certainly had sufficient time to join those ranks. Unfortunately, their latest album Goin' Down Singin' only demonstrates their ability to create solid, if uninspired and unimaginative music, what I would call "blah-cappella".

The ensemble singing is good enough and what isn't — most often the tenors when they venture toward the extreme high end — is well disguised in the slick production we've all come to expect from diovoce. Ditto for the group's blend, rumbling bass and crisp VP which clearly also owe a debt of gratitude to Dave Sperandio and company. Soloists are rarely better than okay, with the exception of several bits from George Gilliland (She's Out of My Life being his best) who demonstrates why he was invited to join Transit.

The trouble is that what the Grains are singing just ain't all that interesting. Oh sure, there is a wide variety of repertoire: from Red Hot Chili Peppers to Keith Urban to Barenaked Ladies to The Eagles — certainly not a dull set list. But the interpretations here are thoroughly mind-numbing most of the time. Most often, the VP is consistently well thought out and, together with an oft-octavized bass, you then have the bulk of the arrangement. Apart from the soloist, you might get a single unison rhythm in the background, or perhaps a sustained block chord. On rare occasions, perhaps there is a second rhythm or voice echo buried in the back of the mix, but on the whole, these are hyper-simplistic arrangements dressed up in fancy production but severely lacking in craft and creativity. Even the reliable, and frequently brilliant, [ed. RARB reviewer] Joseph Bates's work on this album is subpar on all but Hotel California where he deftly retains the feel of the original while adding a fair amount of funk. Indeed, it says something that the best arrangement on the album is Scott Leonard's take on House of the Rising Sun, which is carbon-copied excellently — both a compliment and a criticism.

Energy is another area in which the Grains come up short. Too much of this album just plods along — almost the "Lite FM" versions of the source material. Crazy is a good example, sounding more like a Bee Gees track dropped from the Saturday Night Fever soundtrack than the infectious Gnarls Barkley original. But Respect is the most egregious misfire — as milquetoast and nearly as corny by the end.

Truth be told, the group's choral roots may be a contributing factor here, as the members are all drawn from the NSCU choral ensembles. It can certainly be done, but it's also a challenge to sing choral music regularly and keep your edge. "Edge" is not something to be found on Goin' Down Singin' and without it, some markedly better arrangements, and a whole lot of Red Bull, the Grains will keep on sounding like one of the oldest groups in North Carolina.

The Glee Club and Barbershop Boys had one foot out the door on their former release True, having set out then to make a more contemporary a cappella album. They've fully exited the building with Goin' Down Singin', showcasing Grains who want to rock via Justin Timberlake, Gnarls Barkley, and the Red Hot Chili Peppers.

Goin' Down Singin' sounds entirely different than True, which fans will hear immediately through the heavy production and edgy tint on country opener Me and My Gang. However, this means it's now easy to compare the Grains to other all-male groups with similar styles and albums (and boy, there's a lot). Unfortunately, it does sound like the Grains will need another transition period before they can hop into the ring with national all-male favorites. Their mesh of styles and sounds was really unique before. Bands like the Orleans and the Four Seasons worked for the old Grains, a group sensitive to dynamics, groove, and being ridiculously charming. The new Grains sound is standard fare, with too many unmemorable arrangements stitching together Goin' Down Singin'.

The strongest tracks are those where the new production level and arrangement creativity merge to breathe fresh life into well covered tunes. What Goes Around.../...Comes Around has a dizzying amount of fun sounds and sexy vocals to listen to — JT just got played by the guys from NC State! The Eagles reappear on this Grains album with Hotel California. It's full, beautiful, strong, and atmospheric, creating a great last impression for Goin' Down Singin'. These two are amazing, thoughtfully executed pieces, and no other track comes close to the masterfulness they offer. But, nothing sounds too awry, either - just squarely in the "that was fine" arena. One exception is Aretha's Respect, an interesting arrangement for the risks it takes using a falsetto soloist, a deep bass soloist, and a mid-range tenor soloist, but going back and forth between the extreme leads sounds too jarring.

Goin' Down Singin' is a hit and miss effort. There are good ideas at work, however, leaving hope for continued refinements.

The rich, full body of the Grains of Time's sound confirms that even a relatively small collection of singers can produce a big sound, and that's mostly what you'll hear from their latest album, Goin' Down Singin'. Although some uninteresting arrangements and mismatched soloists prevent this from being a truly stellar body of work, the Grains's exceptional blend and clean, polished sound rise above today's standards.

Every track on this CD shines and glimmers with well tuned vocals and appropriate mixing. There's a fair amount of studio magic, guitar sound effects and all, but there are also enough "real voices" in the mix to get a sense of the group's character. The song choices are decidedly pop-heavy, covering radio artists such as Gnarls Barkley, Rascal Flatts, and 98 Degrees, to name a few, and most of them are executed effectively. The opening lick, Me and My Gang, is an appropriate introduction, with high-energy vocals and an attention-grabbing groove. The song also features red-hot frontman George Gilliland, who appears in five of the twelve tracks and outshines virtually all of Grains's other soloists. The group's excellent blend is most intensely showcased in the carefully sung She's Out of My Life, which features thoughtful phrasing and emotion, as well as some refreshing natural dynamics. The closing number, Hotel California, is the strongest track on the album, with an effective arrangement, a stellar solo performance by Gilliland, and a natural energy that rarely shows its head elsewhere on this record.

And it's a shame that the group's energy doesn't come through more often. Sure, the tracks offer some intensity, but it's mostly manufactured, because the phrases are largely stripped of dynamics and compressed until your ears bleed. The album also suffers from some boring, repetitive arrangements, which are treated with an extra dose of studio effects to help them carry their weight. What Goes Around... / ...Comes Around and Wine, Women, and Song are the worst offenders, the former because of long, uninteresting descants and the latter because of irritatingly persistent "bums" placed throughout. One thing about this album's production is clear: There's a negative relationship between the effectiveness of the arrangement and the use of post-production effects.

I also have to openly offer this suggestion to the Grains of Time: Make sure you have an appropriate and capable soloist before deciding on a song. Respect is a song that, especially for an all-male group, should be performed ONLY if you know you have the frontman for it. Having three singers jump three octaves is distracting and poor execution. And the lead on Bailamos can't really sustain the top notes of the chorus, nor can he convincingly speak (sing?) Spanish.

Regardless of these issues, Goin' Down Singin' is a well made album from beginning to end. The Grains of Time are musically sound and show plenty of promise. With more attention paid to arranging and solo technique, I trust that they are capable of producing some outstanding bodies of work.