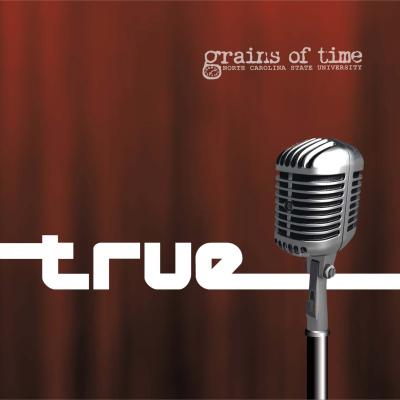 The last album from the Grains of Time, UNION, ran the spectrum of RARB reviewer scores of which I was at the bottom end. That fact combined with a few cranky RARB forum postings about my perspective made me resolve to give their latest effort True even greater scrutiny. I was also intrigued by the liner notes highlighting the addition of vocal percussion as an effort to move towards a more contemporary sound, a first in the group's nearly forty-year history. I was ready to be enlightened and enthralled.

The tension between where the Grains come from and where they want to go is epitomized in the opener This Love. A single bass opens the familiar hook with an almost cartoony sound, as tenors add chords with an old-time, doo-wop feel. I found myself staring in disbelief at my iTunes — a doo-wop version of Maroon 5 that kinda works! But the accord breaks down quickly, with wimpy backing vocals and sloppy syncopations carrying the day. And True is unfortunately marked by too many such moments of promise followed by inevitable disappointment.

Generally, the Grains are on solid footing when they can reach back to their glee club roots. I'll Be Seeing You has some lovely harmonies and nice falsetto work at the close of the track. Nat King Cole's L-O-V-E is also consistently strong (putting aside the grating attempt to reproduce a muted brass solo over the bridge). And the choral background of the singers works well on the smooth, shimmering Making Memories of Us. Throw in an energetic Still the One that brims with personality and a cute mashup of the mechanized "Oh what a night"s of December 1963 over Ladies' Night, and the evidence seems clear. These boys can really sing ...

... sometimes. Sleepy ballads Love Will Keep Us Alive and Right Here Waiting lack the emotion necessary to transcend filler status. The group turns in nice support work on Rockapella's People Change that the soloist then squanders with significant tuning and phrasing issues. Sittin' Waitin' Wishin' has a minimalist approach that might capture Jack Johnson's folky intimacy if the group weren't so sloppy with their entrances and cutoffs (a prim, proper solo throwing vibrato all over the place didn't help either). And Refuge is just a poorly tuned misstep from first beat to finish; it's hard to believe the same group produced all these tracks. Though True is more cohesive as an album than UNION, the inconsistent singing dooms it to a similar fate in this listener's esteem.

By the time you read this, a brand new generation of Grains will have taken up the torch; the entire roster that recorded True turned over in one year, in what would undoubtedly be a brutal blow to any collegiate group. Here's hoping the new class fulfills the intent of their predecessors in taking the Grains to the next level.

I really liked the Grains of Time's previous release, UNION. A little barbershoppy, a little doo-woppy glee clubness; it was the right style of music for me, with a delightful range of genres that was just within the capability of the group's collective talents. Its lack of vocal percussion and crackerjack soloists pretty much did it for me. In almost a complete 180, True employs more gimmicks than a used-car salesman. Weird, nearly ear-bending production choices leave me absolutely confounded as to how to respond.

Stylistically, True is all over the place and not in the good way that UNION did for me. It's almost as if the group turnover left the Grains with a bunch of second-rate performers who spend more time in the studio than in rehearsal. I just don't get it. This Love has a mismatched tempo from the very beginning, opening with Maroon 5's signature twang that lands on the quarter note instead of being syncopated. It pretty much falls apart from there. A strange R&B bass speaking some of the words under the solo, blend just about absent from the multi-tracking, and the background using lyrics as syllables in a very barbershop sound are just some of the faulty choices that pervade the first song along. I can't understand the choice of putting four slow, dragging songs so close to each other so early in the album between tracks three and six, and the oddly-blended, muddled I'll Be Seeing You barbershop piece that actually appears between the doo-wop More Than a Number and simplistic, silly L-O-V-E.

Later on, there's not enough distortion in the production to deter the listener's focus from the boring tenor backgrounds and less than stellar soloists. Songs that should be carried by the lead vocals (Sittin' Waitin' Wishin' and People Change) are just not engaging, and even less so with their dull, uninventive arrangements. Energy level is at a significantly lower level than I'd have expected, and especially after three years of work since the group's previous album. On top of this, Nathaniel Harris is not at all convincing on most of the four tracks he leads. His voice, underdeveloped and unenergetic, does not command attention the way a vocalist should.

In all fairness, there are a few songs that perk up, and they're probably not what you'd expect. Love Will Keep Us Alive, though not by any means an excellent track, utilizes a more traditional arrangement style for ballads that at the least employs more standard, tried-and-true methods that will be familiar to a cappella listeners. And Mack Hedrick executes a decent performance soloing on John Legend's Refuge supported by James Wallace's VP, which appears on all twelve of True's tracks.

I could chalk up True as a yearbook album and ask them to do better next time. But after a 38-year history and 12 studio records, to produce such a mishmoshed, disjointed, and least of all, unpolished album is just sad. Their desire to grow, to take a "decisive step toward the contemporary a cappella collegiate a cappella sound", was admirable but far from successful. I'd have preferred the group stick to the raw, more solid, and way more comfortable glee club sound that had worked for them for so many years. A less-than-fond departure for NC State's all-male ensemble.

Grains of Time has made musicianship its priority. Attention to dynamics, line shaping, passionate deliveries, and a sensitive, tight blend is always present. The group sounds rock solid. The vocal percussion is outstanding. The soloists, however, are sometimes thin, sometimes shaky. If this area is improved, Grains of Time would be a force to be reckoned with.

All the same, True is a wonderful listen. Grains of Time has successfully transitioned to the contemporary a cappella scene. Fresh, upbeat This Love opens True, and lingers with its catchy, playful writing. Complex but always clean vocal percussion is heard that keeps its high standard from start to finish on True. James Wallace is my new mouth drummer hero. We also hear delightful tenors, whose warmth carries through to create a pleasant mood for the duration of the album. As True moves along, it's clear that ballads, like Love Will Keep Us Alive and Right Here Waiting, really showcase Grains of Time's expressive musicianship, and upbeat songs like Still the One and More Than a Number are absolutely impossible to not sing along with.

In a throwback to their Glee Club and Barbershop foundation, a very choral I'll Be Seeing You and old-fashioned L-O-V-E appear on True. Normally this severe transition would bother me, but the guys make it so refreshing that it's really enjoyable. The only change I would suggest to the lineup would be switching the last two tracks, since funky Ladies Night is a stronger closer than a soft Right Here Waiting.

There's a lot of talent here. I'd say these guys have left everything in place to make a spectacular follow-up to True.