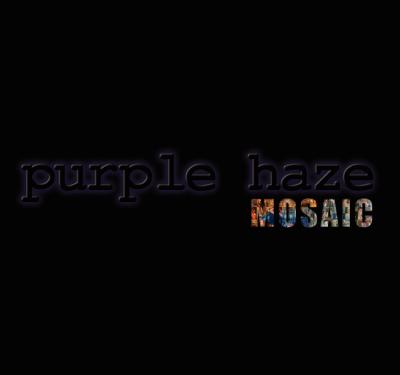 Purple is in this season.

Purple Haze's greatest strength is its unified group sound. Is there an a cappella album out there with more natural dynamics than Mosaic? Purple Haze's continuous pushes and pulls really underscore the concept of what one can do without instruments. Combined with remarkable intonation and mature voices, Purple Haze is a standout collegiate group.

While the group sounds keenly aware and focused, the big prize is soloist Catherine Brookman. This gal left crowds breathless during the live version of Samson in the 2008 ICCAs. The song is even more effective recorded, as we hear each tiny detail Catherine breathes into it for an absolutely spine-tingling rendition of Regina Spektor's masterwork. Add Catherine's powerhouse vocals on Heartbreaker, and it's clear that there will be a "Catherine Brookman era" in Purple Haze's history.

Holding Mosaic back from reaching the next level are the dashes of monotony present on the album. The group always works hard to entertain, delivering the classics and unknowns with great confidence. The sound production is always thoughtful, especially on glossy Only You and rowdy Call Me When You're Sober. But a combination of occasional mediocre arranging and weak song selection slows Mosaic down. Get Gone and Your Face are much duller than the other songs on the album. They pull the listener out of the pleasant Purple Haze groove. And while Tearin' Up My Heart sounds pretty darn good for a standard boy band cover, the transition into Bye Bye Bye is jarring, with the second song sinking in comparison.

However, the excellent musicianship makes Mosaic a memorable album that's worthy of your attention. Purple Haze certainly sings at a level beyond their years, and with a refined track list, they can dominate in the collegiate a cappella realm.

Fresh off their success in the 2008 ICCAs, Northwestern's Purple Haze is back. Newly teamed with Bill Hare, the group has created an album that is solidly above average with moments of excellence sprinkled here and there. Yet to be honest, there's nothing here that really impressed me. There are a lot of cool moments and a fair number of interesting artistic choices; two things that elevate Purple Haze to a level clearly above average. Still, they're not quite superstars.

The main culprit is the track list. Too many bland, overdone songs prevent the listener from getting much of a sense of style from the group. The arrangements and soloists are generally good, which is ultimately what saves this album, but the material being covering just isn't that exciting.

Next time around I would suggest that Purple Haze be a little pickier about which tracks wind up on the final album. Besides being loaded with many dull song choices, this album is also simply too long. Fourteen tracks is a lot these days, and I think this recording would have benefited a lot from being trimmed to include only the best tunes. Making Mosaic a leaner set of ten or eleven songs would have allowed time to refine the remaining music, resulting in a higher quality album across the board. For the record I would have cut Canned Heat, Get Gone, and Call Me When You're Sober on account of lackluster soloists, and Hide and Seek on account of the facts that it's incredibly overdone and this version brings nothing new to the table.

With that out of the way, let's focus on the good, shall we? When I mentioned that there were cool artistic decisions I was referring to things like Catherine Brookman's gospel-laced take on Regina Spektor's Samson, a different choice that saves the song from being just another cover. Similarly, well textured arranging provides interest on this album where the songs offer little themselves. It's also worth noting that the aforementioned soloist for Canned Heat, Janelle Kroll, turns in a much better and more soulful lead on the bonus track Everybody's Free.

It's pretty clear that Purple Haze has the talent to be as impressive in the studio as they are on the stage. If they can be a bit more discerning with their track list, I think their next effort could be exceptional.

Purple Haze is an a cappella group from Northwestern University that apparently contained 18 members in its 2007-2008 incarnation. 18 members ... wow, that's a large collegiate a cappella group. Mosaic is their latest album, and it's a respectable effort, though somewhat forgettable when all is said and done.

There were several excellent soloists on the album. Catherine Brookman made Samson come alive (she was also the arranger). Vic Mazzone did a lot of things well in Only You, and had an interesting tone of voice. Morgan Karr brought a lot of energy to Good Day, which was also by far the best arrangement of any of the songs (the arranger Devin DeSantis is a former member of the group). A catchy tune always helps! Brookman also did a very good job on Heartbreaker. And probably the best solo was Carly Kincannon on Call Me When You're Sober; she really nailed it.

One thing that perplexed me was the number of abrupt endings to songs. I counted five songs that ended strangely: Samson, Canned Heat, Heartbreaker, Life is a Highway, and Tearin' Up My Heart/Bye Bye Bye. I couldn't figure out what was going on.

Two of the tracks are songs I've heard covered by other groups. Unfortunately, in both cases I liked the other group's version better. Purple Haze's Rhythm Nation seemed a lot more rigid and inflexible than did Mosaic Whispers's version (from BOCA 2002), and consequently lost a lot of energy in the interpretation. Purple Haze's Hide and Seek was much more abrupt at the beginning than was the Rice Philharmonics' version (from Phils So Good), often feeling like they were chopping off the end of words. Purple Haze's version also had much more manipulated voices than did the Philharmonics', perhaps something that contributed to my overall feeling that the Philharmonics' version displayed more artistry.

Speaking of artistry, my lowest scores for individual tracks were given more for artistic flaws than for musical flaws — some of the tracks broke the First Commandment of performance: "Thou shalt not be boring.". At times I wondered "What's the point? Why are they singing this?". And one song, Everybody's Free, just plain confused me with its strange juxtaposition of traditional choral block chords with a soloist who attempts to put a Mariah Carey spin on the melody. Didn't work for me.

Lastly, be warned that Get Gone contains both the "s" word and the "f" word.

In conclusion, the album had good moments, but I don't think I'll be listening to it very much a few months from now.