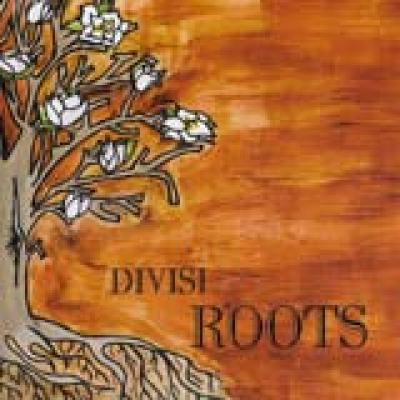 Roots shimmers, pouring forth sparkly sound that fills up all the spaces. Divisi pours this timbre over all the songs in this collection, soaking them thoroughly and mostly successfully.

Hide and Seek is the best, taking the by-now familiar perfected block chords and overlaying them with a smile. For Divisi, the song is warm, soulful and filled with promise, instead of an ache for promise that used to be but isn't any more. I'm not sure what inspired them to sing it this way, but I like it, and I like this song where I've never cared for it before.

Elsewhere, the Divisi sound impresses but doesn't always breathe. In some of these songs, I appreciated the arrangements, admired the performance, applauded the engineering and angled for the exits. There's no emptiness, no pause in this music. Fine, I guess — this is not acoustic music, after all — but I ached for it nonetheless. I felt like the edges had mostly been sanded off, or left on for theatrical effect as on the slightly hokey You Had Me or the Lady Marmalade-esque reinvention of Light My Fire. In some songs, like The Walk, I fell in step with the ambiance. Elsewhere, I wanted a little more barroom growl, a little less reverb. Somehow I think that reflects more upon me than upon Divisi.

Truth No. 2 is one of the songs that could have used more lift. It sounds great — really everything on Roots sounds pretty good — and the instrumental break is vocally crafted and excellently performed. But on the verses — I wanted more range, more space, more folk music. What can I say, I'm one of the folk. Love Will Come to You has hints of this, in the first chorus, and first duet, but it's not a strong song overall and the effect doesn't carry through. The Calypso swing of Don't You Worry Bout a Thing comes closer, perhaps, though it also benefits from a heavy dose of '70s shimmer.

One thing this album makes clear — women can make a really good record all by themselves, no question. The singing, production, sound and arranging on this record are all top class. You never feel the lack of male singers — in fact, I was often relieved at their absence, as if men would have weighed this album down and kept it from reaching such heights. I attribute this to this group's good choices, of what to sing and who to work with.

So Are You To Me ends the album sweetly, even chorally, without letting go of the pop sensibility at the heart of this album. Roots grows from quite a foundation.

University of Oregon's Divisi has established itself as a group worthy of notice in the collegiate a cappella circles. It's hard to believe they began that journey in 2001. Perhaps one part of the recipe for the group's success is its mission: "to create provocative and meaningful art while continually pushing the limits of contemporary a cappella." It's this fearless mission statement that powers the engine of Divisi's (partially hired) creative arrangements (Deke Sharon, Joseph Bates, Tom Anderson) and well-rehearsed musicality. These elements, when added to the talents of recorder/producer/editor Peter Hollens, editor Ed Boyer, mixer/master(er) Bill Hare and even some VP programming from Tat Tong make for an album that can't help but rise above average.

Above average, it is. Truly provocative or boundary pushing, it is not. Like almost every group, it's a collection of covers, most well-known, most well-sung. But all within the boundaries of expectation. But there are some superstars.

The Walk stands out as a near perfect combination of arranging, studio trickery and raw vocal talent. Rarely does a group capture power of an original, much less the dynamic quality of an artist like Imogen Heap. The Walk does this with an excellent lead (Molly Richardson), studio perfection and some of the best backups I've heard from a collegiate group.

For the purists,Roots includes a version of Imogen Heap's Hide and Seek with all of electronic vocoder-harmonizer effect removed. Its new, organic quality is surprisingly compelling, a testament to Divisi's excellent musicality.

My least favorite track has to be Light My Fire. I do compliment Sarah Klein's initial choice to arrange aggressively — the song demands it — but the result here just sounds likes a choreographed cat-fight. It's funny, but funny doesn't serve the song. The studio effects don't help a bit and even tend to exaggerate the problems. I bet that an energetic, tongue-in-cheek delivery wins crowds live, but despite a very energetic studio delivery by Lisa Forkish, it sounds like a total mess recorded. It's a creative idea that just didn't work.

For listeners who miss the sweetness that a cappella groups of the "fairer sex" were once so known for, Divisi eases your withdrawal symptoms with Let That Be Enough Love Will Come to You and So Are You To Me — all gentle, sweeping, feminine and lovely.

Mama Who Bore Me probably encapsulates all that I love and much of what I don't in Divisi. Molly Richardson's lead over the gospel-like chords and wicked VP programming at the song's finish is simply triumphant. You'll be moved to tears. You'll want to give it a standing ovation. That alone is a rare achievement in collegiate a cappella, but let's Tarantino this. Let's go back.

The soprano "doo"s at the opening compete a little bit with the lead in the mix, but this opens to some warmer "ahh"s, so that's not that big a deal. The "doh doo day doo" is distracting because it's just so well enunciated. The performance demands that the listener pay attention to these nonsense syllables. How does that help the mood of the song?

The next section kicks off with "Joan Jett" as a featured background syllable. It's undeniably clever to use an old rocker's name to provide a rockin' texture. But nonetheless, the listener is again pulled out of the artistry of the song, pulled out of the experience the lead singer is trying so hard to create and now we're in that ironic-winking-deconstructionist place. It's a moment of "Hey, get the joke? Joan Jett! Get it?". Does that work? Somewhat. It works on an amateur level. It's no longer truly nonsense, but neither does it serve the mood of the song. It takes a genuine "5" and (along with the other distractions) makes it into a "4".

These may seem nitpicky details, but music, like football, can be a game of inches.

Divisi's Roots has a great deal to recommend it. The scores speak for themselves. Fans will adore the album. Divisi's reputation among the collegiate a cappella powerhouses remains strong. But if Divisi actually kept all of its musicality and really did break boundaries as their mission statement urges, the result from this group of talented, hardworking singers could be timeless.

Paying homage to the 27 voices that have founded and carried forth Divisi, Roots offers a nice selection of a cappella songs performed in a dominant, let's-blow-the-shingles-off-the-roof style that really befits these talented singers. If you want to hear some of the best female a cappella around, Roots is your answer.

Though no one track is as ridiculously necessary as Yeah from Undivided, there are several works on Roots that accomplish greatness. Truth No. 2 marks the very first time I've heard a country cover really succeed in the a cappella realm. Everything is just right here — the arrangement, the energy, the interpretation, and Haley Steinberger's strong lead that conveys "I can really sing this!" instead of the usual "I'll throw in some twang and squeaks and see what happens." It's completely brilliant. Mama Who Bore Me also shows off the depths of Divisi's talent. When the group transitions from a beautiful ballad to a funky hip-hop style, it's magic. These tracks, combined with the absence of any one weak track on this album, puts Roots in a great spot for lasting inspiration and enjoyment play after play. From punchy You Had Me all the way to the hold-your-breath closer So Are You Are To Me, it's all solid.

But as with Undivided, there's still the feeling that the percussion, in particular, is over-worked. Is it even necessary to list individual vocal percussionists for each track when the beats are this produced? While many groups follow a similar suit with their treatment of vocal percussion, I feel Divisi is far too talented to hand over the reins so completely to engineering. If the percussionists are as good as the vocal leads (and I suspect they are), a gentle enhancement instead of a full creation would take the listener reaction to new heights.

Even with the engineering decisions, Roots stands out as a very thoughtful, very emotional, very fine album that belongs in your collection.