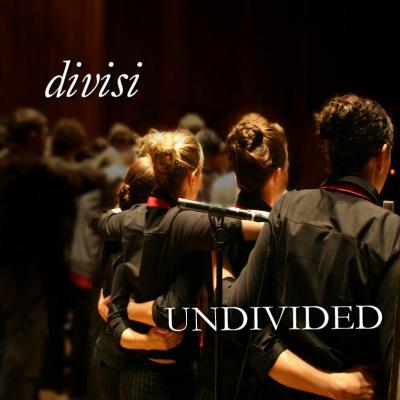 Divisi has produced a nice clean album that periodically stretches into something truly remarkable in Undivided, the latest effort from one of the better known all-female college groups. Most of the disk is good but almost grating, off-putting in a way that is hard to define but keeps listeners at a distance. Only a few songs have enough energy or attitude to draw the audience in.

Original songs are a highlight of this disk. Here to Stay has an infectious energy that taps into the '80s without channelling them. It was one of my favorite tracks, along with their performance on the Deke Sharon arrangement of Shadowboxer. The other original, Solid Ground, isn't as compelling but it has promise and also shows the group in a good light. As both originals demonstrate, Divisi members have a good grasp of basic songwriting as well as the trims and garnish of a cappella pop. In general, the arrangements are pretty good but not spectacular, as are the soloists. Also, Divisi is big on medleys. As these things go, they are generally pretty graceful about it, but I have aged into a "less is more" take on cover songs. The Imagine breakdown, for example, riffs a little too long down the yellow brick road. Imagine embodies some of the contradictions that make this album hard to write about. It starts off with a simple, average-sounding arrangement, picks up some really nice sounding chords, effectively shifts from low to high registers and back, then veers off into this 12-song medley reference before circling around to more or less where it started. Skillful? Yes. Bad? No. Do I like it? Not really. But I'm not sure if it's me or them or some of both.

There's a slight earnestness to Divisi, which tends to express itself in a rapid vibrato that is well managed but nevertheless crops up throughout the album. Maybe that's what's keeping me at a distance - I welcomed the edges around the Since U Been Gone arrangement and the audacious vocal electronica of the album-closing Yeah. Some listeners out there are probably going to adore this album. Alas, I'm not one of them, despite not really being able to explain why.

Starting off with some power vocals, Divisi sets the tone by setting themselves apart from stereotypical notions of an angelic group of lady-like carolers. Divisi, as they say in the poker world, has the nuts. It's a good thing they can sing their little butts off too, because the song selections are pretty tired: most of the songs have been covered to death for decades and a good portion of the others have a torch song cheesiness. But the arrangements are generally sassy and harmonically full, and the voices are tight. So, out goes the "I've heard it all before" and in comes "Yeah, the party's just getting started". That and a great energy make this a more enjoyable CD than it might otherwise have been.

It helps Divisi to have solid production from start to finish, giving each track the shiny specialness that leaves unfunded releases in the dust. VP and "bass" get the biggest enhancements, but the producers get a strong voice in presenting the upper voices as well. The results are all first rate.

While some women's groups choose an ethereal tone, Divisi uses this color sparingly. Instead they often opt for a rich, belty core (Queen of the Night, Walking on Broken Glass, Shadowboxer, Solid Ground etc.). It's a choice that keeps the sound strong and grounded. On Hello the variation from this formula yields a touchingly sensitive lead. Yet, on Dreams the classically trained, heady tone of the lead sounds out of place and uncomfortable with the demands of pop music.

Imagineis a daring reinvention of John Lennon's classic. But daring as it was, it didn't work for me. I respect the innovative approach nonetheless. The song is primarily treated as a pop-informed choral piece with a sampling of quotes from some well-known and distantly related pop songs. Here though, I liked the idea better than the execution. Try as I might, "Over the Rainbow", regardless of how well it's sung, just didn't add to Mr. Lennon's classic.

Sunday Morning is what I'd like to hear a lot more of in the land of XX-chromosome-a cappella: hot and surprisingly sexy lead, groovy beat, and some sweet changes between rock and acid swing. I could have done without the Stevie Wonder quote and the pasted percussion and jazz chord ending just kind of falls apart. But until that part, Divisi had me bopping along.

Speaking of getting my dance on ... Only on the dance floor triumph Yeah does Divisi not only crank it up but also keep it going start to finish. Some great production doesn't hurt either.

And that's Undivided in a nutshell. There's so much good here that listeners are sure to be drawn in. But something goes a little awry for me song after song to keep scores a bit lower than I'd have liked. Still, in many ways, this is one of the best collegiate female a cappella groups out there today.

Here's the thing about Divisi: they have very, very big voices. There is gusto, and oomph, and a tremendous amount of vibrato, and an overall style that often turned Undivided into "Divisi: The Musical". The style can be quite striking, but sometimes it's just inappropriate. Their maturity and force certainly adds depth on the serious numbers like Shadowboxer and Hello, but makes the simpler pop offerings a little comically serious. An additional problem comes from the rhythm: the Divisi drum is frequently too loud, too synthetic, and too basic. Particularly bad offenders include the work on Walking on Broken Glass, Sunday Morning, and Since U Been Gone, where the harsh drum production overpowers the soloists and offers nothing but distraction. In a group where every voice is a standout, there's just no room for internal competition.

That said, there were two numbers on Undivided that made me wish I lived in Oregon again so I could revel in live performances every chance I could. Imagine is a startlingly unique and gorgeous take on the original. There is such precision, and such a perfect balance between high and low voices with an ending that will send a chill down your spine. But the real showstopper is Yeah, an explosive, over-the-top, packed-with-attitude number that could make Usher himself overcome with awe and respect. It's slick, it's sassy, it's goofy yet commanding ... it's probably the best thing to ever happen to women's a cappella. I also appreciated the original numbers — Solid Ground for its growth and passion, and Here to Stay for its energy and lovely soloist Suzie Day.

It's clear that Divisi is both talented and spirited, but their music won't sit well with everyone. I would love to hear a razor-sharp, edgy style that can only happen when vibrato is tamed and choral singing forgotten. But this is my preference, and it may not be Divisi's.

To order, visit the group's web site or email the group.