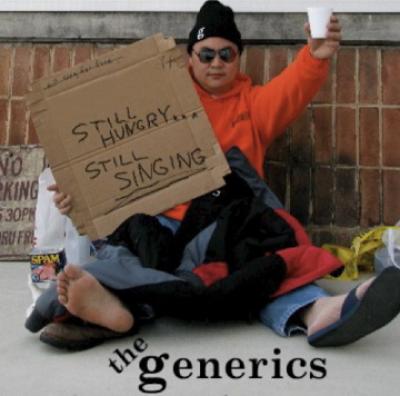 Still Hungry, Still Singing is really two separate albums. Liquid 5th produced tracks 1-6 and 10 and they sound at least good, if not darn good. Blue House Productions produced tracks 7-9 and these tracks do not sound good.

Starting with the Liquid 5th venture, there is much to commend and little to gripe about. Happy energy abounds, and there is a lot to be proud of. Soloist Brian Merritt is a stand-out on Still Hungry, Still Singing, delivering three very strong leads. Brian's best work is on Queen's Crazy Little Thing Called Love, where his command and flair is red hot. Song selection is commendable, with Geek in the Pink and Future Love Paradise serving as perfect bookends. Both tracks offer much to listen to, with well crafted production; in a word, sweet. The only problem on the Liquid 5th line-up is found on Sir Duke. The song brims with joy and catchiness and one delightful lead from Jordan Mills until lengthy and weak scatting bursts in on two separate occasions. It's really odd, and no amount of re-listening softens the strangeness. Still, that's not much to complain about.

However, one needs a legend to make sense of infamous tracks 7-9 (Beautiful Disaster, Put Your Records On, and Uptown Girl). They not only sound poor, they're listed in the wrong order on the jewel case and liner notes. Thankfully the wrongness is consistent, or we'd have to get a legend for the legend. Intonation is the real killer, and parts of each track are painful to hear (but I have to give Uptown Girl a decent score because "PNUT" sings the crap out of it). The production on these three is minimal, a stark contrast to the rest of the album, and certainly offers no help when the group starts to slide in pitch. Really, these three songs are one step up from a live performance, and shines a huge spotlight on both the group's problems and the capabilities of this studio. What the heck happened?

So, Still Hungry, Still Singing is the ultimate mixed bag. Can't recommend it for the inconsistencies, I but hope you'll enjoy the bright spots.

Note to the Generics. If you are reading this and the person who was responsible for getting the track list out of order is in the room, throw something at him. If he's the same guy who was responsible for the scat solo on Sir Duke, all the better. Still Hungry, Still Singing is a top-notch album marred by a series of unconscionable blunders that detract from its overall impact.

Take Crazy. Contrary to recent trends in Gnarls Barkley covering, this version is well-considered. A creative arrangement buoys a soloist (referred to only as "Fak") who has the chops and the nuance to deliver the goods. Alas, the tempo rushes, and poor Fak is left playing catch-up at the expense of the song's central groove. It's a shame too, because this is the first cover that actually nails the song's crucial bridge.

Uptown Girl hits all the right metaphorical notes. Unfortunately, soloist "PNUT" has a tendency to (just) miss the printed ones. I refuse to believe that the Generics don't have access to artificial tuning mechanisms. Why make PNUT dive without a safety net here?

And, off-topic, but who is PNUT? None of the listed group members has a name that lends itself to the shorthand. There are no Patrick Nuttinghams in the group. Does this fellow look like a peanut? If so, why not just call him "Peanut"? Gangsterizing the moniker doesn't make it any more hard core. Maybe it's pronounced "Newt"?

And, yeah, that scat solo. Who okayed that? Granted, this is one of those kitchen sink covers designed to show off and close sets, and it mostly succeeds anyway, but still... The good people at Liquid 5th do the same thing producers always do with bad collegiate scat solos, slapping a filter on it and sending it out the door. They caught the error, but why didn't anyone cut it out entirely?

All of which brings me to my point. The Generics can sing. They can also arrange. They also apparently know tasteful production when they see it. By and large, this is a great album. Brian Merritt (who is not PNUT or Fak) turns in three outstanding solos, including a courageously straight-laced version of Put Your Records On (which is track 8, not track 9 as listed on the printed album notes).

Future Love Paradise is a revelation. The tendency is to over sing Seal, but soloist Kevin Meyer stays grounded as the well-orchestrated background rips through a complicated array of instrumental call and response. Most producers render Seal tunes as muddy porridges of sanguine noise, as though the man's work were indistinguishable from Enya. Not so on this album.

The Generics shoot high here, tackling difficult vocal challenges without permitting studio magic bail them out. With its driving 4/4 rhythm, Uptown Girl is surprisingly tough to translate to a vocal medium. The result of this ambition is an album that never seems trite or redundant.

I don't think the men from the University of Maryland have put forth an album that suits their talents here. But neither can I suggest you pass up all the good stuff that's here. At its best, Still Hungry, Still Singing is a remarkable album, and the group is at its best frequently enough to invite this disc into your collection.

Still Hungry, Still Singing takes you on an interesting journey. The best metaphorical parallel I can offer is this: It starts out like a nice, pleasant dip in a warm pool, but as time passes, the water cools off until icy cold. Then, exactly at track 10, you run out of the pool and jump into a much-appreciated hot tub to thaw out your frigid body.

If you're not digging my aquatic analogy, let me put it to you another way. The latest album by the University of Maryland Generics starts out sounding like any well-sung, well-produced collegiate record (and maybe even a little better, because the production is crisp and clear, and the soloist on Geek in the Pink is pretty groovy). After this opening track, however, the songs start to become a bit more ho-hum, occasionally falling victim to some noteworthy pitfalls. Despite the silky smooth solo work by Jordan Mills on Sir Duke, for example, the track is rendered less than iPod worthy by the terribly shaky and uninspired interlude scat sessions. And even though the arrangement of Crazy attempts to establish a unique perspective on this oft-covered 2006 hit, the performance falls flat on its face due to lackluster energy. Still, the performances are adequate and there is, on the whole, a decent level of talent to be found.

Uh, that is, until we reach track 7, Beautiful Disaster. That's when something goes terribly awry. To begin with, this track sounds nothing like Uptown Girl, because it isn't Uptown Girl, even though the liner notes tell me it should be. Oh well. Honest mistake. The problem is that track 7, which is actually Beautiful Disaster (and not the 311 version), lives up to only the latter half of its name. Intonation, energy, and precision, all of which were solid on earlier tracks, suddenly fly out the window. Chords don't lock. Soloists are pitchy. And basses are rarely in sync with each other. Put Your Records On functions similarly, as does Uptown Girl, which is actually track 9.

So what is going on here? Well, it turns out that Liquid 5th, who produced the other tracks (and quite well as far as I'm concerned), got the boot for tracks 7-9 and was replaced by Blue House Productions. My guess is that the group's treasurer miscalculated the availability of funds to record and produce ten tracks with Liquid 5th and when the bank finally ran dry, they were forced to turn to bare-bones production with another set of engineers. (I could be totally wrong, but I could definitely see it happening with my old group.) Bottom line is, the tracks done with Blue House omit the use of pitch correction and really skimp out on the mastering process, and the voices don't carry so well without these resources. Not sure if this is the result of limited time/money, or just the quality of the engineering, but either way, it really brings the album down a few notches.

The final track returns to the smooth, clean production that we heard earlier, but by this point, the damage has been done. Unfortunately, Still Hungry, Still Singing is detrimentally affected by the lowest common denominators in this situation. And while a "2" might seem a bit harsh, I have to ultimately judge this album as a collective body of work. There is too much inconsistency here to warrant a score of "average," and so we learn a disappointing lesson about how valuable the production resources become to the success of a musical work.

To order this album, email