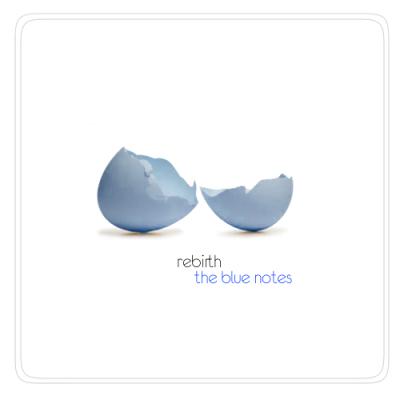 The Blue Notes have been around since 1954. Unfortunately, Rebirth isn't as impressive as the group's a cappella legacy.

Really fun songs open Rebirth, offering the listener nicely packaged candy to forget the missteps on the rest this album. 19-2000 sounds so cool and fresh, it's easy to immediately love these ladies. Whether you zone into the trippy background or Mai Perches' playful solo, 19-2000 has a lot to offer. Likewise, Sweet Escape lives up to its name with an infectiously happy vibe and delightful chorus. If the listener stopped after these two tracks, they'd have a very favorable view of Rebirth.

The remainder of Rebirth is weaker, and at times is a real head-scratcher. The production is very heavy-handed, occasionally venturing into highly questionable territory. Umbrella, labeled a "T2 remix", is comprised of a soloist singing over Tat Tong's fully created background. While hearing a totally new version of Rihanna's hit song is certainly interesting, shouldn't this idea go on a Tat Tong album and not on the Blue Notes' album? A second head-scratching moment stems from When Doves Cry. A lot of arrangement interpretations work for this funky song, but a legato approach just doesn't feel passable. Also, You're My Best Friend and Say My Name earn low marks for redundancy and a marked lack of energy.

Overall, there's a lot of listless singing, unimpressive arranging, and forced engineering on the majority of Rebirth. There are definitely some fun parts, too, but Rebirth just isn't a strong offering.

There's a different kind of album simmering beneath the surface of Rebirth, one that only finds its way into the nooks and crevices of this highly synthetic effort from the Wellesley Blue Notes. Subtle but irreverent, contemporary but with a respect for tradition. It's in there somewhere. I wish I could review that album.

Such as it is, we're left with an end product that seems wildly at odds with the group's musical oeuvre. It seems as though the group's producers (James Cannon and Sandy Chen) baked this pie before considering the ingredients, which are left fulminating beneath the crust. The effect is downright Kubrickian. Apropos of the cover art, I suppose.

Consider the Rihanna cover, billed as a "T2 remix". Soloist Helen Day opts for the Marie Digby vibe, only to have her sincere efforts hacked into digital bits by the studio buzz saw. The dissonance between the two approaches would make for a fascinating musicological study, but it is not pleasant.

Even the Blue Notes themselves seem unsure of what they want to achieve. The arrangement of When Doves Cry intrigues with a plaintive, unstructured opening, only to devolve into a sing-songy 4/4. If you are going to eschew one of the greatest hooks in pop history, you'd better make a compelling case. This is not that.

There are good, old-fashioned failures of execution as well. The obligatory Hide and Seek cover (hereinafter: TOHASC) has been arranged incorrectly. The chords are simply wrong, arbitrarily eliminating dissonances and adding others, while fumbling over the song's delicate stutter-steps. Why T2 Productions didn't set their studio gizmos to fixing this instead of making poor Helen Day sound like Optimus Prime is beyond me.

Oh, and the woo-hoo cat calls on Sweet Escape have never sounded so grating. Yikes.

In fairness to the producers, the soloists don't always live up to the source material. Emulating the Timberlakes and Princes of the world isn't difficult, but does require a singer to seize the moment. When all you have behind you is an auto-tuned wall of sound, the spotlight's on you. I get the sense that some of these ladies would rather be singing school songs than moment-seizing.

The group does groove in the album's later salvos. The Blue Notes were born to cover Lovefool, that delightfully out-of-context 90s hit from the Cardigans. Sarah Stroup, who also stands out on the otherwise unlistenable Gwen Stefani cover, grabs ahold of the original's ironic disco-funk. On Sway, Mai Perches demonstrates why modern revamps of old standards suit this group to a T.

Alas, the hits are few and far between. If the Blue Notes really like the music they've covered on this album, they have done little to persuade me of their enthusiasm. The result is an album that is technically proficient, but joyless.

I don't advise a cappella purists to check out The Blue Notes' new album, Rebirth, but for the rest of us the album has a lot of good music to offer.

Purists may object to the amount of autotuning, sampled vocal percussion, echo effects, and other production gimmicks, but fortunately, in this case those gimmicks tend to enhance the musical experience rather than detract from it. Four tracks in particular are worth mentioning in this context. The song 19-2000 is catchy and upbeat, with deliberate computerized slides between notes reminiscent of Cher's Believe. Umbrella uses background vocals that often seem more like instrumental tones than voices. Both solo and backgrounds are often "chopped" up in interesting ways, too — think of singing into a precisely controlled fan blade. Although Say My Name is a bit repetitive and kind of loud the whole time, it also has some nice effects done with echoes in the melody and with the reverb in a spoken part. And finally, What Goes Around...Comes Around uses tone-like background parts, and a lot of reverb and echo effects; the combination works well. However, I dislike the amount of sustain late in the song — it feels like a pianist forgot to lift up on the piano's sustain pedal.

Despite many good things, Rebirth suffers from a few flaws. A major one is that the soloists tend to disappoint. The only soloist who really stands out features in Sway; she gives the song a ton of feeling, and is helped in part by her "swoop into the pitch" technique which I usually dislike. Sometimes the problems with soloists are with their musical interpretations rather than their voices. For example, the soloist in Lovefool chooses to say "So I cry, I pray, and I beg" with a very affected voice and at times sings a pronounced British "cawnt" instead of "can't", even though the rest of the song had a very American accent.

Another flaw is that many of the songs, though pleasant, are boring and often repetitive. Sweet Escape, You're My Best Friend, July, July, and Say My Name (despite other merits) fall into this category.

There is also one song where a production choice appears to have been a poor one. You're My Best Friend seems very unenergetic, and I place the blame on the sampled VP which prevents any tempo changes. The whole song just kind of plods along.

Lovefool unfortunately feels a bit sluggish. To figure out why, I compared it to Noteworthy (BYU)'s version, which feels a lot more energetic to me. I was surprised to find that The Blue Tones' version actually has the faster tempo! After some careful listening and thinking, I decided the culprit is the vocal percussion: The Blue Notes' sampled VP just hits on beats two and four for most of the song, whereas Noteworthy had much more complex vocal percussion going on throughout the song.

Unfortunately three of the last seven albums I've been asked to review have included Hide and Seek. Does this version offer anything new? No, not really. There were a few problems, and I ended up liking it the least of the four versions I've got on various albums. I don't often criticize groups for being too precise, but that was a problem: sometimes they were too hard with the final consonant "k"s and "t"s. The "hummm" in the next-to-last measure was glaring in its volume, also perhaps too precise, and with way too much "h". And the eighth notes on "di-id" in the line "of course you di-id" were much too loud in their final syllable. The Blue Notes also could have benefitted from a lot more dynamic contrast throughout the whole song.

Rebirth has some impressive moments, makes some wise production decisions, and is a nice, fun album to listen to. I rate the album "a high 3".

To order this album, visit the group's web site or MySpace page or email the group.