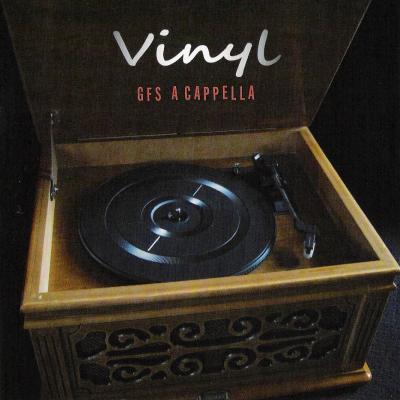 The young men and women of GFS A Cappella have definitely gone through some evolution since I last heard them on When Hairy Met Sushi. I think calling their new sound an "evolution" from their previous one is more appropriate than to say they've gone forward or backward. Things are noticeably different, sometimes for the better, sometimes not so much. There's definitely room for growth as the group incorporates new ideas into their music.

The members of GFS have chosen to make much more use of the studio this time around, yielding generally positive results. The overall sound is much cleaner, the low end much improved, and the percussion significantly tighter and more in the pocket. Unfortunately, misuse of studio effects also contributes to some of the more troubling moments on the album. Hide and Seek is the worst offender. The tuning of the backs coupled with some very abrasive mixing and choice of effects sabotage what could have been a beautiful track. Along those same lines while the quality of GFS' recorded sound has improved, their tuning has not, making moments of rough tuning and blend that much more apparent.

The vocals are still definitely above average for a live high school ensemble, and several of the soloists still shine. However, with autotuned perfection quickly becoming the norm, tuning this rough is really beginning to stick out at all levels from high school to the pros. I would suggest that GFS not shy away from the technology as they continue to explore the possibilities of the studio.

Another thought: this album is too long. Sixteen tracks clocking in at over an hour of music is a stretch for any group these days, and it's certainly more than I want to listen to in one sitting. This group clearly has quite a bit of repertoire under their belt, and I would encourage whoever is in charge of track selection to be a little pickier about what makes the final cut.

As I write all this down, I'm beginning to wonder if perhaps some of my criticism may not be in tune with what GFS wants to deliver as a final product. The long track list and generally live-in-studio sounding vocals suggest that maybe this group is really all about just releasing yearbook albums with all of their current material for friends, family, and fans. If that's the case I say more power to them. Feel free to ignore my picky comments and just keep having fun making music. Some albums aren't made to draw praise from RARB, and there's nothing wrong with that.

On the other hand, since the group did ask for a review, I have to say that there's still some work to be done if they want to be able to compete with the rest of what is out there. I think it's high time this group teamed up with a dedicated a cappella producer. With some extra guidance from someone who knows the business of recorded a cappella, I think these young singers have the energy to make an outstanding album. Until then, this one's for the fans.

Vinyl, the latest from the preposterously named Germantown Friends School A Cappella, um, a cappella ensemble, is average work executed brilliantly. Does that make sense? If not, dig in.

You won't have to dig very far. The first track, Kiss, opens with accidentally pornographic guitar emulation, followed by some fellow unenthusiastically shouting "huh"*. The song then breaks into a robotic groove accompanying a positively nasty solo. Sadiki Philip can sing the tusks off a walrus, but he's saddled with a mélange of wa-na-na's. Now he knows how Gladys Knight felt.

So does Bouyeh Zulu, I'd have to think. Lots of very in tune, and very unenthusiastic, singing ultimately overwhelms I Used to Love Him. The track even ends on a whole note. I didn't know a cappella groups did that anymore.

All of which is strange, because this album fits squarely within the contemporary a cappella paradigm. The Obligatory Hide and Seek Cover (TOHASC) features plenty of swirly digital effects, none of which make the track sound like the original, nor serve to approve upon the same, but the producers clearly know what's up.

I could go on and on, but I won't for once. There are no clunkers on this album, and certainly no clunker solos.

*But, yeah, what is with the "huh" guy from the first track anyway? Is it the soloist phoning in an amuse-bouche before the main course? A courtesy to the one guy who didn't get a solo on the album? Someone in the foyer choking on a chili pepper?

At this point, I should backtrack and note that I have just devoted five dismissive paragraphs to a group that scarcely consists of adult influence. These are high school kids, people. Alas, the cover of Silence is Golden gives me an excuse. A sophisticated song choice, delivered by a splendidly muted Ari Feinberg, building to an improbably poignant apex.

This is an adult ensemble that has earned the right to be treated as such. Thus, I reserve the right to ask for a more emphatic delivery of the keyboard hook on The Final Countdown. I do not feel the slightest bit of guilt asking for a bit more balance between the men and the women. I certainly can't see why I should condone the ponderous (and tuneless) opening to the well-worn George Michael cover.

I want more dynamic arrangements, more innovative percussion. I want music that matches the cover art. I want soloists who care as much about backing vocals as they do about their time in front of the microphone.

Finally, I don't think good singing is good enough for this group. Vinyl is brilliantly good. Whether the Germantown Friends School A Cappella ensemble takes that assessment as a positive or a negative depends on how they want their next album to sound.

In recent reviews of GFS A Cappella albums, reviewers wrote about the group's need to break the boundaries of high school a cappella by turning up the creativity in their arrangements, having more rhythmic precision, and having more control of their pitch. These issues still reside on Vinyl, but I'm not sure about their extent in relation to previous albums. There are obstacles any good high school group deals with to get from good to great. Germantown Friends School A Cappella is still struggling with how to navigate these obstacles.

Vinyl is a smorgasbord of artists you probably know and love. Prince, The B52s, Imogen Heap, Gnarls Barkley, George Michael, James Taylor, Billy Idol, Bon Jovi … there's certainly something for everyone here. The question and challenge is whether or not GFS can maintain the listener's attention on these well-known tracks. The answer is yes and no.

Here we have a smooth production where sometimes the block comes off a bit too hot in the mix, soloists who bring passion but lack some vocal training in the extremities of their range, and arrangements that are driving but quickly become extremely repetitive after the first go through of each song's verse/chorus. This is often the juxtaposition of student groups; greatness followed by mediocrity. There are moments of "Yes! Keep it up!" scattered about, and for that GFS should be proud of Vinyl.

Some moments that needed help on this album are fixable. Hide and Seek is pushed (these are my notes and listen to me sing them) instead of allowing the relaxed, eerie, and ethereal sounds to rise from the arrangement. The studio effects don't help their cause either which may be more a result of the groups' haphazard interpretation of the piece, but it's a voice in the track nonetheless. Mexico suffers from an out of control tempo rather than the lying back with a cold-drink-in-the-hammock feel James Taylor usually invites. Somebody to Love has pitch issues from beginning to end in the block and the female soloist never makes us comfortable; these pitches should be easier for her to sing than for a tenor. Also, the tempo is an issue here. The opening chords of Virtual Insanity are interestingly out of tune in that usually groups start songs in tune and gradually move away from a tonal center. In contrast to the other noted tracks, this one is painfully slow and never achieves the groove of Jamiroquai.

My favorite track is the smooth caress of the female trio consisting of Melissa Braff, Emma Case, and Cara Smith on the CSNY track Helplessly Hoping. These three girls never let the block run away with the song and evoke a great sense of word painting for the listener.

All in all, Vinyl comes across as a good yearbook album from a college group, and a surprisingly good album from a high school group who could probably do greater things with a shorter album and more imaginative arrangements.

To order this album — $17 made out to Germantown Friends School, with "A Cappella" in the memo line — email Allen Drew.