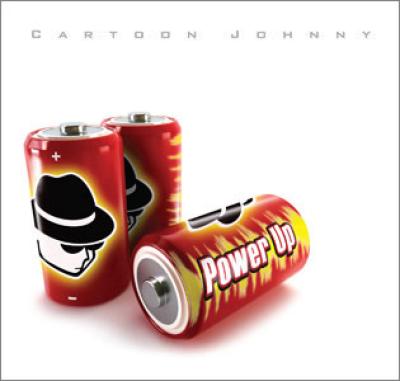 Way back when (2001 to be exact), perennial Harmony Sweeps contender Cartoon Johnny (2005 Mid-Atlantic champs, 2008 Mid-Atlantic Runner-up, 2009 New York champs) was known by the name "3 guys mike" (lack of capitalization is purposeful). Listen to their long-awaited second album, and first studio effort, and they might just as soon be called "One guy mike".

That Mike is Mike Henrickson, the group's baritone, who dominates Power Up, contributing 5 original songs (one with shared authorship), 9 of the 11 arrangements (2 with shared credit) and even a solo for good measure. Oh yeah, and he mixed all but 3 of the tracks as well.

I've commented many times previously that having one person's aesthetic so dominate an album can be a mixed blessing and indeed, it is borne out here once again. The least objectionable are the mixes which consistently sound polished and professional, even as they suffer a bit by comparison to Bill Hare who handled Let's Groove and Rock Your Body and Freddie Feldman on If You Love Somebody (Set Them Free)". Then again, most people would come out on the short end of the stick in such a comparison. And in truth, the entire album is sufficiently slick that you may not even notice the difference unless you read the liner notes carefully and listen for it.

When it comes to arrangements, Henrickson's best work is Walking On Sunshine which uses some nifty syllables to establish the signature horn riff in a medium tempo feel and then switches to the song's actual double-time feel for the choruses. The second verse might have featured a little more complexity in the background rhythms but the end of the song builds nicely with a medley of sun-related songs (Sunshine Day, Here Comes The Sun, Sunshine on My Shoulder) and, in a cute pun, "Sun"... ahem, Son of a Preacher Man. But there is also plenty of mediocre arranging work to be found as well. Indeed, the next best cover arrangements come from Kieran Daly on the aforementioned If You Love Somebody and Let's Groove, though the latter feels more like a technological achievement than a fully realized arrangement, with its mechanical bass and vp dominating the song and the vocal processing just adding to the robotic feel. By contrast, Henrickson gives us a pretty but ultimately unsatisfying arrangement based almost exclusively on "loo loo loo" syllables for the closing track and a thoroughly misguided take on Signed, Sealed, Delivered which pairs a messy hip-hop/rap rhythm with wimpishly rendered descending background chords sitting mostly in the higher registers. Independently, either of these approaches might have worked, but together they sound wildly incongruous. Of course, this song won Best Arrangement at the 2005 Mid-Atlantic Harmony Sweeps, so what the heck do I know?

And then there are the originals, all of them penned by Henrickson. Writing original music of any kind is admirable and especially in the a cappella world where without original music, every group would be a glorified — albeit inventive and diverse — cover band. Unfortunately, Henrickson's knack for writing melodic hooks is scuttled miserably by his penchant for thoroughly banal lyrics. There is some promise in Love Will Decide (at least in the intro, first verse, and chorus), but When Will You Come Home and Walked Away as back-to-back tracks, with What I Want following closely on their heels bring the album's momentum to a grinding halt. The music is reasonably tuneful if generic and somewhat simplistic, but the lyrics, chock full of worn out platitudes, are a tremendous letdown. Compounding the shortcomings of these tracks are the arrangements which — perhaps due to the absence of original instrumentals to mimic or adapt — show a lack of imagination. One of these tracks might have been a pleasant diversion, but as a group they are nearly indistinguishable one from the next, reminiscent of the lesser boy bands of the late '90s. But the Washington Post gave them a wonderful write-up this past May — again, what do I know? Actually, I take that back...what does the Washington Post know about a cappella?

I'll admit that I do feel a little guilty focusing so much of this critique on one person when Cartoon Johnny is made up of six clearly talented musicians, including Mr. Henrickson. And they must put on a heckuva show given their success in the Sweeps. But this is really only a pretty good album that is made just that much better by some snazzy studio work. For a truly first-rate album, CJ might want to seek out more sophisticated original material and arrangements or stick primarily to the covers that, right now, they do best.

With five guys and a lone female singing soprano, Cartoon Johnny certainly has an interesting ensemble. As a result of this line-up, Cartoon Johnny also has a unique sound. They're also ridiculously good singers, happily flaunting their technical excellence and stellar energy levels. On Power Up, their inventive and refreshing covers are awesome. Although their musically interesting originals are lacking lyrically, at the end of the a cappella day, Cartoon Johnny is a really fine group worthy of your adoration.

Let's start with the best covers, which Cartoon Johnny really brings to life. Signed, Sealed, Delivered as sung on Power Up is so snappy and cool, so bold and funky with neat suspensions, the song itself should probably have its own fan club. Walking On Sunshine couldn't possibly sound better than it does here, with Darcy Romano confidently laying it out for all to marvel over. If You Love Somebody (Set Them Free) is also highly notable, this time for its red-hot sizzle. Seriously, stand back or you'll get burned.

On to the originals. Baritone Mike Henrickson wrote or co-wrote all five originals on Power Up. His style is appropriate for the group, and overall, each tune is commendable musically. But as a lyricist, Henrickson has work to do. His material is full of clichés and easy rhymes that drop the songs to a more basic level despite their musical creativity. Take, for example, the chorus of Walked Away: "She just turned and walked away, and I'll never get to tell her all the things that I have to say." Or this repetitive section of What I Want, which is probably copyrighted somewhere: "I wanna be the one that you run to, I wanna be the one that you call, I wanna be the shoulder you cry on, I wanna pick you up when you fall." Hearing a cappella originals is always a treat, but creating total package originals is the best way to add serious credibility to your group.

Overall, Cartoon Johnny is impressive. The group's great performances should appeal to anyone, from the casual listener to the die-hard a cappella follower.

Cartoon Johnny's latest release, Power Up, is an interesting album and a bit of a tough one to rank. On the one hand, the group has turned in a strong collection of eleven songs, five of which are originals, and which feature strong arrangements and generally solid vocals. On the surface it's an A+ album. On the other hand, repeat listens reveal some so-so production choices, a weak low end, and some moments where the groove doesn't quite settle in to where it ought to be. Put it all together and Power Up might be considered an "average" semi-professional release; one with good talent and originality, but lacking some pyrotechnics (the X factor, if you will) that might have ranked it higher for me.

A lot of things are done very well on this album. Mike Henrickson seems to be the mastermind of the band, and his work on this recording shows him to be a pretty talented composer, arranger, and engineer. A good-enough engineer, in fact, that his work stands up pretty well alongside tracks by seasoned vets like Bill Hare and Freddie Feldman. There's no question that Henrickson's abilities are one of Cartoon Johnny's greatest assets.

As I mentioned above, this album contains almost half original material. As always, it's awesome to see groups challenging themselves and the community by performing original music. That said, though everything is well done, I found a lot of the songwriting on this album to be ultimately a little bland. Most of the hooks are decently catchy, but they're also pretty standard in terms of form and progression. The topics covered are pretty standard as well. To be fair, those comments could apply to many songs on the pop charts as well. Still, the bar in the a cappella community has been set pretty high by the likes of The House Jacks and Duwende. Johnny has a great start here, but I would encourage them to be even more adventurous when it comes to their writing in the future.

So, if the production is strong, the compositions are good, and the arranging is high quality, then what's the missing X factor? Some of it is definitely energy and delivery. The overall energy of the album is okay, but the upper voices are often lacking a bit of drive. It's there sometimes (i.e., the "mm bop" breakdown of Walking On Sunshine), but those appearances also highlight the times when that extra flair is absent (i.e., the backgrounds of Rock Your Body, which are smooth to the point of being dull). Similarly, some of the solos are plagued by awkward syllable stress and delivery often heard on collegiate releases. It's a quirk that's even less forgivable in the semi-pro/pro world.

Power Up is a strong release, but one that didn't move me quite as much as I wanted it to. The original material is good, but not as creative as the best. The singing is good, but not as polished as it could be. Cartoon Johnny fans will most likely be pretty happy with this disc, but the group definitely has room to grow.

To order this album, visit the group's website or Primarily A Cappella.