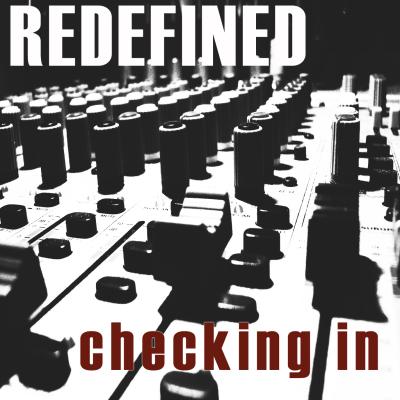 Redefined's Checking In delivers one fantastic lead after another backed by extremely natural-sounding back-ups. Purists will delight at the simple, organic presentation while perfectionists have nothing to complain about pitch-wise. No one would mistake the recording for anything but a cappella, but neither does Redefined strive for anything else (save for just a few seconds here and there). This album is about singing, not vocal imitation. For this talented group, that's the right choice.

Those who crave creative unusual syllables may find too much simplicity here. Those who crave utter syllabic simplicity will likewise be disappointed as there's just enough creativity here to be an occasional distraction. Redefined has struck a balance tolerable to both camps.

Part of loving Redefined is an appreciation of their song choices. Perfectly matched to their leads and so well-suited to the overall sound of the group, you'd swear they wrote these tunes themselves. (They didn't.) Redefined remains quirky, tuneful and light, but never slides into the sticky sweet morass of pure insipid pop. There's always more here.

My personal favorites include Underground, Video, Send Me On My Way and Not Ready to Make Nice. Others are close behind. Each brings such a rich interesting vocal take to the lead that I just follow where they lead.

What would have made every track perfection? Even better dynamics. Even more creative arranging. Even bolder musical choices. And, for me, less distracting syllables all the way through.

Check out Checking In. Redefined won't let you down.

Redefined's Checking In won't make any waves in the a cappella world. It won't win any CARAs. It won't be on BOCA, SING, Voices Only, and whatever other "best of" type compilations are out there nowadays. Yet Redefined has put out an album that their rede-friends will enjoy.

This co-ed group of twenty is chock-full of competent singers. The arrangements are good enough. The percussion is just fine. The production is appropriate. There is no (She Has No Time vintage) Anoop or Sarah Bareilles among their soloists, but musical competency does not equal jaw-dropping vocals.

The size of this group hasn't been captured with Checking In. As a listener, I don't feel like I am hearing the power, range, and dynamics of a group of twenty. The energy just isn't there.

Interesting song selections, like Tables and Chairs by Andrew Bird, are mixed in with overdone tunes like Don't Speak. They do capture current collegiate favorites: Love Song, Send Me On My Way, and Fidelity, of which I must have heard a dozen versions.

The term "yearbook album" has such negative connotations, but we aren't talking teased hair and mullets anymore. Quality recording equipment and engineers are no longer out of reach for most collegiate groups. Two room mics and group takes are a thing of the past. So when I say that Checking In is a yearbook album, I don't mean that in a negative way. The standard for average is much higher than it once was.

And Checking In is simply an average collegiate a cappella album.

Checking In sounds fresh and leaves you satisfied. Nothing here is groundbreaking, but with a good mix of current pop hits and gone-but-not-forgotten gems delivered by very capable singers, it's the kind of easy-listening album that should suit all tastes.

The most defining characteristic of this album is largely an asset. My search for an a cappella album that has a similar production treatment as Checking In was very difficult. The sound here is completely unique, one that showcases natural vocals and makes natural percussion pop right off the track. The group is fully responsible for bringing the goods on Checking In. Nate Mendl, the group's founder and this album's recorder and mixer, is responsible for giving them a solid platform to shine on. Mendl could have used a little more muscle to spice up the backgrounds of Mr. Jones and How to Save a Life, but the arrangers bear responsibility for this, too.

Collectively, Redefined has very good soloists with a wide range of styles. It's hard not to call everyone out for their fine work, but a few deserve extra kudos. Bryn Olson has unwavering confidence on Fidelity, adding depth and grace to her lead. Krista Porchetta pulls off Sara Bareilles with comfortable ease on Love Song. And on the album's closer, Rachel Scheide and Ryan Shedivy are the perfect pair for a laid-back, super-smooth version of John Mellencamp's Wild Night. Most admirably, all of the soloists genuinely add interest and creativity to each track.

To keep improving, it's definitely time for Redefined to step up their game with more complex arrangements, and perhaps some originals, too.

To order this album, visit A-cappella.com.