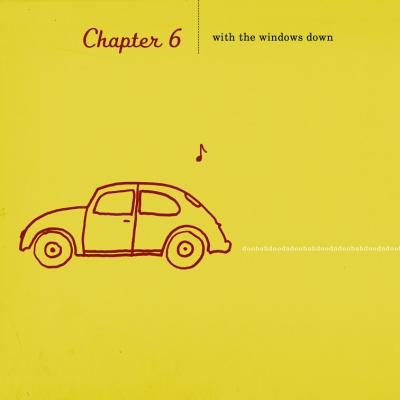 With The Windows Down is as professional as the group who made it. The accomplishments of Chapter 6 are probably the fantasies of college a cappella geeks everywhere. Win the ICCAs! Win Harmony Sweepstakes! Become a professional group and tour the country and beyond! Oh, and be featured on American Idol because a group member has made it to the Top Sixteen!

Chapter 6 has achieved all of these things with seven members: six singers and one arranger, Mark Grizzard. In a unique arrangement, no pun intended, Grizzard not only appears in the album group photo, but also goes on tour with Chapter 6, filling in vocally as needed (according to his website biography).

Grizzard is an extremely competent arrange and songwriter. He manipulates the rhythm of Eleanor Rigby to great effect and inserts some whimsy in Mercy Mercy Me (The Ecology) by having the background vocalize the phrase "an empanada" on repeat. At least that is how it sounds to me. Makes me hungry.

Grizzard favors slow jazz when it comes to his own songwriting, and his meandering compositions, while lovely, need bigger hooks to be memorable. Still, his works are more appealing than the other originals. I've Known You All My Life is a bouncy tune, but feels crowded with too many syllables crammed into each measure. I Wanted To Say sounds like a John Mayer B-Side.

My favorite track is Change the World. It showcases the considerable solo talents of several unidentified Sixers. (The group has, to my dismay, chosen to leave the names of soloists out of the liner notes.)

Another highlight is Hot Fun in the Summertime, which features soulful guest vocalist Chinua Hawk. The other guest spot is less successful. Lisa Bosworth's sweet but thin soprano does not stand up to the other half of her duet.

Lastly, Peg does not beat out Wibijazz'n's fantastic version on BOCA, and I could have done without another cover of Clocks. Nevertheless, With The Windows Down is a must-have for Chapter 6 fans, and a great introduction to their new fans, yours truly included.

A powerful ensemble of jazz singers working under arranger Mark Grizzard's skillful pen, Chapter 6 has a strong handle on their instruments. With The Windows Down flaunts impressive musicianship and difficult interpretations, and keeps the listener pretty happy, too.

The only shortcoming is an issue with the tempo of this album, which could have been prevented with a shake-up of the track order. As is often the case with groups, and probably should be the case, Chapter 6 opens with an absolutely amazing number. You might recognize Pinball Number Count from your days of watching Sesame Street (or your kids' days of watching Sesame Street). Chapter 6's rendition couldn't be any tighter, energetic, or catchy. However, the proceeding five songs have a similar laid-back tempo, delivered with the same mellow vibe. It's pleasant in short doses, as the vocals are still top-notch, but the eventual monotony makes you want to return to the fun of Sesame Street.

More spunk is infused into the latter half of With The Windows Down. I Wanted To Say continuously grows and shifts into a gripping and effective piece that's easy to love. Zippy Peg allows plenty of room for the talented singers to show off and play, which is wildly entertaining for the listener. Hot Fun in the Summertime completely overflows with silky coolness, underscoring the power of Chapter 6. Pour the lemonade and get comfortable, this is the kind of summertime you'll revel in!

I'd like to highlight a few soloists who really add something special on With The Windows Down, but unfortunately individual soloists aren't credited on the liner notes. Particular wonderfulness shines from the leads on Mercy Mercy Me (The Ecology), Highway, and Hot Fun in the Summertime. John Musick, the bass of the group, an ever-present soloist in his own right, is also pretty darn spectacular.

It's a safe bet you'll dig With The Windows Down. These guys know how to work their magic!

In case you are not familiar with them, Chapter 6 is a professional a cappella group based in Illinois. They have seven members, all male. Their website relates that Chapter 6 started as a collegiate group but decided to turn pro when most of the group graduated in 2001. From my perspective that was a good decision, since With The Windows Down has a great sound: a light, jazzy feel that is full of energy. The album also features two guest soloists: Lisa Bosworth on Holly Oak Tree, and Chinua Hawk on Hot Fun in the Summertime.

Chapter 6 really shines on their up-tempo numbers. This is exemplified in the opening track, Pinball Number Count, whose lyrics are solely comprised of, "One, two, three, four, five, six, seven, eight, nine, ten, eleven twelve", repeated with a few alternate arrangements of the words. Sounds boring? Not at all. The moving bass line, live-sounding vocal percussion, and nicely blended upper vocals give the song a solid punch despite the lack of a real solo line. I especially enjoyed the 25-second bass solo near the beginning of the song. Nice job John Musick! I was a little disappointed that he didn't get many other chances to solo on the album.

Eleanor Rigby and Mercy Mercy Me (The Ecology) are two other songs that impress. Eleanor Rigby is one of the great songs of all time, and soloist Jarrett Johnson does it justice. His vocal quality on this song reminds me of American Idol contestant Danny Gokey. The song is kept moving in large part by the VP, which is very impressive especially since it doesn't seem to be propped up by studio effects. I suspect it's jaw-dropping in concert. Mercy Mercy Me (The Ecology) is also highly effective because of its movement, and makes me sway and clap along as I listen. However, in this case, the song is mostly carried along by the inner parts, which sing "buh-dip-ba-na-nah" (or something close to that) through most of the song, with the "na" landing on beats two and four. I thought it was very cool and creative arranging by Mark Grizzard, who also arranged all the other songs on the album. Jarrett Johnson again has the solo, and even manages to channel a little Marvin Gaye on this one.

The only flaws on the album occur when the group leaves the energetic jazz recipe in order to tackle some slow numbers. At times this works, but most of the time the slower numbers felt lethargic and were not as engaging as the rest of the album. Because many of these occur in the latter half, the album unfortunately doesn't leave the listener as impressed and uplifted as it could have. Highway, I Wanted To Say, and Hot Fun in the Summertime were the worst offenders in this regard; they were all well-sung, but didn't leave me wanting more.

Compared to many of the albums I've listened to recently, With The Windows Down is an easygoing, feel-good kind of album. Studio effects are nearly invisible, which leaves me able to picture exactly what it would be like to hear the group in person. I'm just sad that they don't appear to be visiting my state anytime soon!

To order this album, visit the group's website, Singers.com, A-cappella.com, or the iTunes store.