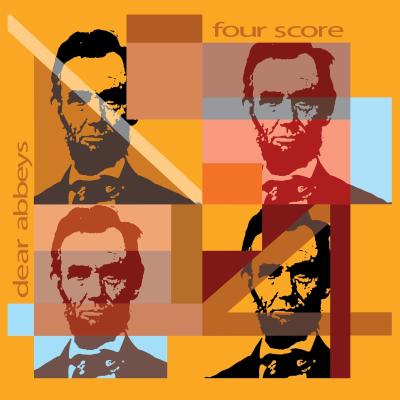 The Dear Abbeys sure can sing. Every song on Four Score has a good soloist. Most of them are great, the grooves are steady, and the overall album timbre is yummy. That warmth propels this album ahead of the sum of its parts, making it a fulfilling listen despite could-have-been-better tuning and a blend that doesn't always lock.

Alex Couch's Tracy Chapman-esque take on Spaceman is the first sign that this group knows how to claim a song for its own. Send Me On My Way confirms the coup. The Dear Abbeys take a lackluster world beat-esque song from the '90s, dress it up like a number from The Lion King, and come up with a big win.

Rock and roll is also on the menu. Hunter Young leads a sultry take on Home, anchored by a smoky, clap-based percussion line. The song sinks into its center of gravity like a dancer leaning into a backbeat with his hips. It's a good ride. In a different vein, Chris Giordano shows he's got synthrock down with very solid performances on Let's Go Crazy and You Get What You Give. Young and Giordano sound even more like rock gods on a couple of rougher numbers, Born to Run and Who Are You respectively. Both of these songs never quite make it into tune, yet they still convey a marvelous energy.

Emmett Patton sounds good on Slow Dancing in a Burning Room, and Couch is back again with another great performance on Turn the Beat Around over a disco-ey, tenor-heavy arrangement. Wonderful is the only song that starts out poorly, but the group pulls together and Nathan Brenner brings the song to a nice crescendo. Not to be outdone, John Gilling delivers a faithful and winning take on Burning Down the House.

The Dear Abbeys' bass section and whoever mixed it deserve a big chunk of credit for why this album is so pleasing. The basslines are warm — there's no other word for it — and they color the rest of the album's presence. It helps that the timing is rock solid and always lines up with the excellent percussion lines. You can dance to these songs. That cohesion brings Four Score together and shows why this album deserves to be on the shortlist of this year's best.

With only one gentle ballad and a whole lotta spunky, happy singing, The Dear Abbeys are clearly on a mission to entertain. Four Score is joyful, amusing, high-quality, and ready for the taking.

Soloists are an area of accomplishment on Four Score, with The Dear Abbeys adding great character and animation to their deliveries. This is a big bonus for the listener, since the album would be quite different without wild, exuberant guys heading up demanding tracks like Let's Go Crazy, Spaceman, Who Are You, Send Me On My Way, Burning Down the House, and Born to Run. These are works that absolutely require an everything-you've-got approach, and The Abbeys easily take care of this requirement with gusto to spare.

There are four spectacular arrangements on Four Score (how appropriate), and all four are penned by the same arranger (no coincidence). Nathan Brenner has a gift for making complex, interesting arrangements that never stray to the too-busy, too-clunky trap inherently possible in a cappella music. Who Are You is an awesome trip on the Fun Train. Send Me On My Way is both powerful and carefree, and the country bumpkin percussion underneath it all adds great depth. Home masterfully explores a heightening funk tension in a groove everyone will enjoy. Finally, the lingering melancholy in Wonderful's chords coupled with a laid-back solo by Brenner himself makes Wonderful a very special track indeed. Way to go.

The energy is here, the catchy tunes are here. If you're a fan of talented all-male ensembles who like to let loose, you're sure to love Four Score.

Like many college a cappella albums, Four Score is uneven: there are some great moments here as well as some weak spots. What raises it to above-average status is an unusual set of songs: I'd rather listen to The Dear Abbeys (or, really, anyone) doing songs that haven't been covered to death recently, and it's nice to hear these guys dust off some tunes that haven't been played in a while.

Most prominent among these is a cover of the classic Who tune Who Are You: it's a song that doesn't instantly lend itself to a cappella, but Nathan Brenner's excellent arrangement captures every nuance of the song's intricacies and its instrumental interludes (which isn't an easy feat!), and soloist Chris Giordano makes a compelling Roger Daltrey. Also, The Abbeys' take on the disco classic Turn the Beat Around nicely mirrors the original's energy and groove, and their version of Burning Down the House bounces with the same liveliness that the Talking Heads channeled. These songs come from three different styles (rock, disco, and new wave), and The Dear Abbeys take on each one with a nice blend of power, energy, and polish.

However, The Abbeys falter with some of their other soloists and song choices. On their version of Feeling Good,* the background bursts with vigor, while the soloist is more restrained. It's an odd juxtaposition, and I wish they'd taken the song in one direction or the other, instead of having a background and soloist that don't quite mesh. Similarly, the backing voices on the album-closing Born to Run capture the wall of sound of the original, but the soloist just can't match The Boss's swagger and oomph. The spoken-word ranting at the end of You Get What You Give barely works in the original song and just doesn't translate well to this version.

Overall, though, the good moments outshine the weaker ones, and solid songs like the sultry Slow Dancing in a Burning Room and the bouncing Send Me On My Way make this album worth hearing.

* The Abbeys have credited Feeling Good as follows: "Original Artist: Michael Bublé". That is not correct. While Bublé did cover the song in 2005, the original recording was by Gilbert Prince on the soundtrack of the 1965 musical The Roar of the Greasepaint — The Smell of the Crowd. The song was written by Anthony Newley and Leslie Bricusse.