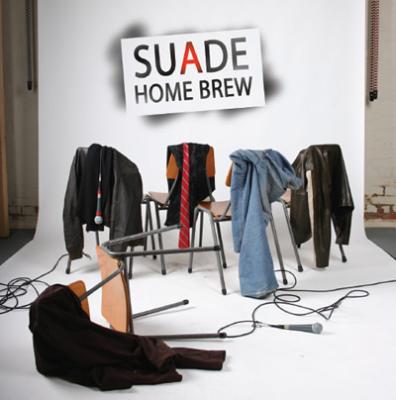 Home Brew has never been such an apt name for a recording than for the latest release by the Aussie quintet Suade. Thematically, this disc of mostly original songs breathes art into some of the more mundane aspects of home life and personal relationships. Sonically, the production techniques utilized by neophyte recording engineer and band member Chris Blain ("The Colonel") gives the disc a down-home, labor-of-love feel that comes across charmingly. The combination makes for a readily accessible and pleasing album that is a joy to hear and review.

You Walk Away is the break-out hit. It is simplistic, subtle, heart-wrenching and angelic in one neat little package. If you have an ounce of emo in your heart, you'll completely fall in love with this song.

Older brother Loz Blain penned (or co-authored) 10 of the 11 original tunes. He mines all aspects of a relationship gone awry to pull out some lyrical gems: from the sexual flirtations that abound in Cheeky Girl to an ode to using role-playing to spice up your sex life in Never Seen My Face Before to the most constricting or liberating relationship that a man can have with his underwear in Singing In My Underpants ...

But the younger Blain is the most creative of all the wordsmiths in the group. His original Miss The Rain is ostensibly about an estranged relationship, but the backstory according to the liner notes is that it was written during one of Australia's most severe droughts in history. So the dire straits of the relationship are reflected in the dire straits of the population without water. For some reason, that just hit a deep well of emotion for me and struck a chord of empathy.

Speaking of chords, Suade's musicality is an important factor holding this group back from having an exceptional album. The arrangements are often bland with no real rhythmic interest or tonal experimentation. Balance is occasionally shot so that passages that are in tune just sound horrible because of an overzealous tenor blasting away in the background. And the mixing will sometimes include the catch breaths at the beginning of phrases and other times edit them out. So you're jarred into thinking that the recording is going to be one way, until all of a sudden it's not. The flaws aren't consistent throughout, but just enough to keep this album from sounding as spotless and tight as it should be if it were to garner a five. But the creativity of the original songs makes Home Brew more than average.

I believe that identity is the crux of the problem that's keeping Suade from soaring to new heights and popularity outside Australia and New Zealand. I'd love to hear more from them to get a feel of what makes them tick. The songwriting skills aren't funny enough to compete with the likes of Da Vinci's Notebook or moosebutter to make them a comedy troupe. The arranging skills aren't strong enough to compete on the level of say Ball in the House or Basix to make them a stellar pop/rock powerhouse. And the singing skills aren't strong enough to make them as captivating as their compatriots The Idea of North for them to be considered more than just adept at singing jazz. I'd like them to take one genre and master it on the next recording, while still excelling at the others.

If you want exposure to some solid a cappella from down under, check out the second disc from Suade and maybe they'll get you to sing in your underpants as well.

Suade consists of five nice-looking fellows from Australia. Despite their looks, wonderful humor (who honors the lives of 89 consumed chickens in their liner notes with chicken head shots and sings a song about singing in their underwear?), and great earnestness, the music of Home Brew doesn't rise to meet the group's charm.

The production on Home Brew is as light as it gets for contemporary a cappella. With so few production effects, the vocals have to be especially good, and the arrangements especially full and unique, to compensate for the emptier sound. There isn't enough of these requirements to plump up Home Brew, shining a glaring light on the empty soundscape. Especially lacking for this deficit is I'm Not Him and Steal Your Heart. I feel sad that it's so exciting to hear a welcome tambourine in First to Arrive given the no-instrument genre, but the tambourine really adds worlds.

This album is full of originals, and praise must be given for this effort. Even better, the group writes the inspiration for each song in the liner notes, and quite creatively. This gives the listener a special insight into the music and the group, and really, it's a lot of fun to gain this extra context. Plus, some of the stories are very interesting. Of the originals, Cheeky Girl stands out for its quirkiness, and Living Enough stands out for its passion. And then there's Singing In My Underpants, which stands out by its very nature. Oh my!

Suade is a ridiculously fun group, and there are some nice moments on Home Brew. With stronger production and arrangement experimentation, they could have a real winner.

Since their song One Week at a Time is full of Australian sports clichés — the group is from Melbourne — I'm sure Suade won't mind me opening this review with an American one: they have hit a home run with this album. It's very easy on the ears, and just plain fun to hear. The group simply sounds great: always great blend, good solos (although none that made my jaw drop), and they basically just sound like they are having a blast all through the album. The group is five men, and the typical song features a bass, light vocal percussion, and two inner parts that often rise higher than the melody on syllables like "ah" and "ooh". In a few songs, the percussion is as light as simple finger snapping.

The name Home Brew was undoubtedly chosen because 11 of the 14 songs are composed by group members, Loz Blain and his brother "The Colonel" (Chris Blain) getting the lion's share of the credits. From Loz's comments in the liner notes, I also gather that the Colonel also did the production work on the album. Most home-brewed songs are both catchy and clever, a winning combination. On my first listen, I assumed most of them were just contemporary pop tunes with which I was unfamiliar.

The home-brewed production also worked very well; the sound engineer let the natural voices shine through. There were only two things that didn't work for me. One was the child's voice throughout So Glad You're Here: it was just low enough that I couldn't make out any words. Annoying. The other was a related issue: a child making some comments at the very end of the album. Unnecessary.

I don't often comment on liner notes, but they deserve a shout out. All of the lyrics for the original songs are included, along with a few sentences giving the reader some inside information about the song: things like how Miss The Rain was composed in the middle of a devastating drought, which coincidentally ended as soon as they started performing the song; and how Singing In My Underpants is dedicated to "Cam and Matt, the first audience members to actually drop their strides and have a boogie in their underdurps at a Suade show". The only credits missing were the soloists on each song. Visually, the notes were very artistically done: two folded out pages of dark text on light background with images of laughing group members in the background, and two pages of light text on dark background with images of serious group members as part of the background.

In the end, it was clear that laughing Suade easily beats out serious Saude. Their website describes the group as having "a sparkle in their voices and a twinkle in their eyes". That twinkle comes through bright and clear, making me smile at the funny lyrics of their songs and at comments like "The production team would also like to honour the estimated 89 chickens that gave their lives during the making of this record" (complete with a gallery of the fallen chickens!) in the liner notes. One can even join in the fun by purchasing the "I sing in my underpants" bumper sticker from their website. Gotta love that. Well done, Suade!

To download tracks, visit iTunes or (with "better quality MP3 files, cheaper and with 100% of the money going to the lads") the group's website, where CDs are also available for worldwide delivery.