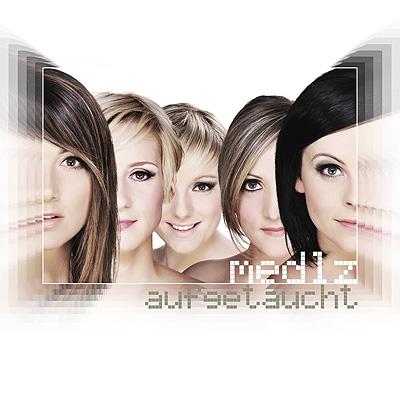 Medlz is a quintet of female jungle cats from Germany. Think tiger-on-the-prowl to get a quick handle on their image. Their voices, in keeping with the jungle cat setting, definitely sound like they're hunting something. These are powerful, intense vocals, that have a way of sneaking up on you and going for the kill.

Most of their music sounds like it's pumping out of a corner club where trendy young people congregate. It's dance-like, it's edgy, and much of it has a techno leaning. It's like Madonna, in her recent heavily-produced era. These women are masterful at manipulating their deliveries, much like the queen diva herself. Want breathy sexiness? Give Er küsst so gut and Sex am Telefon a listen. Want confident, in-your-face women? Entspann dich is the way to go. The message I hear loud and clear despite the language barrier is, "We're hot, and we can sing." I trust you'll hear it, too. RARB reviewers were provided with a translation for this album, and all of the group's own songs are about relationships. I think these lines from Wer ist er sum up aufgetaucht pretty well: "Pull yourself together, it's only a man."

At this level of production, some areas are a moot point. On the engineering front, there are so many layers and artificial boosts and mega-bass that it's hard to hear what's at the core of the instrumentation. But the production leaves the main vocal color alone, and goodness, all five women offer an interesting solo sound while managing to have a killer ensemble sound. If you doubt their abilities given this soundscape, listen to their provided live track Hasso, mein Hund ist schwul (live). Lovely. And Ode an die Freude (what we know as Ode to Joy) is totally gorgeous, with minimal production. Yep, these ladies have their craft down.

German is a consonant-rich language, and that's a bonus for a cappella. It's like throwing in a freebie vocal percussionist. European a cappella is almost always a bonus for Americans, as our friends abroad release a lot of crazy-good tunes for us. aufgetaucht is a bold delight.

aufgetaucht. English translation: materialized. As in, this new album from the all-female German group, medlz, has materialized in my mailbox for me to review. Here's the quick version: the album is very nice in many respects, but ultimately leaves me unfulfilled.

The group sure sounds great, though. The production is first class, and some of the ladies have drop-dead gorgeous voices. The vocal percussion is nicely subdued to match their style of vocal pop, and the two songs that employ additional percussion (Paps and Vielleicht) do so to good effect. The lowest singer's voice is plainly octavized on most songs, but that gives medlz a nice, full sound. The group blends fabulously nearly everywhere, and the arrangement of the Ode to Joy from Beethoven's 9th (Ode an die Freude) is one of my favorite songs I've heard on any a cappella albums this year. In an ironic twist, it's the only song on the album with piano accompaniment, but man! the first soloist — I could lay back and listen to her voice all day long.

Where does the lack of fulfillment come from, then? Well, most of the arrangements don't move me nearly as much as Ode an die Freude did: musically, the arrangements hardly every depart from stereotypical European pop fare. But beyond the music, many of the lyric choices seem banal. For example, the chorus of Sex am Telefon (phone sex) goes like (my translation): "Phone sex only works with you. I don't think I'll ever try it with anyone else. Phone sex only works with you." Friedrich Schiller it's not.

Er küsst so gut (He kisses so well) is another one that falls flat with me: "He kisses so well... he kisses so softly, never the same twice. His mouth knows what I like." The heavy breathing in that song really annoys me, as do the laughter and spoken comments ("Sabine, are you laughing?") that go on during the last minute and a half of Vielleicht.

In short, if you're interested in some sexy female kick-butt German singing, check out this album. Just don't expect a lot of depth.

It's hard to figure out exactly what kind of group the German quintet medlz is trying to be, and that ambiguity is not solely due to the language barrier. (After all, plenty of U.S.-based groups — particularly collegiate groups — dabble in many different styles, causing a weakened sense of identity.)

Instead, while it's obvious that this is an all-female pop group, medlz seems to dabble in styles and songs that are somewhat divergent. Take the innocent/sexy dichotomy, for example: Vielleicht sways with a childlike rhythm, and the song's youthfulness is further enforced by an outburst of giggles towards the end of the track. It's difficult to reconcile that vibe with the sultry Sex am Telefon (literally, "Sex on the Telephone") a few tracks earlier, which itself sounds less like a tribute to phone sex and more like the cooing, trancelike hold music you'd hear while waiting to be connected to your girl-of-choice. (Disclaimer: or so I'd imagine.)

What makes this identity crisis so frustrating is that medlz seems to have no weak spots musically: these songs are in tune and in rhythm, and these five ladies blend so beautifully that it's almost impossible to tell one solo voice from another (1), making the album seem like a true group effort rather than a collection of good singers. And even though they can clearly carry off this lovely tuning in concert (the album's final song, Hasso, mein Hund ist schwul, is a live recording — although you can barely tell, other than a few audience laughs and the closing applause), that's not enough to make for a compelling performance.

Still, there are some lovely moments here: Unser Jahr shimmers with a sassy pop vibe; the energetic choruses in Wie oft give the group a sense of feistiness; and the gritty, guttural Sag mal has a real air of urgency that is missing from the rest of aufgetaucht.

The remainder of the album, though, lacks personality. Don't get me wrong: these songs are pretty; as far as background music goes, you could do far worse than Er küsst so gut or Paps. But the inclusion of Ode an die Freude (the final movement of Beethoven's 9th Symphony; we know it in English as Ode to Joy) as the album's final studio track merely reinforces that this pop group hasn't quite figured out its niche.

(1) note: I took over this review from another reviewer, and I therefore didn't have the CD packaging or liner notes. I can't speak to specific soloists by name or the composers of any of these tunes.

To order this album, visit Amazon (Germany), iTunes, or the group's website.