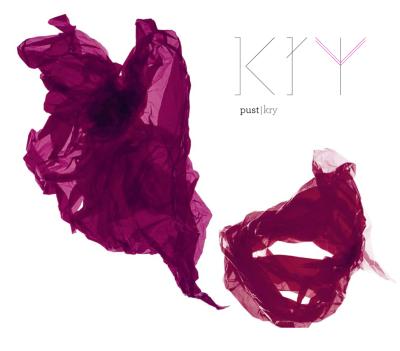 If music is intangible, then Pust's is especially hard to hold. Norwegian Kry requires a lot of connection from the listener. But, if you're willing to give something really out there, something really not mainstream a try, the benefits to reap are huge.

You get the sense that every live Pust performance varies considerably, due to the group's commitment to exploring every possible nuance the human voice can make. Sure, you'll hear singing on Kry. You'll also hear a lot of pitched breaths, and even gasps. Then there are the squeals, squawks, hums, chirps, cheers, grunts, groans, and some vocalizations that really defy identity. And sometimes, there are no words at all. This all adds interest to each track, and is probably seen as a personal challenge to each member: just what can I come up with today? For good primers on vocal variances, listen to En Reell Halling and Innunder Blåe Himmelrand. If you're a frustrated arranger, those two should give you new ideas to work with. There's only one instance on Kry where such vocalizations slipped out of the realm of music and into the plainness of noise, and that's with Hade'godt. I don't know about you, but I hear chickens chattering.

With their many talents, Pust shows us that you can do a lot with a little, that there's music in silences. Some of these tracks, like Gåte, are sometimes rather empty, and deceptively simple. The members like to take turns at the microphone, and often the rest of the ensemble is merely listening. But they're also waiting. It's strange, in a wonderful way, that you can so readily hear tension and anticipation in quiet parts of Pust's music without the help of engineering. There is a constant sense of "What's going to happen?", and the members are creating this on their own, whether their mouths are open or closed.

This is not an easily accessible album. It won't be your "I feel like dancing!" album, nor will it be your "I want to unwind." album. It's more like your "I want to listen to and study really, really creative people." album. And if you're alright with that, be prepared for a very unique experience.

I think every musically-serious collegian at some point shares a similar awkward experience. You're wandering around looking for an empty practice room, only to walk in on the rehearsal of some musical curiosity. Suddenly you are party to a recorder quartet, improvisational drumming ensemble or, worse, "world music". Such is my experience with Pust's idiosyncratic new album, Kry. Ostensibly a vocal jazz ensemble, Pust has made an album that is jarring, beautiful and challenging, but also certainly alienating. Is it successful? Intermittently. The howling introduction to En Reell Halling, billed as a melodic battle between Ireland and Norway does little to ingratiate the listener. The liner notes ask "Who will win?". I don't know, but they ain't pretty no more. That, almost assuredly, is the point. Departing from the soundscape ethos and pop sensibilities of its Scandinavian vocal brethren, Pust is asking us to make some concessions in exchange for that lush sound we've come to love from the region.

This tension is on display during Innunder Blåe Himmelrand, which opens with a whisper thin alto solo that should be familiar to listeners of Scandinavian a cappella. Muted cries are ensconced in discordant hums like a damsel in distress. The chord progressions never resolve our conflict, effectively leaving the listener in two places at once.

Sound like your cup of Aquavit? Then you will want this album. Indeed there is much on Kry, from a conceptual and technical standpoint, that seems invented out of the ether. This is a reckless and spirited work.

Alas, this recklessness is too often measured by overindulgence. Hade'godt, a minute long collection of gibberish sounds, is a catastrophic misfire. It is a party to which the listener is not invited, and had never considered attending, reminiscent of a collegiate hidden track. If the opening is Ireland vs. Norway, this is the Ottoman Empire vs. Yoko Ono.

Farao På Ferie veers from quirky to clownish, with some poorly locked chords thrown in for good measure. Here, and too often elsewhere on the album, the vocal affectations come across as self-conscious. The vocalists are too often imitating bassists, yodelers, didgeridoos, and torch singers, sinking (for example) an outstanding arrangement on Det Bor En Gammel Baker.

Beneath the misfires and the overall density, the listener finds a signature sound, and even musical hooks. This is especially true for tracks like Eg Kan Ro, which corrals Pust's proclivity toward vocal improvisation to a lovely, understated end.

Pust boasts substantial singing talent and demonstrates an admirable refusal to pander. What Kry lacks is a measure of empathy for fresh listeners. One senses here that the group is on the cusp of a truly great album, and for that reason Kry merits a hearing, if only from the next practice room over.

I've never heard a group like Pust before. For one thing, they're really, really good at singing. You'll soak in their gorgeous blend, balance and intonation. You'll be moved by their passionate performances. You'll notice the daring arrangements that sound more intricate than they actually are. But that's not what'll keep you coming back to Pust's new album Kry.

The thing that will likely keep you listening to this record is what they like to call "voiceplay", a truly unique set of vocal skills that isn't exactly singing but may be equally impressive. See, occasionally, the members of Pust tend use their voices and/or mouths as components of the performances in ... unconventional ways (or, in the case of Hade'godt, as the performance itself). Usually, it's akin to chanting, but sometimes it may sound like, for example, microphone feedback. Other times it may resemble chickens socializing. There's really no good way to describe it. If you heard it on its own, you'd probably think it sounded somewhat like a toddler experimenting with his newfound voice. But somehow, in the context of this album, "voiceplay" works, and it works well.

That's not to say it's not a brilliant album anyway. Kry features some of the most astoundingly mystical material I've ever heard from an a cappella group. The whole album has a spiritual quality to it, but it never feels overtly religious. Instead, it seems to embrace an inner peace, a personal spirituality. The singing is so fluid and sincere that I swear you feel like you could swim in it. The last three tracks in particular make you want to close your eyes, clear your mind and soak in the music as much as possible. The album is filled with moments that will send chills down your back.

Pust has some fun, too. The aforementioned Hade'godt is one of the most bizarre minutes of music I've ever encountered, filled entirely with "voiceplay", but that didn't stop me from returning to it four times. The Kolera-vise piece is also an engaging listen — especially if you notice the carefully placed breaths that always land on the beat. And you need look no further than Lukk meg inn to get a sense of the group's daring nature, unafraid to take risks with their arrangements and voices. There's only so much I can do to explain their sound, but trust me when I say you've never heard anything like it. It can't be understood unless you hear it.

Kudos to Pust for boldy pushing the envelope for a cappella music. Pick up Kry, pop in your headphones and absolutely love it.

To order this album, visit A-cappella.com or Norsk Korsenter AS, or email the group.