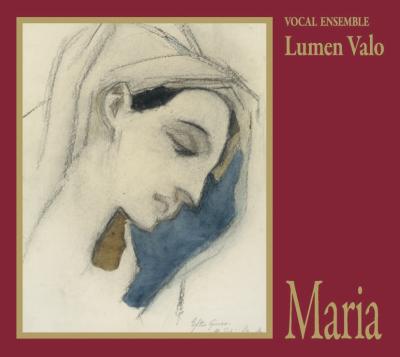 There's nothing like Renaissance vocal music, and for my money, it is hard to top the pure vocal splendor of a well-executed motet. If you agree, you will not be disappointed by Maria, the latest release from the Finnish octet Lumen Valo.

Maria has polish and professionalism, and is technically excellent. Singing is well-tuned and well-blended throughout, and shows marked improvement over the group's previous release, Adoratio. Occasionally the soprano lines came through a bit heavy, but I suspect this may be a recording issue rather than a singing one. Lumen Valo sounds best when moving in block harmony, where the singers' excellent sense of ensemble shines through. I felt the cadences were especially well-executed, milking the harmonic suspense before melting perfectly into resolution.

Unfortunately, I found the interpretations touch and go. A wonderful sense of tenderness infuses gems like Madame d'Amours and Regina caeli, laetare. Unfortunately, this delicacy overwhelms the rest of the album with lugubriousness. The overall feel is more dirge than dance; Assumpta es Maria is a prime example, where languid articulations make it difficult to feel the dance inherent in the writing. The weakest tracks are the longer works: Stabat mater, Ave, Regina caelorum, and Magnificat. Lumen Valo always starts off on the right foot, but seems to get bogged down in the middle sections and at transitions, though Magnificat fairs better than the others.

Overall, Maria showcases a talented ensemble that sings beautifully but with restraint, sacrificing exuberance for delicacy. A better sense of contrast and freedom would benefit Lumen Valo's sound greatly. Yet despite these shortcomings, Maria still does an excellent job at showcasing the miracle that happens when excellent singing meets transcendent songwriting.

The labor of love: the songs were selected from Renaissance choral works about Mary, mother of Jesus (hence the album title, Maria). Masterful composers such as de Victoria, Guerrero, Palestrina, Dufay, di Lasso, and Mouton — all born in 1548 or earlier — take turns helping performers sing praises to Mary. However, you should be aware that this is not a collection of the most well-known works by these artists. I know reviews shouldn't be about the reviewer, but to give you a feel for what I mean here, let me digress for a moment. I myself have sung in a classical choral ensemble for the past six years and own forty to fifty albums of classical choral music. In short: I had not heard a single one of these pieces previously. Out of curiosity, I made a trip to the Choral Public Domain Library, where a good many classical choral works can be downloaded for free (typically the better known ones). I could only find three of the ten songs from this album there.

The fabulous choir: these eight singers from Finland really know how to sing. With only one or two on a part, their blend, intonation, and phrasing are all terrific. The sound reminds me of the Cambridge Singers, but it's more difficult to sing this style in a group as small as this. On only one of the songs did I detect any pitch problems (Ave Regina caelorum by di Lasso, where it seems like they drift sharp). My other complaint here is that while the singing is technically accurate, it is not always with feeling. In what is obviously a very subjective judgment, to me it seems like the group doesn't always convey the emotion of the pieces to the listener.

The static hiss: this is very noticeable at the end of at least four of the tracks: Stabat mater, Ave Regina caelorum (di Lasso), Regina caeli, laetare, and Magnificat. I don't think the cathedral setting used by the group is to blame in this respect, since the static hiss is not present on all tracks. I must therefore blame the producer. Another probable sign of production problems to me is that the warmth found, for example, on albums from the Dale Warland Singers is lacking here, despite similar cathedral acoustics.

I must say that this is the hardest time I've ever had giving an album a "Repeat listenability" score. So, to conclude, let me pose another question: when is the whole not the sum of its parts? On the one hand, I will be listening to individual tracks from this album for years to come. They are marvelous. On the other hand, I probably will never have a craving to listen to the whole album at once. It is hard to listen to 64 minutes of this type of music all at once, even though I love Renaissance music. After much thought, I give the album a "3" in this category, and (due to this as well as the static hiss) a "4" overall.

P.S. There were no soloists; I just chose the score of "3" in that category arbitrarily.

There is a stunning sound coming from Finnish octet Lumen Valo: the voicing and the tone of Maria create an entrancing atmosphere. There's not a sour note or a moment where these singers break their focus, not on the entire recording. It has all the precision of a studio recording but the warmth and timbre of a performance in a majestic church: resonant and transcendent.

Even on longer songs — the eleven-minute Magnificat and the fourteen-minute Stabat mater — the choir never relaxes its intensity. The one change I wish for on these longer pieces is what I wish for on the album as a whole: more dynamic range. I wish the quiet moments had been quieter, but more importantly, I wish the climaxes had been even louder and more intense. It's not until the last thirty seconds of Stabat mater that the song intensifies — but only in the singers' tone, not in their volume. If you weren't listening that closely, you would miss it, and I wish there were more moments here that would really reach out and grab the listener's attention with their power.

The unfortunate result for an album whose volume rests at a constant four (on a scale from one to ten) is that it can sound a bit monotonous. There's not a lot to differentiate one song from the next, since they all sound fairly similar in style and tempo. Perhaps that's what the members of Lumen Valo intended; after all, Maria will lull you into an inspirational trance. I just wish they had a few moments that really took the listener on a more auditory journey, since they have so much going for them already with their pitch, tone, blend, and overall mood.

(A note about my album-wide rating in the "Soloists" category: there aren't soloists on this recording per se. I interpreted that category to reflect the caliber of individual voices that rose above the ensemble when the song called for it. No one voice ever stuck out from the group as a whole.)

To order this album, visit Fuga.