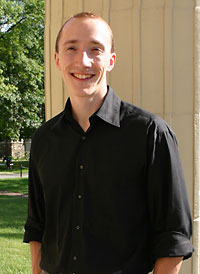 A CAPPELLA: At Reed College Ben was a founding member of the short-lived Seven Deadly Sins, supplying percussion and wailing falsetto at their one and only performance of their one and only song. At the University of Chicago he served for three years as dedicated vpist and occasional baritone for Harmony Eight (now Ransom Notes) and led vocal percussion workshops at the University's Jewish A Cappella Festival, Striking a Chord. While fleeing Chicago for Boulder, Colorado, Ben sang tenor and percussed for Extreme Measures. He currently helps to direct a student group at Bard, the Orcapelicans. He is also a Certified ICCA Adjudicator and a sometime nominator and judge for the Contemporary A Cappella Recording Awards.

ACADEMICS: Ben is Assistant Professor of Classical Studies at Bard College, where he also teaches in the College's Workshop in Language and Thinking. He took his PhD in Ancient Mediterranean Studies from the University of Chicago in 2005, writing his dissertation on "The Origin of Language in Greek and Roman Thought". His research and teaching interests include Latin and Greek, and Biblical Hebrew languages and literatures, Roman history, the history of linguistics, writing, the American comic book, and, of course, contemporary a cappella music. In 2005 he co-hosted with Joshua S. Duchan of the University of Michigan the first-ever symposium on academic approaches to a cappella music, 'Yours in Song', presenting on "Vocal Percussion in Contemporary A Cappella Music".

Before arriving at Bard, Ben taught at the University of Chicago, the George Washington University, the Catholic University of America, and the University of Colorado-Boulder, where he continues to teach each summer. He speaks and/or reads old English, French, German, ancient Greek, Biblical Hebrew, Italian, Lakhota, classical Latin, Russian, and Spanish. He soaks up languages like a sponge; his friends worry about his saturation point.

Drop Ben a line about any and all things RARB or otherwise at bstevens@rarb.org.

128 total reviews including 4 reviews from before May 1998, which predate our database and are not listed here.