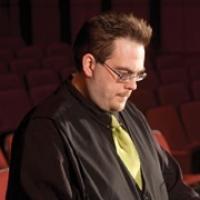 Shawn has returned to his reviewing duties at RARB after a twelve(!)year absence, the latest step in his aca-journey of over 20 years. It started in 1991 when, as an undergrad, he joined the a cappella 50's group sponsored by his fraternity, Phi Mu Alpha Sinfonia, called The Dreamers. Since that time, he has been a founding member of three other PSU groups (None of the Above, the Pennharmonics and the Grace Notes), and was the director of all three groups, plus the Dreamers. He is also a former producer of the ICCA's

In June 2009, Shawn was involved in a devastating automobile accident that, among other issues, resulted in throat operations that has effectively ended his days as an active singer.

However, Shawn's currently more active in a cappella than at any previous point of his life. In addition to returning to RARB, he is the owner of a custom arranging service, Value Vocals, that is a true labor of love for him. He is also the Western Pennsylvania ambassador for The Contemporary A Cappella Society, and is an active clinician both in "real life" events and over the internet via Skype.

Shawn has a thoroughly loving, and exceedingly patient, wife and two children who are already singing along with songs in the car...in tune.

46 total reviews including 9 reviews from before May 1998, which predate our database and are not listed here.