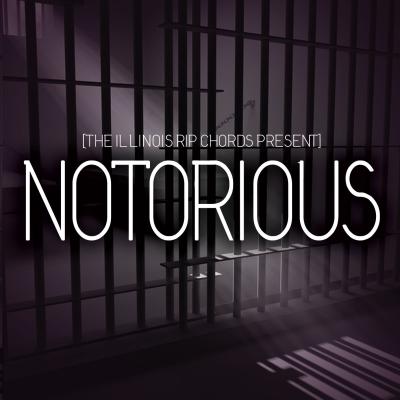 If the Rip Chords become notorious for producing albums like Notorious, they could do a lot worse. While it doesn't reinvent the a cappella wheel by any standard, this album is both well-produced and fun to listen to.

The album thematically comes together around the ideas of love: love maintained, love lost, and love never achieved. It's a simple theme, but not every album has to have a deep message behind it. The musical execution is solid, and I appreciate the fact that the singers keep the material moving and the overall presentation tight and to the point; one song flows to the next at a very rapid pace, and it makes for an enjoyable listening experience.

The soloists are, by and large, quite good and appropriate for the material they are assigned to, even if they sometimes evoke other well-known singers. The soloist for Ridin' Solo is a dead ringer for Tracy Chapman, and Slow Me Down at moments evokes Owl City through the delivery of its soloist. Some of the songs have elements that leave the song wanting, such as an ill-fitting soloist for Eet or the unnecessary edge to the syllables in What I Like About You and White Liar. Others will find regular rotation on my mp3 player, especially What Goes Around... Comes Around, which has a great groove to it.

I am happy to see the group giving credit to the performers that the arrangements were inspired by. However, Yesterday is not "orig." by En Vogue. "As Performed By" or "apb" would have been more appropriate.

There are some steps to take for this group to cross the line over to "top group" status, but there is definitely more to like than dislike in Notorious.

Notorious is a middle-of-the-pack album from the Rip Chords. It sounds cohesive and consistently produced, but a lot of leads aren't memorable enough, most of the arrangements aren't special enough, the bass is quite artificial, and nothing is downright captivating save the group's take on Eet. The group sound here is the strong point - vibrant and happy ladies; everything else from the Rip Chords is passable.

Soloists are mixed. Walk Away could definitely use a natural diva at the helm. Interestingly, the soloist for Eet gives a pretty straight delivery — not embellished or fixed up — and the track is definitely the strongest. It's rich in atmosphere, and the gentle lead from Meghan Kelleher placed atop feels just right. But I think the standout here is Chelsie Johnston, who works Between the Lines with a perfect balance of heartfelt emotion and vocal precision.

I frequently whine around RARB about using a Robot Bass (or "RoboBass") to cover the lower end in female a cappella. One of the joys of all-female a cappella is the unique warmth that ladies blending can bring to a sound recording. That blend is lost when tracks create a big distance between the bass and the block, and this problem-causing RoboBass is heard constantly on Notorious. It's one thing to drop an octave, but it's quite another to add this much machinery.

I also occasionally whine about "Bonus Tracks", as seen here with Yesterday. I really don't see that simply naming your last track "bonus" is indeed a bonus. One of the few times I've seen the term "bonus track" used appropriately was for Gravity on Centerville High School's 2 the Wire, where a guest artist sang the lead for the track, as the song had already appeared earlier in the album. Matters like this aren't a big deal, but sometimes little things add up. Thankfully, Yesterday is a strong closer all the same, with a jazzy confidence that's a pleasure to hear.

More natural grit and risk-taking will help the Rip Chords create a more balanced release, because the potential is here to be something great.

This group has its moments, but the Rip Chords are unable to consistently deliver engaging leads and arrangements.

The two best tracks are Slow Me Down and Between the Lines, both ballads arranged by Meg Hickey. Chelsie Johnston's lead on Between the Lines is the best solo on the album and is strikingly genuine in a way that the rest of the album is not. The backs in Slow Me Down simply consist of "doo" and lyrics. This simplicity would work well for most ballads but is especially soothing in this Imogen Heap-inspired song.

What I Like About You is less effective. I find that most groups have difficulty using "j"-syllables effectively, even in small amounts, but this arrangement uses them almost exclusively. I was immediately turned off by the barrage of hard "j"s that opens the song, and it never let up.

Ballads live and die by their solos. The solo on Eet is sloppy, and there's no excuse for that on a studio recording. The soloist has a good voice, but she scoops up to and pushes on notes and breathes in the middle of phrases. Working and recording this solo phrase by phrase could have worked out the kinks and helped attain a more effortless quality as well as a stronger connection between the soloist and the lyrics. The song also sadly suffers from significant distortion in the intro and from loud dynamics, like in the chorus.

As much fun as they may be to sing, dropping the R&B tracks would make for a better album. What works about the original songs Ridin' Solo and What Goes Around... Comes Around are the soloists and groove. The Rip Chords' versions don't have a bad groove, but each song goes on for too long and the groove doesn't vary. And more importantly, the soloists aren't able to sell it.

The final track is an interesting take on The Beatles' Yesterday. I wish it was longer than 2:18 because it's their most creative arrangement. It's largely homophonic (multiple parts with the same rhythm in harmony) on lyrics which gives it a choral sound that is completely different from the rest of the album. It feels a little experimental, perhaps why they call it a "bonus track", but it's one of the most enjoyable tracks to listen to, and the Rip Chords should consider exploring this sound further.